By Annette Witheridge Friday, July 24, 2020 No Comments Share This:

Robert Speker, events coordinator at Sydmar Lodge in North London, came up with the idea to keep seniors’ spirits up. He chose 12 albums, residents who most resembled the stars, picked their outfits, applied the face paint and took the photographs.

He says the seniors were “enthused and perhaps a bit bemused by the idea” but all happily participated. 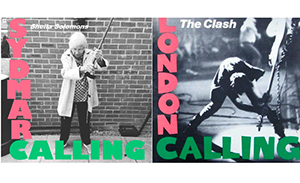 Some added their own flourishes like 93-year-old Sheila Solomons, who used her walking stick as a pretend guitar to mimic British punk group The Clash’s famous London Calling cover (see left). Four care workers added to the fun by recreating a Queen album and Roma Cohen endured several hours of make up to dazzle as David Bowie’s Aladdin Sane (see right). 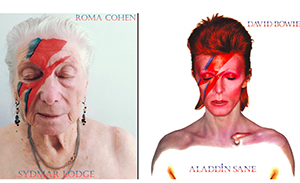 Speker, who has worked at the care home since 2015 and has won accolades for “thinking outside the box” in the past, turned Bruce Springsteen’s Born in the USA into Born in England with the help of resident Martin Steinberg, while others mimicked Michael Jackson, Madonna, Elvis Presley, Taylor Swift, Adele and Johnny Cash.

After posting the photos on Facebook and Twitter on July 10, Speker has been inundated with requests for more album covers and urged to turn the pictures into a book or calendar . He has now set up a GoFundMe page called The Show Must Go On to raise money for Alzheimer’s UK and Dementia Friends.

The home has been Covid-free since lockdown began on March 12 but Speker, who took one nonagenarian backstage at a pop concert last summer and another senior swimming for the first time in 20 years, fears it could be many more months before restrictions are totally lifted.

“I want to make their time as happy and full of enjoyment as possible,” he says of his aging with attitude residents.

For more information go to @robertspeker on Twitter or