In September 2013, Britain’s Channel 4 TV aired “Fabulous Fashionistas,” a documentary about six stylish older women by a filmmaker in her 50s who’s become known for her warm, close-up directing style. It’s been a runaway hit. Still, because the film’s six women average 80 years in age, “Fashionistas” was considered a long shot. Channel 4 aired it way past prime time at 10pm and then, after the film trended on Twitter (possibly a first for a film about older people), the station rebroadcast it – at 1am.

When a couple of U.S. websites – including Senior Planet – ran the video online in November, it became an Internet sensation, scoring more than a million hits in little more than a week.

Bourne is currently trying to interest networks stateside to take on “Fabulous Fashionistas”; according to her, they’ve been squeamish about the age thing. One said they’d have been more interested if she’d made a film about pole-dancing grannies – the film Bourne made, they felt, is too “gentle.”

We caught up with Bourne by phone at home in London shortly before her trip to New York.

You’ve said that you think the Baby Boomers will redefine old age, and the older women in your film are the pioneers. Can you talk about that?
If I think what my mom was like at 60, she was really quite old. We all thought by the time we hit our 50s and 60s we’d be coasting through to a quiet life. But we’re all still working, because it didn’t workout the way we thought. The women in my film are all doing something. They’re driven, and that’s what I learned from them. Retire? That’s the end of it, unless you’re retiring to do what you always wanted to do.

The film’s called “Fabulous Fashionistas” but it’s about a lot more than that
Really, it’s about life and attitude and spirit. The station wanted to call it “Aging Gracefully,” but it’s also not about aging gracefully. It’s about the opposite – it’s about being individuals. “Fabulous Fashionistas” isn’t perfect but it’s better, and it was important to me that young people watch it as well. They’re frightened of old age, and I wanted them to not be frightened of getting older.

What in your own experience led to “Fabulous Fashionistas”?
I love old people. They’re an underused resource. But it’s difficult to get films commissioned about older people – people don’t think they’re sexy, so you have to find an approach that is sexy.

In 2001 I made a film called “Bus Pass Bandits” about old people who break the law. Some of them were just a bit bored – they were trading on their age. One guy set up false accounts in the names of his dead pets; he was about 80 and he was loving it. Another of the pensioners realized you could go to France and buy booze and cigarettes, buy lots of it and then sell it back in the UK. They were all having a ball.

After that I made a personal little film about my mom, who had developed Alzheimer’s. Everything I had seen about Alzheimer’s was depressing; I was terrified. But my mom taught my daughter and I how to laugh through adversity and how to have a wonderful relationship with her. I wanted to make a film about Holly, Mom and me having a relationship and enjoying ourselves. 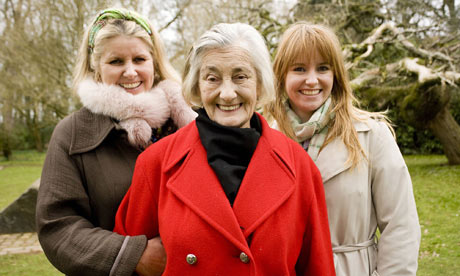 With “Fashionistas,” I’m in my 50s. I don’t want to just wither and die. I was looking for role models to inspire me – women who are squeezing the pits out of life. These six women in their different ways showed me how to do that.

Originally you were going to make a film about stylish women in New York. What happened?
After my last feature documentary, “Jig,” I was looking for another big subject. I’d come across Ari Seth Cohen’s blog Advanced Style and we met and were discussing making a film together. He’s put older women on the map, no question. We spent a year in discussions about the film as I was trying to raise funding for the film. He was making his own film with a friend and I think both of us assumed it would be finished by the time I was funded and ready to go. But when I was ready to go, his own project was still ongoing so there was a bit of problem with him going ahead with me. So we agreed to call it a day and he continued making his own film about the New York women.

Six months later, I was talking to Channel 4 about my next film and they asked me, ‘Why don’t you just make the film in Britain?’ I was a bit wary because British women are not really as stylish as they are in New York. But we went ahead anyway and I think the film that emerged was probably better for having been done in the way it turned out.

How did you find the six women in your film – and what were you looking for?
I wanted to admire them – I couldn’t admire someone for just looking good. There had to be another dimension.

It took two years of research. It became a labor of love. I talked to lots of wonderful, inspirational women, but most of them weren’t stylish enough, unusual enough or quirky enough. I wanted to find a variety – every woman had to bring something different to the table. What united them was their spirit.

While I was looking I talked to quite a few models – but I didn’t want to include women who’d been modeling all their lives. In my film, Daphne Selfe was discovered as a model at the age of 70. For me that was a wonderful story of hope. That defied expectations. I liked the fact that there was a degree of reinvention –the idea that something different can happen.

With Sue Kreitzman, she had had a life as a cook and then had an epiphany and became an artist. The idea that you can go off and have an adventure or do something new excited me.  With Jean, she had a husband for 57 years and then she found a new lease on life. I told her, you represent every woman who loses that and thinks her life is over.

“Fabulous Fashionistas” is really quite personal. I’m curious about life and how you live it. Seven years ago I had cancer, and that was a life-defining moment. Once you know life might not last as long, you want to make the most of it. It’s not the club I wanted to join, but it’s given me a perspective on life that’s much more focused. My antennae are sharper now in my work. So I was looking for something and I found it in these women: You can be hopeful and embrace life.

Do you think Fabulous Fashionistas can help change the way we define age and our expectations about it?
I think it has got a power, and if it changes two people’s attitude to the way they approach old age, that’s success for me. If it gets people talking, it’s another tool in the effort to change people’s thinking about old age. That’s success for me. That’s what you want with any film you make – that it gets people talking.  My film is there now as a tool for other people to use.

Click here to see Senior Planet’s piece about The Fabulous Fashionistas and another taster from the documentary.