“[Vogue editor] Anna Wintour is past 60, yet every issue and every online email is focused not only on Gigi, Kendall, and Bella, but also what they’re doing and what they think. Really? They are lovely girls but that are just that: girls.” —Online commenter

Who woulda thought? Vogue magazine has taken a stand against ageism on the runway and in fashion mags. In an online editorial, “We Need to Talk About Fashion’s Ageism Problem,” the magazine’s fashion news writer Janelle Okwodu points out that there is no shortage of mature models out there — so why aren’t we seeing them?

More interesting than Okwudo’s opinion are the comments under her piece on Vogue.com, where several readers have suggested that Vogue go beyond talking about the problem and start featuring older models in its own pages.

“We follow fashion, what we need is your stylists to pick those garments which compliment our age rather than making us look dull or showing off the bits which are not great- like knees.”

“Yes, and what about Iris Apfel?   More style in her little finger than a lot of these “babies” have in their entire bodies!!!!   Style has NOTHING to do with age – it is a state of mind – you are born with it!  And heaps of older women (and men) have so much style and fashion nous – which has taken years to acquire and refine!!!”

“Every issue of Vogue Magazine and Vogue.com filled with the same group of 19, 20 and 21 year old models that are on the runway…. If Vogue is going to write about this problem, let them be the leaders in correcting it.”

Then again, do we really need beautiful older models?

In the same week that Vogue took on ageism in the fashion industry, art-and-style blog My Modern Met suggested that the success of 59-year-old model Yasmina Rossie (yes, 59 is ancient in fashion) signals that an age revolution in the industry is already underway. But Modern Met’s Facebook page offended many of the blog’s followers, these three words especially: “empowering women everywhere.” 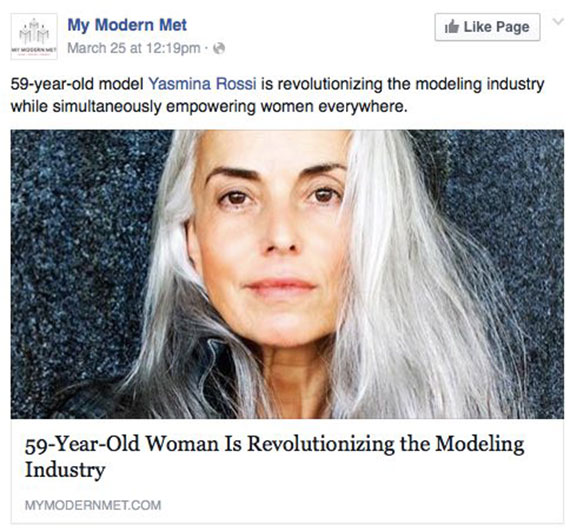 Does the fact that the world is celebrating a beautiful older model “empower” you? Or is it a case of same-old. As one commenter wrote:

“Women: you can be subjected to impossible standards even at 60. Try to contain your excitement”?

“Because she looks like a different species than most of the rest of us, and can get modelling jobs, she is empowering us? What does she have to do with me? Congratulations on being beautiful, it is awesomely lucky for you…but really, it’s a little ridiculous to think it affects most of us other 60-year-olds at all.”

And the discussion was underway. One commenter was unimpressed by Yasmina Rossi but pointed to 81-year-old model Helena Norowicz (pictured above). Another felt empowered by any representation of beauty in an older woman:

“I see that a lot of people seem kind of offended that this was called empowering, but I think it kind of is. She has about 20 years on me, but I think it’s heartening to see an older woman’s beauty and sexiness being acknowledged, whether her beauty is ‘classic’ or ‘lucky’ or not. Maybe by the time I’m her age it won’t be anything out of the ordinary for beauty to be appreciated in women of all ages.”

Is representation empowering? Would Vogue’s inclusion of older models help to stem ageism, as some commenters there suggested? Or is representation of older people in mass and online media only valuable when it reflects qualities other than a beauty that’s unattainable to the majority of us?

Issues of age and ageism are coming to the fore at a time when we can all weigh in (thank you internet). So, what do you think?

Let us know in our comments section below. We’re listening!

33 responses to “Older models: Empowering or Not?”