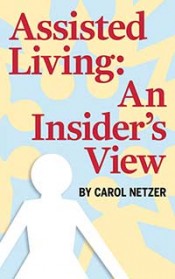 Carol Netzer made a big mistake. Then, she wrote her way out of it.

After her husband died, she found that the Brooklyn home they had shared for 40 years turned into “a querulous stranger, full of demands.” An old leg injury flared up; she came down with the flu; she became underfed and weepy. Her daughters convinced her to move to an assisted living facility, and she agreed, leaving her brownstone Brooklyn neighborhood for Cadbury Commons in suburban Cambridge, Mass.

She was miserable there.

Knowing she had to change her life, she moved back to New York, picking the Hallmark, a senior residence in a crowded residential neighborhood in Lower Manhattan. Then she wrote an e-book about her experiences, combining sharp personal observations with practical advice for anyone contemplating assisted living. (The book is now also available in a print-on-demand edition.)

The book, “Assisted Living: An Insider’s View,” came out of her sense of despair, says Netzer, now 88 and a retired psychologist. “I did it to save myself. I found myself very engrossed in it, very interested.”

Netzer also runs an acid-tongued blog, “Overheard in Assisted Living,” which is full of real and imagined observations like:

Senior Planet recently talked to Netzer about the e-book, the blog and her next project.

Your wonderful blog is “Overheard in Assisted Living.” Reading it before I read the book, I thought it was hilarious. After reading the book, I see the quotes as much more poignant.

Somehow, it’s easy for me to make these snarky comments and invent the people who say them. It’s a mix of real and invented comments. The ones that are invented, it’s the kind of thing that I hear around here. “If I could find an old-fashioned woman, I’d move to Jersey.” This attitude of an era before women’s liberation; he’s right back where he was 50 years ago, with his wife, Rosie.

There’s a new “Overheard” post several times a week. How do you gather that many good quotes?

I keep my ears open. Making the move to assisted living is freighted with feeling, so people talk about it.

Let’s talk about assisted living. Your book is a critique in part – if you were going to design an assisted living facility, what would it look like?

All the literature points to the ideal as being the approach in Denmark and the Netherlands: Buildings in residential neighborhoods that are two stories with communal kitchens, so people can get to know each other. Inside, open doors. Low-rise, with shopping and facilities nearby, maybe a park or a library. All this is in the service of not being locked in an old people’s home. As you age, it’s inevitable that you’re being marginalized out of life and into death. Anything that keeps you in life is good.

Is there a frame of mind you’d urge seniors to adopt so they continue to have a stake in their community after they move in?

Be open to the differences and be aware, when you move in, that assisted living is a different kind of community than anything you’ve known. Do things that please you. Rose Frisch, a scientist at the Center for Population and Development Studies at Harvard, brought her piano with her to Cadbury Commons. In her 90s, she had a driver take her about three times a week to her office at Harvard. If you have a talent or skill, bring it with you. Find two or three people who would be interested in learning Italian, or whatever it is.

One of the things you mention missing is meaningful, personal conversation : talks about losing spouses or how adult children turned out. You also describe people undertaking very dignified, serious actions, such as being loyal visitors to friends who no longer recognize them. Why this chasm?

There’s something that mitigates against talking seriously. Some of it is politesse, courtesy. Another aspect is we’re done with all the painful, awful things. What it really has to do with is death and dying. It’s inescapable. That’s why we’re here. The attitude – and you can’t really knock it – is live as well as you can. To do that, you have to omit death and dying. Some people do quite well at it.

You say in the book about the time after your husband died, “Loneliness affected me in a peculiar way. I felt that I wasn’t serious enough, inventive enough, that I hadn’t tried hard enough to make my life work. I hadn’t tried enough to generate new interests that would keep the loneliness at bay…. Loneliness hurt my pride.” Do you feel like you’ve found those interests?

Part of the way I did it was to write the book. I’m a reader, and I’m a writer, but mostly a reader.

Your book was beautifully written and very smart. Besides your blog, do you have other writing projects in the works?

I’m sort of thinking about writing a book about old age and dying. I have a friend who’s a psychologist who I shared an office with for 15 years and I want to write it together. I would write the subjective – the aches and the crotchets; she would write the psychological effects.

People who’ve read the blog also tell me I have an ear for dialogue and I should write plays.

Why an electronic book?

I have a computer guy, Isidore Elias, who I found on a corkboard in Cobble Hill 20 years ago. He’s also an editor and a screenwriter. He’s in his 60s, but a young 60. He came twice a week to work on it. I wrote; he formatted it as an e-book. The print copy is going to be out in a couple weeks. Print on demand – “Gone With the Wind,” it ain’t.

What’s surprised you most about blogging?

The idea of blogging is rather new, isn’t it? It wasn’t around when I was younger. It’s a different kind of communication, very frank and open. People let their hair down – and how!

What surprises me most is that there are people out there who respond to what I put out with sincerity and enthusiasm. People who are, are related to, or work with seniors in my situation seem grateful for what I have to offer.

What have residents at the Hallmark who’ve read the book or the blog said?

Residents say, “So what did you say about us? Did you say bad things?”

You have to be a little edgy, out of your age group, not be afraid of younger things. I’m not saying you should listen to rap music, but keep reading and doing and making new contacts.

My favorites? Hmm… I like them all, but the ones I like most are the characters around here who show some spunk. So, (overheard on the bus) “He always had a big mouth. Now that I’m old I don’t have to listen”; and (overheard at the swimming pool) “It’s six women to every man here, so that dolled-up biddie can kiss her hopes goodbye!”

11 responses to ““Overheard in Assisted Living”: Blogging to Survive”