Welcome to the opening of the hottest new comedy club in town: Club Senior Planet!

On Thursday, October 15 at 6pm EDT, we’re opening Senior Planet’s virtual doors to four hilarious comics from across the country.

This member-only event is to say thank you to all of our amazing members, without whom we would not be able to offer the wide range of free programming to thousands of older adults across the county that we do!

Want to attend but not a member of Senior Planet? Become a member today by clicking here to make a donation of any size (even a dollar counts). Want to learn more about membership? Click here. Any questions? Email membership@seniorplanet.org.

Read more about our fabulous line-up below: 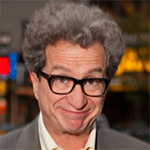 For 30 years Ross has led a comedy attack. Armed with an expressive delivery and real life topics. Growing up with a father who was a Marine Colonel (a nice mellow guy!), grade school snow days, disastrous golf games, catastrophic water skiing outings and middle age medical procedures. Ross Bennett is a high-powered performer who takes his act to the audience and comes back with a victory every-time! Seen on dozens of Television shows, including: The Late Show with David Letterman, 5 appearances on Comedy Central’s Touch Crowd w/ Colin Quinn, 4 appearances on Evening at the Improv, David Brenner’s Nightlife, Dick Clark’s Keep on Cruisin’, Showtime’s Big Laff-Off. Festivals Ross has performed at include: Just for Laugh’s Comedy Festival, Smirnoff Comedy Festival Cape Town South Africa & The Boston Comedy Festival. In 2019 Dry Bar Comedy released Ross’ full length special “Comedy…For The Rest Of Us” which has been viewed millions of times. 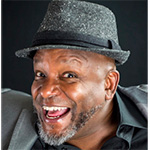 Tommy Chunn (read more here) knew from a very young age that his calling was to make people laugh, including himself.  His charismatic personality and boyish charm is impossible to resist.  Through highly animated facial expressions, physical contortions, masterful use of word-play, innuendo and dead on point impersonations, Tommy tells stories which draw from the hardships of his own life experiences, falling nothing short of hilarious. His smart-eclectic style breaks through the bounds of ethnic and social division. 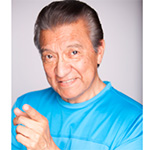 Larry (read about him here) has been a touring standup comedian since the 1980’s. He lives in Los Angeles and has numerous tv credits including: Standup Revolution with Gabriel Iglesias, Comics Unleashed and Showtime’s Goin’ Native. As an actor he has guest appearances in Hot in Cleveland with Betty White, the HBO/Cinemax series The Erotic Traveler, and the CBS sitcom The Millers. It might surprise young video gamers to know that Larry is also the voice of Nightwolf in the popular Mortal Kombat video game. Recently Larry has performed in Madison Square Garden where he was the opening act for the very popular Gabriel “Fluffy” Iglesias. He has toured with Fluffy around the world. A highlight of Larry’s career was performing in Amman, Jordan with the King and Queen of Jordan in attendance.

Robin Montague is a Standup Comedian, Comedy Writer & Voiceover Actor. You can currently Binge Watch her on: The Netflix 25th Anniversary of DEF Comedy Jam, Gotham Comedy Live, The Chris Rock Show, The Chappelle Show, & Sex and the City (“Frenemies” Episode). Watch her videos on YouTube and follow her @Robinisfunny on Instagram & Twitter. 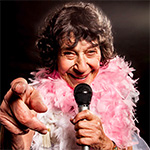 Lynn Ruth Miller (info here) started doing comedy on stage when she was 70 years old. She was dubbed the new Joan Rivers of Fringe Comedy at The Edinburgh International Fringe. Now 85, she made the top 4 comedians in America’s Got Talent, 2008, won People’s Choice in 2009, Branson Comedy Festival, the finals in Bill Word’s Funniest Female Contest 2009 and semi-finals in the SF International Comedy Competition and Star of the Brighton Fringe Festival in 2009.

She has been performing at the Edinburgh Fringe Festival since 2005. She is a regular at the SF Punchline and The Stand in Scotland and made the top 100 in the UK in Britain’s Got Talent. She won the TO&ST AWARD 2014 in Edinburgh for best Cabaret Edinburgh Fringe, 2015 Liberty Award, Leicester Comedy Festival; 2015 finalist Old Comedian of 2015; London. She has numerous five-star cabaret and comedy shows that she has toured all over the world.

Photo by Bogomil Mihaylov on Unsplash