Consumer Electronics Week took over the Metropolitan Pavilion in NYC June 26 – 27, and Senior Planet was there, scoping out what’s new and searching for the products that best serve seniors. We asked three bloggers to name their “best in show.” Click here to read more about the award and here to see see all of our Best in Show awards.

Technology looked like the young people’s game it’s considered to be if you focused on the people in the exhibitor booths at CEWeek, the annual consumer electronics show in New York City.

That perception changed when I checked out the attendees. I saw a lot of gray-haired men and women like me eagerly engaged in conversation with those youthful entrepreneurs about the merits and specifications of the latest gizmos, gadgets and innovations on display.

Generations working (and playing with electronic toys) together is a fine thing to behold.

My mission for Senior Planet at CEWeek was to find just one product or service that was either created especially for seniors, or that could be used by or adapted for seniors – the best in show for old people.

After a couple of hours of walking the exhibit area, I’d seen portable chargers for phones and tablets in many sizes, shapes and colors; fashion-forward earbuds and headphones; a wide variety of cell phone protectors (I was quite taken with one that had a steampunk quality to it); several services to help customers cut the cable TV cord; games controllers; a new digital hearing aid and even a heart monitor for the family dog. With three or four exceptions, most products were incremental improvements on tech gadgets we already know and love.

Not to say that makes them any less fun and/or useful.

The wireless iHome speakers – widely available at electronics stores online and off – were attractive in design and color alone. But I liked them even better after learning that NFC (near field communication) technology made the often irritating process of Bluetooth “pairing” unnecessary. Just tap the speaker with your music source, cellphone or tablet, and voila! – let there be music. 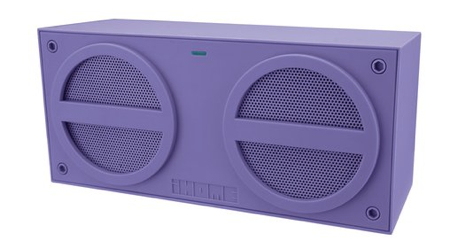 Nice technology, but not quite what I was looking for.

It was hard to resist the enthusiasm of the 25-year-old founder and CEO of Laundry Puppy, Aaron Cohen, as he explained his free pickup-and-delivery dry cleaning and laundry service.

Customers may order pickup via text message and their clean clothes are returned within a day – sometimes the same day – at the same price they would pay if they did the dropoff and pickup themselves.

So far, the service is available in parts of the New York metro area, with beta testing underway in areas of New Jersey, Miami, Boston, Philadelphia and Washington, D.C.

An old-school, perennial service made more efficient by new technology, it’s good for busy people of all ages, and it is good, too, for elders who may not be able to get out and about as easily as they once did; so I shortlisted Laundry Puppy, along with those iHome speakers in my quest for Best in Show.

Then I found the Skulpt booth. But first, let me tell you what happened to me earlier this year.

The doctor diagnosed peroneal neuropathy (also known as – no kidding – foot flop) due to a damaged peroneal nerve, and the neurologist he sent me to said I had already lost five to ten percent of muscle mass in my lower leg.

In my case, the damage was repaired in about 10 weeks with some at-home physical therapy, and now I am concerned about rebuilding the muscle I lost. I work out regularly but have no way to know how I’m doing.

That’s why Skulpt stopped me in my tracks. The company has developed a new technology that can accurately track muscle fitness with a device that is about the size of a smartphone, and the moment I saw it demonstrated, I wanted one to measure the muscles in my legs.

Skulpt’s AIM device is so easy to use that no explanation is needed. Just press one side of it against the muscle you want to measure. It sends a small electrical signal through that muscle and within a second returns the number of your MQ or “muscle quality” (defined by Skulpt as a “measure of a muscle’s strength and definition”) along with a second number giving the relative percentage of fat versus muscle.

What Jose did not mention is that the AIM is an outgrowth of a proven medical technology his company developed that has been used in U.S. hospitals and clinical research programs for the past several years to study patients with neuromuscular diseases and conditions. It even has been used in collaboration with NASA to study the impact of weightlessness on the muscles of mice that have been to outer space.

The AIM is obviously useful for fitness buffs of all ages who want to track muscle quality. But I realized right away that for seniors it can be more than a tracker; it could become crucial to helping more people maintain their physical health as they grow older. Here’s why:

Sometime in our 30s, everyone begins to lose muscle mass and function. It is called age-related sarcopenia and although it is mostly caused by inactivity, even people in good physical shape are prone to muscle loss later in life – after age 65 or 70, when it affects pretty much everyone.

Sarcopenia leads to frailty, musculoskeletal weakness, then to falling down and inevitably for some, to broken bones – a deadly serious difficulty for seniors, a high percentage of whom never recover.

There is a treatment for sarcopenia, and you have probably guessed it: activity, activity, activity – specifically, resistance and strength training; any kind of exercise that increases muscle strength. Being able to easily track the progress of such a program is a breakthrough for seniors.

This is a product I can be passionate about for myself (I cannot possibly be alone in wanting to watch my day-to-day progress) and for all seniors who are working hard to maintain their health. Watching those numbers improve will be my inspiration (like watching a bathroom scale, if you’ve ever been on a weight loss program) to not slack off my fitness plan.

You can find out more about the Aim muscle tracker here. It can be pre-ordered now at $169.99 [too bad that Skulpt raised the price so soon- ed.]. After release in the fall, it will sell for the full price of $199.99. 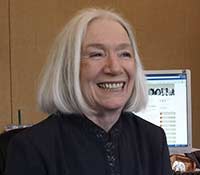 Ronni Bennett became a pioneer elder blogger a decade ago when she launched her blog Time Goes By; she has since become a major voice in the blogosphere on aging and agism. Ronni is a former TV news producer for such shows as 20/20 and the Barbara Walters Specials, and the first managing editor of CBSNews.com.