What does turning 60 mean for a woman today – a woman who came of age in an era of visible women and who is reaching this milestone at a time when invisibility is still a common experience in older age.

New Zealand photographer Jenny O’Connor was approaching 60 herself when she started wondering: What would hitting 60 mean for her; and how were other women her age experiencing the moment?

O’Connor decided to focus her lens on the question. Many months of shooting later, her project resulted in an unusual book of word-and-image portraits: “Visible: 60 Women at 60.”

For her project, O’Connor spoke with and photographed 60 women who were turning 60 – most of them had responded to a Facebook post inviting participation – and asked each to write something about themselves; whatever they wanted to say. Then she built a photo shoot around each woman’s story, complete with props and costumes.

“I didn’t want it to be about women who have done great things or are well known, because my belief is we all do wonderful things,” she says.

A self-taught photographer, O’Connor works seven to eight months a year as a business consultant as a way to back her artistic work. “Photography gives me the ability to connect with people, hear their stories and do something with those stories through a visual medium, which is quite exciting.”

Since the book’s publication earlier in 2014, portraits from O’Connor’s series have been shown locally. She’s hoping “Visible” will eventually tour as an exhibition.

O’Connor spoke to us by Skype from her home in Wellington, New Zealand.

What inspired the title for this project: “Visible”?

My working title for the project was “Seeking 60,” and as the project grew and more women agreed to participate, we’d actually meet up. Lots of conversations came up around who we are, what we are thinking about when we’re 60, reflecting back on what it would have been like for our mothers and grandmothers to have been our age. The word “Visible” kept coming up because I think we shared this milestone feeling of being more certain about ourselves in some ways, but less certain in others.

So many of us now know that we are way more visible than our mothers and our grandmothers ever were. We’ve fought for things; we’ve been up front in human rights and other fights in our generation. Women found their voices in our generation. They went to work and they made choices about their lives. And most of them are still en route.

But there’s that little thing that niggles away at the back of the mind: “But, what now?” We’ve sort of been visible, we’ve done things that other generations have never done, we’ve found our voice, but is it going to matter? And how do people perceive us? 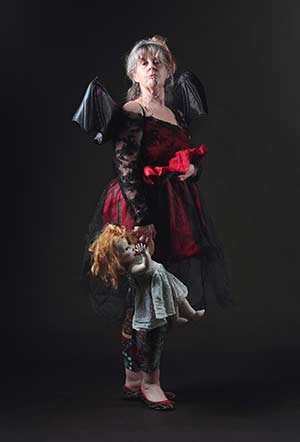 Did your initial goal change as the project unfolded?

Originally it was just going to be an exhibition, I didn’t originally intend to do a book. At the 40 milestone gathering [when 40 women had signed on] I said to them, I’m starting to think that this probably deserves to be sitting around on coffee tables rather than just a one-off exhibition event.

I never thought of it as being “my” project.  I felt it was very much about us as a community of women with a shared experience of being this age. I wanted them to feel they had a big ownership in it. So for me having that sense we were doing this book together was really, really important. 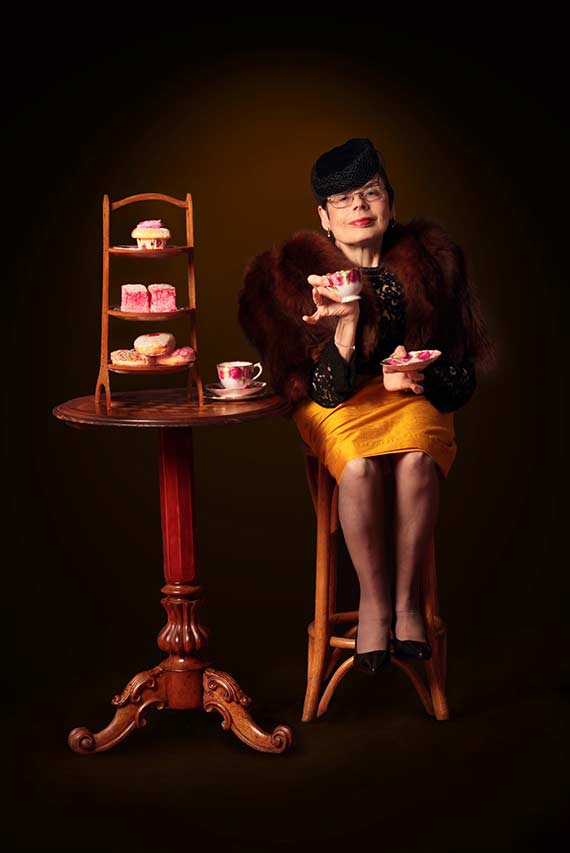 The images tell stories – what was your process in creating each woman’s portrait with her?

Three things were non-negotiable: it would be full-length, it would have a consistently dark background, and the women needed to be looking straight at the camera. ‘Other than that, the world’s your oyster,’ I would tell them.

We would meet up for an hour or so and talk about how they’d like to be photographed. Inevitably they’d ask, “What am I going to wear?” And I’d say, “Well, it depends on what you want to say about yourself.” So we talked about the introducing props and styling. Sometimes I went to their homes to look through their wardrobes with them. Sometimes I would source the props, sometimes it was them. It was a quietly collaborative process. Then when they’d turn up on the day for the shoot, we would just do it.

Afterwards I would chose 10 or 15 out of the set and I would let them come up with the one that they liked. Sometimes It wasn’t the prettiest photo of them. It was all about what the picture said.

I had no input into their words. I felt that they knew themselves well enough and that is part of what this whole thing of being 60 is about – you can write your own words. You’re in charge.

I’d never met Ro Cambridge, the woman with the dress made out of newspapers [pictured at top]. She’s a writer and we came up with this idea of making something out of books. So we went down to the local secondhand shop where she bought a whole bunch of books and disappeared. When she came back she’d ripped the pages out of these books she’d bought for 50 cents each and glued them onto these long strips of brown paper.

Seclusion
Solitude
Detachment
Interiority
Some of what I appreciate
About this stage of my life.

She said she learned at a very young age that it was wise for her to be secretive.  And she said, “I’m not sure if I can do this, Jenny. I’m not like these other women and I don’t want any fuss around me.” So we talked about how we could portray that. I went down to the local costume shop and found a few capes and things like that, and that’s how we did this photograph.

Julia Bracegirdle, the woman with the bike, is a breast cancer survivor and actually has a missing breast. It’s interesting that people don’t notice it. We had quite a conversation about that because we didn’t know whether the photograph was going to be about her being a breast cancer survivor or her doing Ironman stuff.  We decided it’s about who she is now, and if people look at her in this shirt they might realize she hasn’t got a breast. 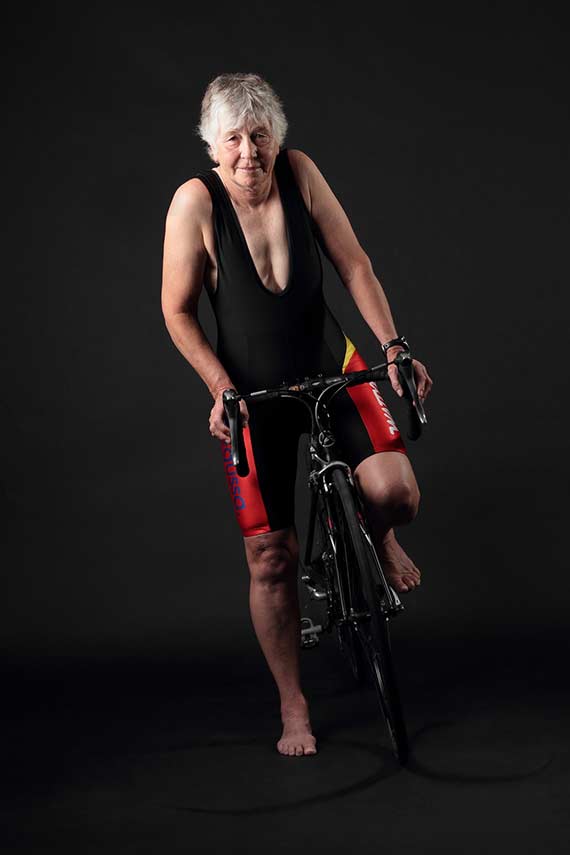 I did a talk for a group of photographers and one of the women wanted to know about the photograph of Ros Rice with her avatar. Ros is quite open in her commentary about having met her husband through online dating. The woman at the talk said, “That’s so weird for a 60-year-old.” And I told her that’s what this book is all about. It’s all about saying or challenging some of those perceptions of what you think. She said, “But that’s something that teenagers do.” Well, no. Clearly not! It’s a really good example of blowing away some of those perceptions of what women at 60 are doing in this day and age. 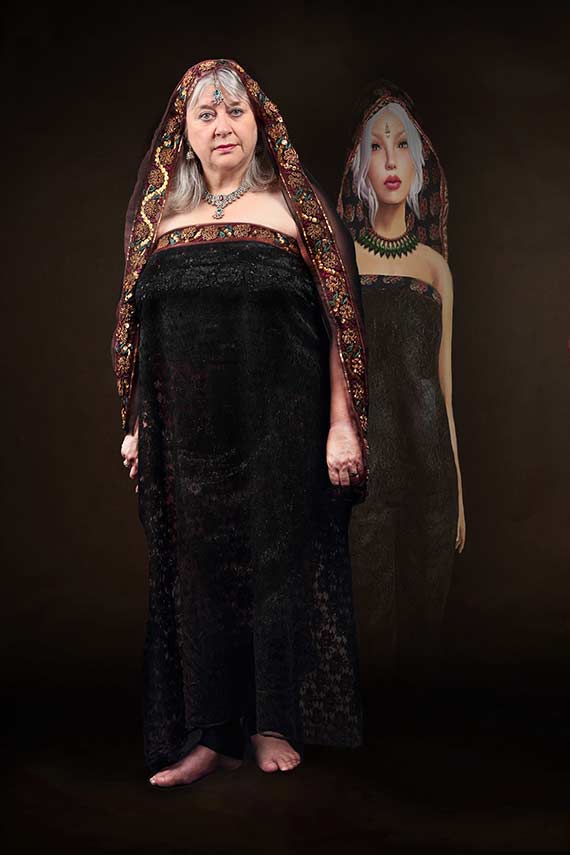 I think my 60-year-old self would tell my 30-year-old self not to be so damn sure of myself. However, I would probably also say take risks. Don’t play it safe. Take sensible risks. Because it’s all about the journey, isn’t it? I had my children very young, so I’d also say, don’t be afraid of missing out on things, because there’s so much time to do what you want to do in life and you don’t have to do it in the order everybody else thinks you should.

What does “Aging with Attitude” mean to you?

Aging with attitude is that sense of knowing yourself a lot more and of ‘I can be who I am now and really nobody needs to tell me how I should dress, how I should be.’ And it’s about bucking those stereotypes. We’re not sitting around knitting, we’re doing stuff, we’re active, we’re intelligent.

Being a grandmother to my four teenage grandchildren is a huge part of my life. I thought they would have lost interest in me by now, but not so. Our relationship is stronger than ever and as a grandmother it’s lovely that they perceive you as aging with attitude. You’re modeling for them.

Watch a video slideshow of all 60 portraits

“Visible” isn’t currently distributed in the US, but you can see more images in this video.

How did sleep suddenly become a challenge?
Healthy Aging

Heatwaves hit older people harder, with results that could mean hospitalization or even death. Get the facts here and stay safe!
Coronavirus

Monkeypox: What We Know Right Now

Reducing the cost of your internet bill or receiving free internet services is now easier than ever! Here's how with help from Senior Planet.