This is the first in a series of posts on digital culture from DigiDame, aka Lois Whitman-Hess.

Everyone is talking about it. Everyone is doing it. There is no way I’m not going to tell you a little about Pokémon GO so you can impress the young ones in your life with what you know.

Pokémon GO is a mobile game on your smartphone that requires you to walk around your neighborhood to catch Pokémon in the real world, which is combined with augmented reality.

Wikipedia explains augmented reality (AR) as “a live direct or indirect view of a physical, real-world environment whose elements are augmented by computer-generated sensory input such as sound, video, graphics or GPS data.”

If you watch the video above, you can see how augmented reality works.

Pokémon GO uses your smartphone’s GPS and clock to help you detect where and when the Pokémon are located in your vicinity. The idea is to walk around the streets (as well as art museums and other public spaces) catching the Pokémon in the game. Remember, while you are strolling around, your real world is interacting with augmented reality. It’s really quite remarkable.

The game is free and is available on Android and iOS. The Pokémon game takes place in a world filled with monsters, rats, snakes, dragons, dinosaurs, birds, eggs, trees and swords. Gamers love that.

I’ve tried to simplify the explanation as much as possible. For more details, read Vox. Click here. 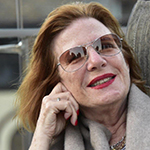 Lois Whitman-Hess has been in the tech business for 50 years. She has been writing DigiDame every day since 2012 because she loves sharing information about the digital world with people over 55 years of age.

One response to “DigiDame: So, What Exactly is Pokémon GO?”