If creating and remembering passwords has become increasingly annoying (and difficult), Bill Burr would like to apologize.

Burr was the person who proposed that passwords have at least eight capital and lower case letters, numbers and special characters back in 2003, when he was a manager at the National Institute of Standards and Technology. Websites fell in line, requiring you to dive into password hell coming up with impossible to recall character stews—which, by the way, you were supposed to change at least every 90 days and not keep on a Post It.

In the 15 years since, the need for passwords, each one different and all of them complex, has grown like kudzu across cyberspace. Almost anything you want to do online—get email, join a group, look for work, bank, shop—requires you to come up with some new combination of numbers, letters and symbols. And then remember them all.

Burr waited until he retired at age 72 to say “Whoops, My bad,” telling the Wall Street Journal last week that he regretted both the recommendation for passwords to use a combination of numbers, capital and small letters, and special characters, as well as the advice to change passwords frequently.

Those complex passwords, it turns out, are easier to crack than simpler ones.

As the popular comic below shows, hacking software can easily decode an eight-character-long combination of letters, numbers and symbols like “Tr0ub4dor&3” in about three days, but a long sequence of random words known only to you, such as “correct horse battery staple,” would take 550 years. 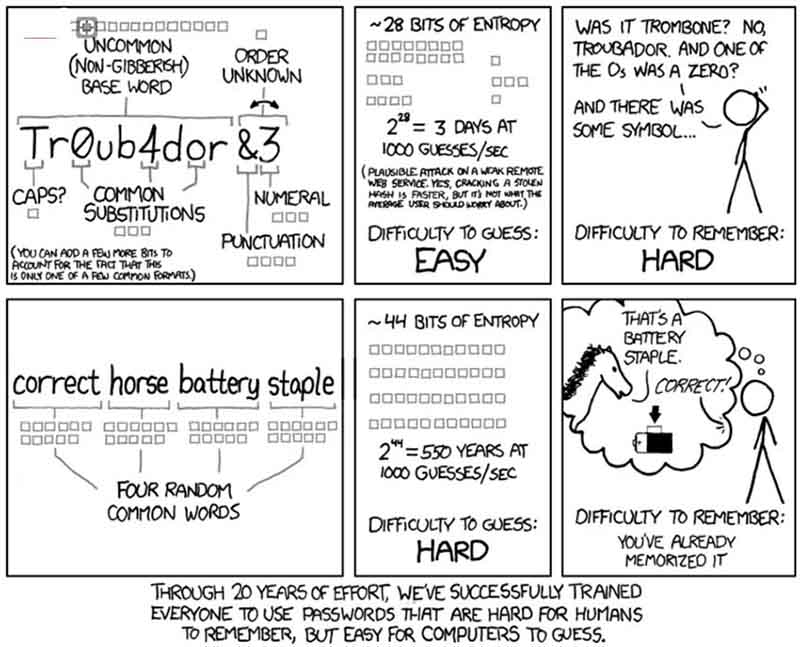 And 8-character word isn’t just shorter; it’s also fairly predictable because most people, in an attempt to stay above water, will use the @ sign for “a,” a zero for “o”and an exclamation point for “i.”

“It just drives people bananas and they don’t pick good passwords no matter what you do,” Burr told the Wall Street Journal.

“Much of what I did I now regret,” Burr said.

4 responses to “Oops: Those P@$sw0rd Rules Were All Wrong”