You could call David Edward Byrd a poster boy for the ’60s. In fact, when Pratt Institute named a Pratt artist for every year of its 125-year history, the art school picked Byrd, who was on faculty, for 1968. That’s the year Byrd created the now iconic Jimi Hendrix Experience concert poster for New York’s then-new Fillmore East. The poster is number 8 on Billboard’s list of the 25 Best Rock Posters of All Time.

As the exclusive poster and program designer for the Fillmore East in New York, Byrd became the go-to guy for a list of bands that reads like a Who’s Who of American rock, including Iron Butterfly, Hendrix, the Who and Jefferson Airplane. He also designed the commemorative poster for the Woodstock Festival. According to Byrd, the Wallkill City Council wanted to nix the festival because of that poster, which they called “obscene.”

During his 50-year career and counting — including a stint as head illustrator at Warner Brothers, where he was in charge of the Bugs Bunny commemorative stamp — Byrd has made the posters for Broadway shows like “Follies,” “Godspell,” “Jesus Christ Superstar” and “Little Shop of Horrors,” as well as creating numerous book and album covers.

At age 75 and as in demand as ever, Byrd recently created the poster for a Prince show in San Francisco and set up an online store for his work. Last month, his poster art was included in one of the first ever online streaming auctions on the new site Bid Network Online. He followed the proceedings — an exciting experience, he says.

Byrd spoke with us by phone from his whimsically decorated home in Los Angeles.

Did you ever expect that the posters you created for rock bands would become as iconic as they have?

No! If I had I would have saved some. Unfortunately, I gave so many posters away like a drunken sailor. To me they were disposable items. You just did it for this moment and who knew that 50 years later you would rue the day that you gave them all away or only saved five. That’s just the way I was, I didn’t plan for the future. I didn’t expect to live this long. Good god.

How did desktop computers and programs like Adobe change the way you work?

Well, I’ve been on Macintosh since 1990, and the first digital art I did was in about 1995 when I worked at Warner Brothers. I made the switch because I consider it a great new tool and a blessing for old conjurors like me. It really saves you a huge amounts of work, and to me it’s just as fulfilling, because I don’t have to do all the dreary things that you must do when you are doing a piece completely by hand. I still do all my beginning work outside on my drawing table and then I usually scan it in and paint it in the computer.

The computer’s really a fantastic tool, but it can’t make you an artist. Often I’m kind of shocked at what young artists these days don’t know. When I started out, the idea of a computer was not in anybody’s head. I did everything by hand. So you had to know how to technically create what you visually had in your brain, which is quite a challenge.

Were you a fan of the bands you made art for?

Yes, absolutely. I was a fan of all of them — though some I liked better than others. Working at the Fillmore East was just a crazy time. A part of my agreement was that I had front row seats in the center, so I saw a million shows, and I was just a few feet away from all these legendary folk.

What was your most quintessential 60’s/70’s experience seeing the bands and working with them?

Working with Jimmy Hendrix was one of the highlights for sure. I did several pieces for him besides the Fillmore East. So I met with him at his office, which I believe was on 16th street near Park Avenue. He took me to the studio he was building and showed me the sound room he had just finished. We sat and smoked a huge joint — it was very powerful stuff. Then he put earphones on my head and he played the entire Sgt. Pepper album. That was a very memorable moment.

What kind of music do you listen to now?

Oh I’m embarrassed. Mostly it’s Mozart, and I’m a real fan of piano concerti. I’m also a big fan of 20s and 30s jazz — really early jazz and big band. And Nina Simone who I never stopped listening to; from college on, I just thought she was a genius. I don’t really follow bands. There are some that I hear and I go, Oh who’s that? And my partner will tell me, and I’ll really like them — bands like Greenday. I’m not a big fan of rap, but I have friends my age who are just smitten with it. It just doesn’t float my boat.

Of all the posters you’ve made, which is your favorite?

I like some of my Broadway work — “Follies” and “Godspell,” and “Little Shop of Horrors” are my favorites. That was a very fertile time in the theater. I did a lot of stuff for Broadway and off-Broadway. Compared to rock, it was very different work, because with rock you didn’t have to sell them on the imagery. As long as it was wacky and hard to read it was good. But with Broadway, you had to represent an entire musical, and the theater folk can be very picky.

What is your opinion of band artwork nowadays?

Some of it is really excellent, it’s just different. It’s more hard-edged and punky now. I like that.

Your work is in major museum collections, including the Museum of Modern Art and Le Musee des Arts Decoratif at the Louvre, and it’s featured in an L.A. Skirball exhibit. How does it feel to have your posters in art collections?

It’s pretty great. I mean, who knew? I wasn’t really trained to be a graphic artist, I was a painter — I kind of taught myself by the seat of my pants,  and a lot of the stuff I later learned not to do was printed. That’s very humbling to see in a museum. You ask yourself, Oh God, why didn’t I do this or why did I do that?

Do you ever think about retiring?

Yes, I would love to do that. It’s my fondest wish. That is why I’m doing this auction, and I also have a web store. I’m starting to push myself so I don’t have to keep working so hard. I enjoy the work, but there are a lot of things I’d like to do that I’m not able to. That’s okay, that’s life. Thank god I’m not manufacturing widgets or selling insurance or all these horrible things that I have no idea what they are like, but they sound hideous.

If you retired tomorrow, what would be on your to-do list?

I would work on a documentary film about my late friend, Richard Amsel who passed away from AIDS in 1985. I would love to mentor a young artist on a one-to-one basis. And I would I would love to work on personal projects, such as putting together a monograph of my work. 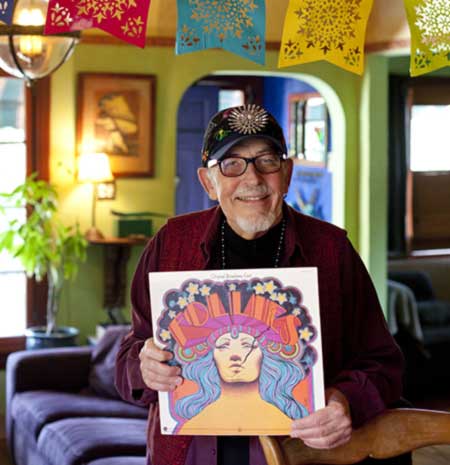 Photo of David Byrd: William Ellis, from The One LP Project, an international photo/music project available for exhibitions and presentations.