Above a CVS in downtown Brooklyn, NY, in a shared workspace that’s styled on Silicon Valley and names its conference rooms for the late rap star Notorious B.I.G., a group of 16 people are trying to invent new tools for older adults.

They’ve spent the past two months doing research and now, on a late summer’s day, the group’s five teams are presenting their initial ideas to assorted brainiacs from the worlds of technology, philanthropy and venture capitalism.

Some of the presenters seem nervous. Most are young engineers, product managers and designers; others are “experts”—people who’ve worked in aging or know it because they themselves are old. They are all participating in a five-month paid fellowship; after this event, they’ll continue with the project as it enters the “build phase.” That’s when ideas become actual products that can win funding and have an impact on people’s lives. (The program’s best-known success is a smartphone app that helps people on food stamps keep track of their balances; it recently raised $4 million in venture funding.)

The fellowship program was devised by Blue Ridge Labs @ Robin Hood, a Brooklyn-based incubator for social innovation that’s an offshoot of New York’s largest poverty-fighting organization, Robin Hood. The process? Present solutions, gather feedback and return to the drawing board. Again and again and again. 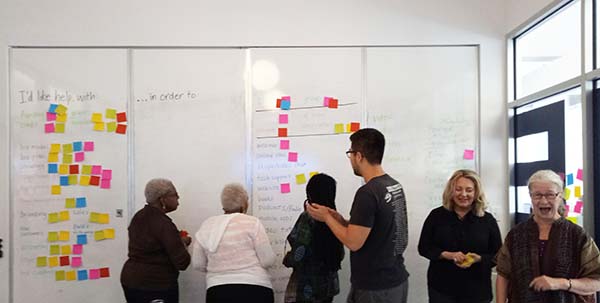 “The idea is that by the end of the fellowship the teams will build an actual thing for people to use,” says KT Gillett, who does community outreach for Blue Ridge Labs. Even if some of the ideas seem fuzzy now, Gillett predicts they’ll take real form after three more months.

At 71, the second-oldest fellow in this year’s program is Eileen McGinn—an “expert” because she is living older age. She’s more than an expert on elderhood. She brings to this project decades of experience as a problem-solver and leader. During her group’s presentation, McGinn looks assured and elegant, her silver hair pulled back in a ponytail, as she answers questions.

Though McGinn’s team is not exactly sure what shape their project will ultimately take, she says that rather than just starting with solutions on a white board, they’ve decided to jump in and actually form Second Act, a NYC support group for women “seniorpreneurs.” She explains that other city programs that train entrepreneurs are geared toward younger people willing to work insane hours; unlike those programs, Second Act is for older women who want to use a skill to supplement their Social Security by $500 to $1,200 a month “so they can live like human beings.”

All of the ideas the teams are presenting today are devised to tackle issues faced by older adults. One team wants to help recently incarcerated seniors ease back into civilian life. Another wants to create an automated telephone hotline for people who fear they might have dementia. Still another wants to merge radio and social work in an as-yet-unspecified way.

Working in a Tech World

Conversations about older adults in the workplace tend to focus on the digital divide. But at least for McGinn, the greater divide for her turned out to be workplace culture. Despite the fact that she spent her career overseas in the development world and knows Excel, she says she wanted to quit as soon as she started the fellowship program. “To me, going into Blue Ridge Labs was like going into a different culture. It’s an open lab tech space. I’m used to being an office. They expect you to use an app to open the door.”

In the third week, she and the other senior experts were expected to lead a design sprint—a one-week exercise in researching a problem, coming up with multiple solutions and choosing the best. “I said, ‘I don’t even know what a sprint is! How am I supposed to lead a design team?’”

But they met the challenge and now in the build phase, McGinn no longer has to suffer the open-plan office; she has begun to do her creative work at home.

The rewards? Get McGinn talking about the project that her team is building, and she positively lights up. Since late June, they’ve been holding regular workshops with seniorpreneurs, including a cake baker, a woman who imports crafts from Africa and a children’s book writer. (Second Act sees freelancing as a form of entrepreneurship.) The team has nudged the baker to use delivery services for her cakes so she can focus on her primary skill: baking. The craft importer has been urged to mark up her goods so she can take a little profit rather than passing the items on at cost. “We give them a lot of homework—and they do it,“ McGinn says, clearly endeared to her beta group of Second Act participants. “They just needed a little nudge. They needed somebody to pay attention to them.”

McGinn isn’t just helping to lead Team Second Act. She also participates as a seniorpreneur. After doing a life inventory, she has decided to return to a previous career teaching English as a Second Language—that is, after the Blue Ridge Labs fellowship is over.

4 responses to “Who Should Design Tools for Older People?”