Remember “Reefer Madness”? Back in 1969, when the famous Gallup pollsters asked Americans if marijuana should be legalized, a mere 12 percent said yes. Fast forward to this year, when a Pew Research Center survey found that a majority, 53 percent, favored legalization.

America has come a long way from “gateway drug.”

Teens who got high in the 60s are now turning 60, and while younger people are still the most likely to favor legal weed, seniors are getting on board, too, according to the appropriately named executive director of Grannies for Grass, Maryjane Bunker. Her organization, founded in 2009, has grown to 54 chapters in all 50 states. And in this year’s Pew survey, 50 percent of Baby Boomers were pro-legalization of pot, as were 29 percent of people 70 to 87.

The attitudinal shift toward legalization may partially be fueled by acceptance of marijuana for medical purposes. In a 2010 survey, Pew researchers found that nearly three-quarters of Americans say they are in favor of their state allowing the sale and use of medical marijuana if it’s recommended by a doctor.

That sentiment is helping to drive medical marijuana legislation across America. While federal law still considers marijuana a Schedule 1 controlled substance, 23 states and the District of Columbia have legal medical marijuana programs; legislation is pending in two more. And 15 states have passed laws that allow for a restricted use of medical marijuana. Along with the three states that allow all uses of pot, that makes 43 states plus DC that allow – or may soon – some legal use of cannabis for patients.

Norml, the marijuana legal-reform advocacy organization, has a fairly recent map (or see an up-to-date list of states that have decriminalized and/or legalized medical marijuana here). Marijuana legal reform is on several state ballots in 2016. 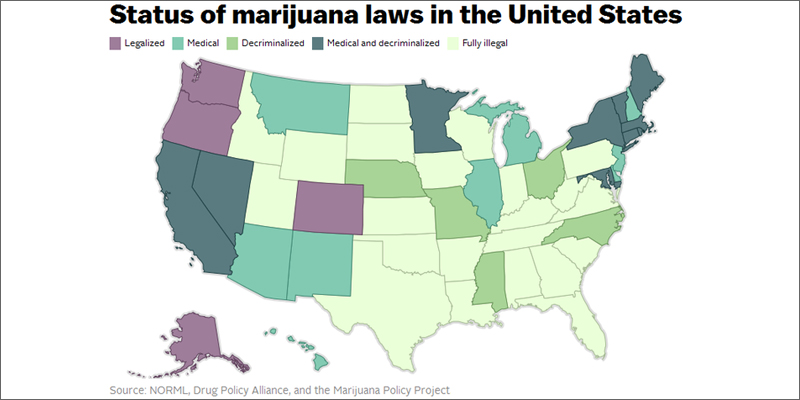 For now, the Department of Justice is taking a “hands-off” approach.

What Conditions Can Marijuana Help?

People who use marijuana medically cite a host of claims, but scientific studies have gone back and forth on the effectiveness of marijuana for different conditions. Recently, scientists gathered the results of 79 clinical trials involving nearly 6,500 people. They published the findings in the Journal of the American Medical Association (the AMA does not support medical marijuana laws but does support marijuana research).

The scientists found ”moderate quality” evidence to support the use of marijuana for:

They found ”low quality” evidence to support its use for:

What does “low quality” mean? “The JAMA report basically confirmed that marijuana is good for a lot of things,” says Frank Lucido, MD, a Berkeley, CA family physician in practice for 35 years and a member of the advisory board for the National Organization for the Reform of Marijuana Laws, or NORML. He points out that the “low quality” conclusion is actually based on the quality of the studies – for example, the methodology used. If the studies had been better, the results might have been better.

Medical marijuana proponents say one reason for “low quality” is the hurdles that researchers have to jump through to study pot’s medicinal effects. In June, the Obama Administration removed one major marijuana research hurdle – the public health service review requirement. Meanwhile in Canada, where medical marijuana is legal, the Arthritis Society is funding a major research initiative to establish whether cannabis cannot just alleviate pain but also repair joints in osteoarthritis. The society says most Canadians who are prescribed weed use it to control joint pain.

Lucido’s patients tell him that marijuana helps with many conditions:

He has found that with migraines, the pain relief can be dramatic. “The pain is gone in five minutes in some.” Other patients find that marijuana is good for coaxing sleep, while others don’t. “I have a feeling it’s strain-related,” he says, with some marijuana strains performing better than others.

“Strains” refers to the many pure and hybrid varieties of the Cannabis plant, which differ in their properties. Israeli researchers have even developed a strain specifically for medical use – it increases the medicinal properties and decreases the high, and has shown some promise as an anti inflammatory. And in the US, one marijuana tech start-up, Potbotics, is developing EEG brain scan technology that is says will help doctors recommend the right strains for specific patients.

Strains aside, research suggests that some forms of marijuana delivery appear better suited for certain medical conditions. In the JAMA review, for instance, researchers who explored marijuana for pain management studied its effects when smoked, taken in oral capsule form, inhaled as a vapor and used in an oromuscosal spray. Smoking had the best effect.

Still, Bunker of Grannies for Grass says some older adults balk at having to smoke marijuana. Many are former smokers who quit and now want to avoid inhaling any type of smoke. After she tells seniors about some of the options, she says, many become much more receptive. Among those options are those that researchers have studied, as well as topicals, which are absorbed through skin, and edibles.

The United Patients Group website compares these and other other methods of consuming pot, many of which are available at local marijuana dispensaries.

Indeed, one medical cannabis entrepreneur stocks California dispensaries with a full menu of baked goods infused with specific measures of the drug’s active properties. Julianna Carella, CEO of Auntie Dolores (as in anti-dolores or “pain” in Spanish) plans to expand her territory to several other states this year.

Individual reactions to marijuana differ, of course, but the JAMA review found that among various side effects, dizziness, dry mouth, nausea, fatigue, vomiting, confusion and hallucination are the most common. Compared with the side effects of, say, ibuprofen (kidney failure or heart attack) or acetaminophen (liver damage), these don’t seem so serious.

There’s another side effect listed, but most users probably wouldn’t view it as unacceptable. It’s euphoria.

4 responses to “What’s the Deal With Marijuana for Senior Health?”