Isadora Kosofsky, an award-winning photographer, was 18 when she first noticed a trio of older people — two women and a man — on the streets of Los Angeles. Something about their relationship struck her, and with their permission, she started to photograph them. The resulting photo documentary, “The Three,” tells the story of Will, 84, Jeanie 82 and Adina 90, “individuals bound by their relationships” the photographer says.

Indeed, it is their relationship — what appears to be a romance between Will and each of the two women — that makes Kosofsky’s photographs especially striking and moving. It’s rare to see representations of older people expressing their sexuality, and even though there’s sadness in these images, the photographer has not shied away from capturing their moments of intimacy.

There’s a common conception in our age-segregated culture that younger people have little interest in people much older than them, but for Kosofsky, age is meaningless. “I don’t view my subjects as senior citizens,” she says. “When I photograph them, I view them as I would individuals of any age range. Going into a project about individuals who happen to be older and typecasting it as documentation of aging, just because the group is classified as seniors, does not allow for an exploration of broader themes.”

The three lived in different retirement homes. How they came to know each other is unclear, but while we don’t know a lot about the relationship between the three, there’s much to be gleaned from the images themselves. We see glimpses of desolation mixed with tenderness. Some images explore sexual intimacy between Will and Jeanie. And Kosofsky allows us to see hints of Will’s emotional struggles — his passion, anger and sadness. 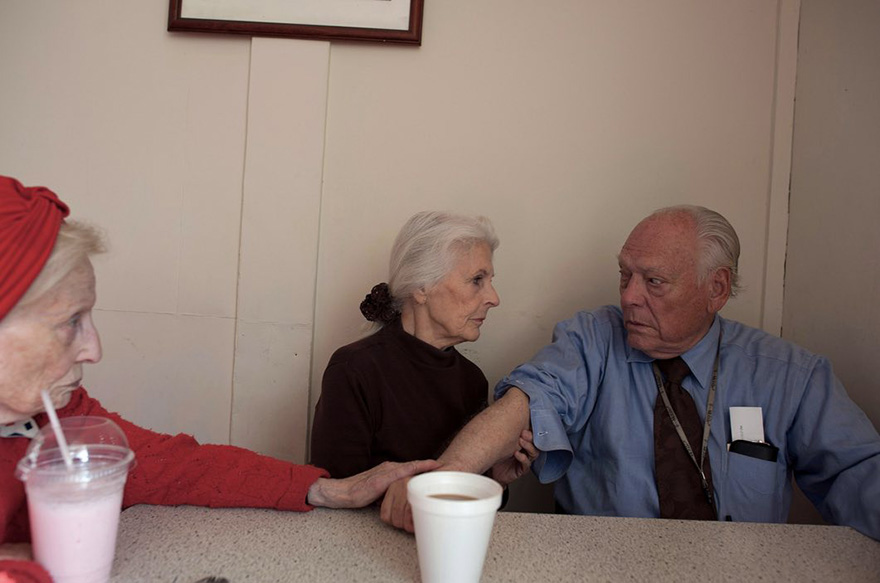 Kosofsky’s remarkable photo series raises questions about aging and sexuality in our society. Who will be making the decisions about our intimate lives as we age? For older adults who lack the capacity to make such decisions, elder abuse laws address many of those issues. But there’s a fine line between protecting sexual freedoms and restricting someone else’s rights due to your personal beliefs or discomfort.

I plan to start the conversation with my adult sons. I want them to understand that sex is something I plan to enjoy for years to come and that it may not look like the traditional relationship model of a monogamous couple. I need them to be accepting and to support whatever decisions I make. I expect them to advocate for my sexual rights when I’m less capable of doing so—and I want them to understand the importance of intimacy across one’s lifespan — mine and theirs.

To see all the photographs in Isadora Kosofsky’s “The Three” series, click here

11 responses to “Intimacy in Old Age: An Unusual Photo Essay”