When it comes to going gray fast, Japan is winning the race. With its birth rate below replacement levels and its life expectancy one of the highest in the world, Japan is the world’s oldest country with the exception of Monaco. Today, one in five Japanese people is a senior and by 2035 that’s expected to reach one in three. Japan’s daily paper the Nikkei reports that adult diaper sales will outstrip sales of baby diapers by 2020; some say that’s already happened.

In the US, by comparison, projections show the senior population reaching 20 percent by 2050. But America will get there – in fact, we could be seeing more people with walkers than strollers in the streets by 2030. So we wondered: What can we learn from Japan?

All over the world, governments and institutions are biting their nails over their swelling senior demographics; they’re wondering how they’ll provide health care and pensions. Others say we should base our projections not on the past, but on the future of aging — a healthier, more productive senior citizenry that brings valuable experience to bear. In Japan, another upside to the aging boom is becoming apparent — what experts call “the silver economy.”  It seems that the Japanese, once known to be big savers, are now big spenders. Today, households headed by a person 60 or older account for 40 percent of Japan’s consumption of goods.

The willingness of Japanese elders to part with their Yen is leading to innovations that will eventually benefit aging populations throughout the world. Already one invention, the RakuRaku “easy” smart phone, has been introduced in Europe.

Here are a few Japanese advances specially designed for the “silver generation.”

With the traditional system of children caring for aging parents breaking down as young people move away to the cities, a new system emerged in Japan: Fureai kippu or  “Caring Relationship Tickets,” a form of currency whose unit is one hour of service to an elder.

Anyone can earn tickets – a senior can help another senior; a younger person can help someone else’s parent or any older person in the community. Tickets earned are then used to pay for service. So, you might be a senior in good health who helps another senior and then use the tickets you earned later if, say, you fell ill or could no longer drive to the grocery store – the majority of Fureai kippu providers are in their 60s and 70s. Younger people earn tickets, too, with many sending them to distant parents so they can use them to pay for services locally. Or as a young person, you might earn tickets and stash them away for the day that you need them. The grassroots system has been credited with helping to build social connections; recipients of services who were interviewed said they preferred paying with tickets than with Yen because the relationship felt more personal and equitable.

The system eventually led the government to establish an official system of social care via compulsory contributions by citizens over age 40.

Fujitsu recognized that older people don’t take to a touch-screen, especially the side-to-side scrolling, so they designed a line of senior smartphones and called it the RakuRaku (Easy, Easy; or Comfortable, Comfortable).  Take the design award winning F-12D model, for example. The touchscreen controls feel more like buttons: You have to use a little pressure to navigate the screen. Scrolling occurs in only one direction, vertically. And the text and icons are large enough to see clearly without bifocals. (A Raku notebook computer is also available in Japan.) For people who are hard of hearing, the phone will slow down the speech of the person on the other end so it’s easier to understand.

The RakuRaku isn’t a dumbed-down phone – in fact, it’s modeled on the Android; it’s just designed to be easier for older eyes and fingers. The phone was introduced in France this year. The US could be the next market.

In a country where one in five people is 65 or over, communities are being designed to be truly intergenerational. In one town in Chiba prefecture, the Yamaman Corporation buys the homes of older people who want to downsize and renovates them for sale at a discount to young families. The housing development also has stop-where-you-want bus service for seniors and day care centers near train stations for working parents.

Another Japanese innovation, the first senior-friendly shopping center, opened last year in Funabashi, which is also in Chiba. Shoppers can order bifocals with same-day service and while they’re waiting for them, try the latest South Korean anti-aging skin creams, get a diabetes check, take a hula or yoga class and buy their groceries from shelves where prices are displayed in large type – all while being carried along on escalators that move at a slower than usual speed. There’s even a senior dating service on site, the Begins Partner program. About 5,000 people were waiting in line to get into the store on opening day. 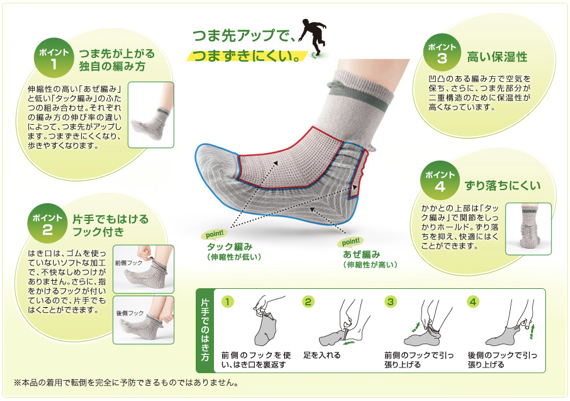 A medical device company, Terumo, invented a shuffle-proof sock that prevents catching a toe on an uneven floor or carpet, a common cause of hip-breaking falls.  The Upwalk socks are stitched to give on the bottom and pull upward on top so that the toes are lifted  with each step. The catch: The socks only works if you take off your shoes in the house, as the Japanese do.

You might say Fujitsu is on a roll — or at least a stroll — with what the company calls “mature” consumers.  This year the company introduced the prototype of a cane with a built-in navigation system that helps you get to where you’re going (it also allows others to track you). And, while you’re being guided, the “The Next Generation” cane monitors your heart rate and temperature.  If necessary, it can call for help, too. See what it can do in this video:

Robotics that aid the everyday lives of disabled and elderly people are high on the research and development list in Japan.  These “helpers” are still too expensive for personal consumption, but they may be the Roomba’s (the robotic vacuum cleaners) of tomorrow.

There’s an autopilot wheelchair that uses a laser sensor and a camera that keep it rolling next to a walking person wearing a special beacon. The wheelchair also “knows” when to fall behind, such as when moving through congested areas.

Combining robotic hardware called WAM arms with computer intelligence, which in minutes “learns” how a person dresses, researchers at The Nara Institute of Science and Technology and Barratt Technology have invented the first robotic arms that can sense the size and shape of a person and help them into and out of their clothing.

Roboview-R3, a robot designed by ART and Vstone, is like having your own R2D2.  It’s a “humanoid bot” that’s designed to help shoppers at the mall.  Roboview-R3 cruises along beside you at speeds up to 1 ½ miles per hour, takes your hand to help you walk through crowds, carries your shopping basket, and tells you essential information about products you might want to buy.

See Roboview in action during its debut:

Which of these innovations would you like to see introduced in the U.S.?

6 responses to “What Can We Learn From Japan’s Age Boom?”

How long this lockdown lasts depends on how seriously we take it.....or not.
Coronavirus

How are you celebrating?