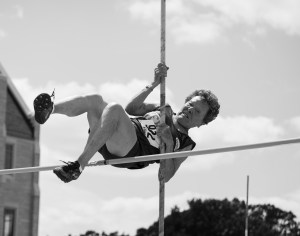 There are active seniors and then there is Flo Meiler. Meiler, 83, is the undisputed female octogenarian pole vaulter in the United States, if not the world.

The picture to the right of her clearing a five-foot, three-inch bar at the 2015 Senior Games (on the right) is part of a remarkable collection created by Vermont photographer Elliot Burg. The black-and-white series, called “Senior Athletes,” can be seen both on his website and as a digital display at the Senior Planet Exploration Center at 127 W. 25th St. from May 14 to May 20.

“The pole vault is an imposing and seemingly impossible discipline,” says Burg. “To see her sprint down the runway, plant her pole, go up in the air and crest the bar was just astounding.”

The Senior Games was Burg’s first major photographic endeavor after trading in a 37-year career in public-interest law for more time behind the lens. But he’d discovered his love for art photography during a year he spent in Bolivia in the mid-1980s. While his wife trained midwives, Burg explored the village of Circuata, using film to record women in traditional skirts, kids in jeans, and the beauty of the high plains.

In 2015, Burg finally retired–although that’s not a term he likes, or which describes his current life. “I like the term changing careers,” he says. “I wanted enough time in my lifetime to do my photographic art.”

Burg first heard about the Senior Games from a racquetball buddy, who urged him to try out for the 2015 games. Burg did, in fact, qualify in racquetball for the 2015 games, which were held in Minneapolis. Sometimes known as the Senior Olympics, the competition takes place in odd-numbered years and pits athletes older than 50 against peers in both their gender and their age cohorts.

“On the first day of competition, I lost my match,” he said. “I said, ‘This is good. I’ll head right over to the track and field stadium.’” 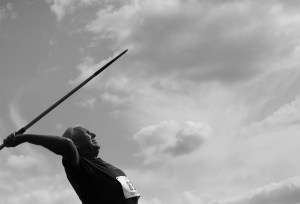 In fact, Burg had prepared extensively to photograph the games. At the Vermont qualifying trials, he introduced himself to both Meiler and her longtime friend Barbara Jordan — telling them he wanted to follow them at the competition. He practiced sports photography, which requires split-second reflexes, by shooting high school lacrosse and track meets.

Although Burg did have a press pass to cover the games, “you had to have a certain amount of chutzpah getting yourself where you needed to be,” he says. That meant doing things like stepping onto the track in front of the finish line with a field of runners sprinting toward him.

One of the photos he’s most proud of is of javelin-thrower Ryan Beighley (above left), who was 90 at the time. “The essence of this discipline is hurling a spear into the heavens,” Burg says. “It was one of the original events in ancient Greece. There’s something sort of Herculean about it.” 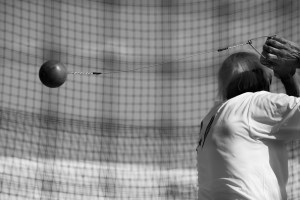 To photograph the javelin, Burg lay down in the grass not far from the athletes. To get pictures of John Poche, 87, and his hammer throw (pictured below), he spent hours sandwiched between two layers of heavy-duty netting; he did the same for the discus event. “Theoretically, it’s possible that somebody could have lost control of the discus and I could have gotten hurt,” he admits.

Although Burg admires all the athletes for “transcending the limits of age,” it’s clear he has a special soft spot for fellow Vermonters Meiler and Jordan. Not surprisingly, then, one of his most prized photos from the event captures both of them crossing the finish line of the 100-meter dash (pictured below). The finish was so close that the friends were separated by only 1/100th of a second.

“This was serious track and field stuff,” he recalls. “They leaned at the tape. And they came up to me breathless and said, ‘Who won?’ I said, ‘I honestly have no idea.’”

It turns out that Jordan had eked out the victory. 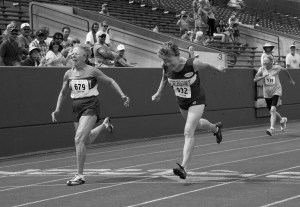 “Senior Athletes” has been exhibited at two hospitals, Dartmouth-Hitchcock Medical Center in Lebanon, NH, and Mass General Hospital in Boston, where Burg had a chance to overhear those who took time to linger. “The photographs,” he says, “were a real source of inspiration for people.”

See more of Burg’s work, including photographs of Cuba, Sunset Park and the March for Our Lives at elliotburgphoto.squarespace.com.

Top Photo:  JoAnn Sampson, 74, 50 meters; Burg says her comment to him was, “We are a generation of champions!”  Learn about how she trained for this event here.

2 responses to “Transcending Age in photos”