A few days after debuting her critically acclaimed, autobiographically inspired cabaret show “Aging is Optional” in February, Tovah Feldshuh climbed to the top of Mount Kilimanjaro with her son. And her year had barely started!

Just talking to Feldshuh, it’s hard to keep up. The 62-year-old stage and screen star’s brain seems to work at NASCAR speed, as complex thoughts about art, life and aging cascade out of her mouth. Up until this year, she was probably best known for her award-winning theater work (four Tony nominations, including her turn as former Prime Minister of Israel, Golda Meir, in “Golda’s Balcony”); dozens of TV appearances (two Emmy nods, notably for the mini-series “Holocaust”); and a handful of character roles in movies. But this year she found a whole new fan base playing ex-politician Deanna Monroe on AMC’s post-zombie apocalypse juggernaut “The Walking Dead,” which wrapped up its fifth season on Sunday night with (spoiler!) her character still very much alive.

Feldshuh chatted with Senior Planet by phone about her various professional and personal projects, how she rejects the notion of linear time and why she is the personification of “aging with attitude.” 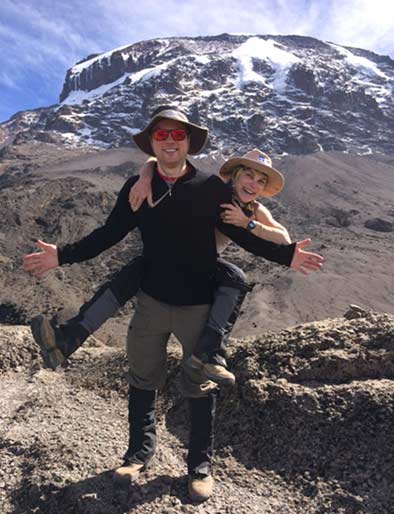 Most interviewers start by asking questions about your career, but I’m dying to know about your Mount Kilimanjaro experience! How did it come about? Did your son talk you into it or was it the other way around?

It was my idea! I had just done an act called “Aging is Optional.” I closed on Saturday, February 21 and on Sunday, February 22, I flew to Nairobi and kept training [for the climb]. On Thursday, I flew to Arusha, which is at the foothill of Mount Kilimanjaro, and Friday we started our first horrendous hike in Arusha National Park in 90-degree heat for five hours with our full packs and everything.

As I say in “Aging is Optional,” recently I have been choosing my trips by altitude. I have been to Tibet, Bhutan, Huayna Picchu (which is the mountain above Machu Picchu), the Atacama Desert and Lake Titicaca, which is where I got this idea of getting to Kilimanjaro while I could still climb it.

Here’s the thing, the first step toward mastery is to know you don’t know. I knew I didn’t know how to climb the seventh highest mountain in the world because I’d never done such a thing, I’d never even come close. I’d done 11,000 feet, but there’s a palpable difference in the amount of oxygen available to the human lung at 20,000. That is the birth of altitude sickness, where the body says hello, you’re having problems, so I’m going to keep your heart and your brain alive, but you know that food? You can forget it. It’s coming up and it’s coming out.

It was unbelievable to climb Kilimanjaro and to be taught by the mountain that there were certain things I didn’t know I didn’t know. When you climb, you do everything for the breath. You go back to your own creation; that first second you came out of the womb, and your breathing becomes your highest priority. Who knew that being a singer for my career on Broadway and in clubs would help me with survival skills? And who knew that six decades on the earth would help me because, as older people, we know we can’t always operate at full tilt.

You go on a lot of exciting getaways with your son.

Yes, he’s my adventure boy. I’ve certainly given my children my point of view about adventure. I think it’s a worthy thing to live your life in rainbow colors – you’re only in this body once. My boy and I have tracked gorillas in Uganda and even gone to the White House; I was invited there last year for Hanukkah and I brought my son. My husband, Andy, and I had a vacation planned at the time and he said, “Are you nuts? You can’t do both so I’m going to cancel the trip.” And I said, “Andy, do you know how much it’s going to cost to cancel this trip? Thousands of dollars. Do you know how much it costs me with the platinum miles to fly to the White House business class? $36. I’m going to leave you Tuesday night on a redeye, and I’m going to fly to Washington D.C. and I’m going to meet the President of the United States and Mrs. Obama, and I’m going to go to the party, and then I’m going to make the 6:30am plane back and I’ll be there for lunch.” And that’s what I did! My life is like one big continual violin bow.

You don’t seem to ever have any downtime. Even when you were offered the part of Deanna on “The Walking Dead” last fall, showrunner Scott Gimple had to track you down in Galapagos.

It was very hard for them to find me. I was on an expedition ship and was incommunicado. But of course, my beloved husband, the communications genius, figured out how to connect me with Scott and we had this long discussion about “The Walking Dead,” whether he wanted me to do the job and whether I felt the job was appropriate. I said to him, “I’ve never seen your show, but I’ve done my Google research and I hear it’s the cat’s meow. It is my pleasure and honor to work for you, but you cannot waste my time. I don’t have as much time as people in their 20s and 30s. If you feel this part is significant, then please, use me. But if it’s not, I beg you, give another actress an opportunity to be part of your family. You can have my ability, but you cannot waste my time.”

When I auditioned, I didn’t know it was for “The Walking Dead.” I read a scene and played a character that didn’t even belong to the series. So I’d never seen a script. I had no proof, nothing. But I accepted the offer. I’m a lawyer’s wife and daughter – my father was a litigator, my husband is a negotiator, my uncle was a judge – and they would have said I was out of my mind. But I’m an artist.

Deanna is a perfect character for you. She’s articulate, self-possessed and always analyzing situations. And from the look of the photos you’ve been posting on your Facebook and Twitter accounts, you seemed to have a blast.

It’s an amazing role. I said to my agent two years ago, “I would like a lead in a very successful series, and age has to be irrelevant. I don’t want to hear any mythology about youth, about no wrinkles, about older people, this is not useful to us. We are not going to deal with chronological time; we are going to deal with the simple vision of getting a lead in a very successful series. And this is how we’re going to do it, I’m going to keep auditioning until I get a yes.” And that’s exactly what happened. Is that crazy?

And now that we know Deanna has survived the finale, does that mean you’ll be back?

To my knowledge, you’ll be stuck with me next season! It’s one of the greatest jobs I’ve ever had in my career. I love, love, love it. I live for the day when”The Walking Dead” gets its due at the Emmys.

You mustn’t assume because there are walkers [a.k.a. zombies] that this is just a horror show. Quite the contrary, it’s a post-apocalyptic look at what it could mean to survive on this planet if evil becomes a full-out reckoning force that overwhelms good. It’s a metaphor. Why does “The Walking Dead” have such great appeal? Because somewhere in the writing it dips down into the river of common human experience, fear of death, fear of being overcome by evil, the fear that goodness will not out in the end. The walkers are terribly important because they create the circumstance of war. They are D-Day, they are the Nazis, they are ISIS, they are the enemy. The reason I’m keeping so fit is, I hope I will be on the show for a long time. I’m a good runner. I can make it out beyond those walls. 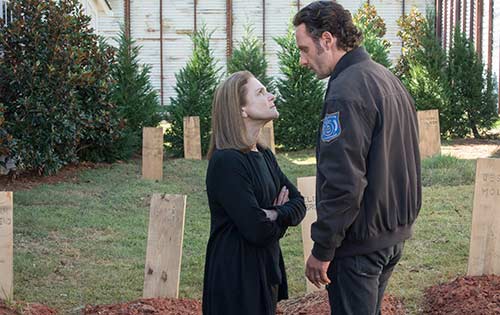 In your recent solo cabaret show, “Aging is Optional,” you talked a lot about your unique philosophy of defying age. Can you share a little bit of it?

It came from the very personal experience I have of my own life and, more importantly, of my mother’s. She lived to over age 103 without any Alzheimer’s or disease, and died very elegantly of a cerebral hemorrhage last year, just basically went to sleep.

In the show, I talk about getting rid of linear time and dealing with quantum time, how to make leaps in time mentally to places when you were younger. So therefore, playing Peter Pan in my 30s, which I did, was a very good idea. I’d like to play Peter Pan now!

What I recently did that was closest to that was performing on the trapeze in [the circus-themed Broadway revival of] “Pippin.” My character [Berthe, the grandmother] sings, “It’s time to start livin’, time to take a little from this world we’re given; time to take time, ’cause spring will turn to fall; in just no time at all.” So I’m not accepting fall. I’m not dealing with the linear idea of fall. I’m just hopping all over the place from one time zone to another, and I go to the ones that feel young, supple and funny.

When my mother was 100, I remember telling her, “Mommy, I’m sorry to tell you this, but this person’s dead.” And she said, “Well, she’s dead! OK, what are we having for lunch?” I’ll never forget it. She just let death go boop, off her back. Sometimes she’d say, “Tovah, I’m tired. I want to die.” And I’d say, “You can’t die. You have a wedding and a high tea at the Plaza.” And she’d say, “Wait a minute, let me get my book.” So that’s what I learned from my mother.

We always end by asking what aging with attitude means to you. But frankly, you seem to be the embodiment of that sentiment!

It’s a marvelous motto. Clearly Senior Planet and I share the concept of the full-life movement. I loved climbing Kilimanjaro because it taught me how to live in the present, how to appreciate small victories. How not to look at the goal, but to look at your feet and just put one foot in front of the other and keep going. 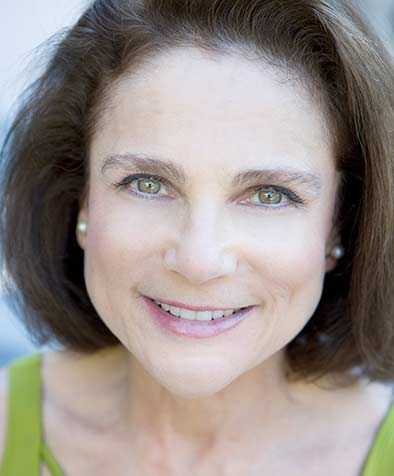