When artist Wendy Brackman (pictured below right) spotted hundreds of silk ties in a thrift shop in Upstate New York, the vibrant colors inspired her to start a sewing guild, teaching others the ancient art of quilting. Now the 12 (mostly) older women, who call themselves the Catskilled Crafters, have created a unique quilting project that evolved into “The Ties that Bind,” an art/memoir piece about fatherhood that is headed for a museum show this October in Baltimore.

Brackman, 63, taught herself quilting because she found it relaxing. “I found a group of church ladies who helped me,” she says. “The one thing quilters do is share. If ever I had a problem, they would offer to come over. These girls, in their 80s, were a sisterhood, they sewed, they talked and they stayed active.”

She used old bathing suits for her first solo sewing project but as soon as she spotted the silk ties at the Pine Hill Community Center’s thrift store, she posted flyers on the center’s website and noticeboard inviting would-be quilters to join her. The women met every other week at Brackman’s home studio, using a ping-pong table as a work station.  “It started organically,” Brackman says. “I chose something that was simple to do. You don’t need a sewing machine, just needles and thread.  I find curiosity grows so quickly because it is so engaging and rewarding. And as we all got to know each other, we talked about families and our tie-wearing fathers.”

During the long snowy winter in New York’s Catskill Mountains the “Ties That Bind” project took on a life of its own. As friendships formed and new skills learned, the women’s group added Ernest Hemingway-style six-word “memoirs” to the work.

Gail Lennstrom, 72, chose a variety of reds to create “Sometimes Dad made me see red.” One tie appeared to be smeared in makeup, so she added the words “Dad had lipstick on his collar.” 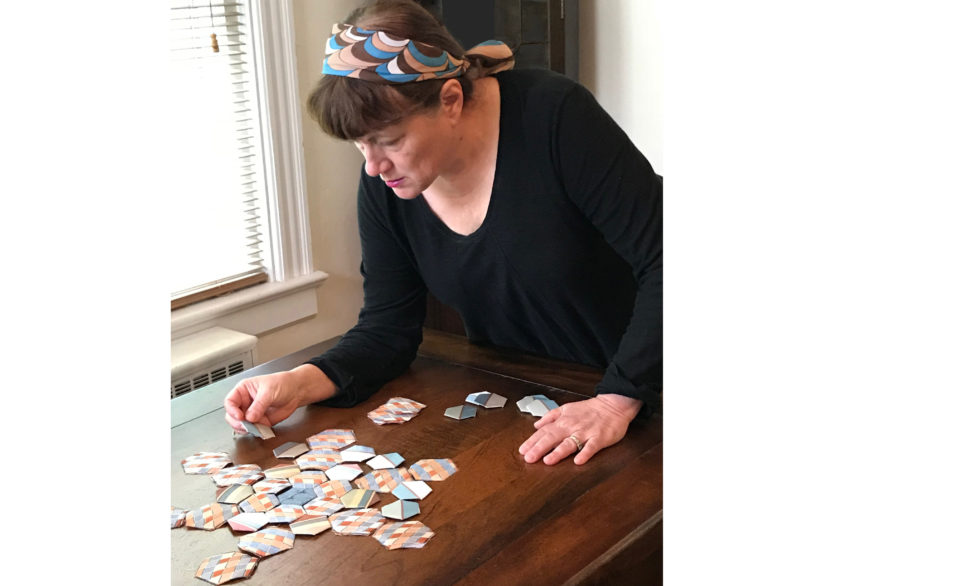 For Gail Freund (pictured left), 61, the faint smell of her late father’s cologne on one of his old ties bought childhood memories flooding back. She also used a tie belonging to one of his best friends, combining the two to make “Star buddies together in Heaven.”

As the project gathered steam, the women put out donation bins around the Pine Hill area to collect extra ties and appealed to friends and family to clear out their closets.  Each neckpiece was dismantled, then carefully washed and ironed before the women stitched together kaleidoscope “story sculptures.”

Now their work is set to be seen by a far wider audience at Baltimore’s American Visionary Museum. The 11-month “Parenting: An Art Without A Manual” show, which opens in October, has an entire room devoted to fathers, including the Catskilled Crafters pieces.

They are also planning a viewing nearer to home in the summer and discussing future projects, using not only their new sewing abilities but bonus skills they learned around the way.

For jewelry designer Freund the project embraced her work expertise with her long ago love of costume making. She also became the group’s official photographer, learning camera and computer skills that she had previously shied away from.  Freund also designed the Catskilled Crafters logo.

“It was a healing project,” she says. “After my dad died in 2015, I lost my job, we sold our apartment and moved to the Catskills full-time. It was such a change, I was mourning my old life, so this project was sheer joy and helped me make new friends.”

Among the new friends was Gail Lennstrom.  The retired physical therapist, who writes plays for a local theater and hosts her own radio station, is a strong believer in ageing with attitude and is always on the look out for new ventures.  “You have to find things that stretch you,” she says.

“The radio show is very technical with all the microphones and equipment, it’s like piloting a 747.”

Brackman, who has exhibited at the Baltimore museum twice before, is known as Wacky Wendy the madcap milliner because she makes elaborate hats from paper plates.  The project brought back powerful memories of her own father.

“My dad was a bit of a dandy. He shaved every day, he looked good, he put himself together very much in the way the British do it with his collar and wide ties,” she recalls.  “I also remembered drawing my grandfather at the dinner table when I was 16. It was a simple line drawing and when I showed him, he started drawing a pattern on the tie. My father leaned over, grabbed the drawing and told him he had no right to do that to my work. It infuriated my father. I saw a relationship between them I had never seen before. It also validated his opinion of me as an artist.”

After a long and successful career, Brackman says she is definitely aging with attitude, adding: “I am more relaxed now. I don’t have to prove myself anymore. It’s a freedom that only age can give you.”

For more information on the “Ties That Bind” exhibition go to: https://seniorplanet.org//www.avam.org/exhibitions/parenting-an-art-without-a-manual.shtml

One response to “The Ties that Bind”