“When did we start agreeing that growing to be an elder is shameful? That our bodies become “disgusting”? When did we become obsessed with the idea that as an elder one should strive to be younger, to be anything but… an elder… When did we forget that these bodies are not for others but are our own divine creation to manifest the dreams of our hearts?” —Jade Beall, Instagram

Photographer Jade Beall’s mission is simple: She wants to show us our beauty—women of all sizes, shapes and ages—and she wants everyone around us to see it, too, even in the face of the wrinkle-free, svelte image of female beauty that we are continuously exposed to.

“As a photographer, all I saw was the perfect body, and everything else was considered offensive,” she says.

Beall is best known for her photographs of pregnant and breastfeeding mothers. The photos have been widely shared on social media, and in 2014 she gathered them into a book, “The Bodies of Mothers: A Beautiful Body Project,” which earned her global attention. Now Beall is working on a series of equally truthful photographs, “Beautiful Bodies of Elders.” Like her “mother” photographs, she posts these images to Instagram along with her subjects’ stories and, occasionally, her furious take on how we define “beauty.”

A photo posted by Jade Beall Photograpy (@jadebeallphotography) on Dec 9, 2016 at 1:08pm PST

As Beall says, showing pictures of older bodies is revolutionary—especially the bodies of older women who are naked and proud. “Photographing elder men is more acceptable—leathery is OK,” she says. “But women are expected to be photoshopped to look like they really aren’t old.”

Beall chatted with us by phone from Tucson, Arizona, where she lives and works.

How did you get interested in photographing elder bodies?

My passion for elders happened organically as a result of my project photographing pregnant women. The mothers of the women I photographed told me they felt unseen. I grew up in Mexico, I love Africa and I photographed the demonstrations at Standing Rock. I’m aware that there’s a tradition of honoring elders in other cultures. I liked that. I see elders as a source of wisdom, and I think it’s shameful and offensive that their bodies are not appreciated. I love celebrating humans who are not celebrated. The single body type is so boring—the diversity of bodies is so much more interesting. When we put them together, we have rainbow of gorgeous bodies.

I’m infatuated with aging skin, with wrinkles around the eyes. They’re so much more interesting than smooth skin. I see my photos as a way for young people to see growing older as a privilege. My dad just died at 65, so making it to your 70s and 80s is a great achievement for me. The fact that we don’t celebrate it is a travesty.

It’s a divine privilege to be an elder in these incredible bodies, but it’s really hard when for 70 years you’ve been told you should be 20. It’s hard to see the beauty. 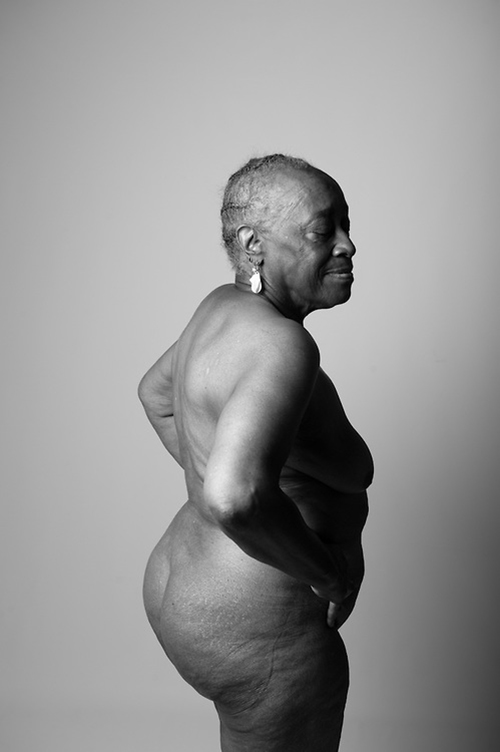 Was it hard to find older people who were willing to pose?

I had friends here in Tucson who are in their 70s and I asked if I could photograph them. They’re an interracial older couple who are very much in love. They came over and had a blast doing the photo shoot. She walks with a cane, and it was one of the most special shoots I’ve ever done. When I posted the photos, people went crazy despite the fact that we’ve been trained to find older bodies gross. The vast majority of comments were supportive—people found the photos inspirational, because these people look in love and proud. That photo has been seen by 5 million people. After I posted it, other elders started reaching out to be photographed.

Gerry, 75, and Darwin, 70, beloveds for over 20 years. I refuse to accept the wide spread (mostly western) human belief system in regards to what is beautiful, especially when it comes to the sacred vessel we call our bodies. Why do we accept to believe that one thing must be more beautiful than another? Why cannot we embrace a million-billion definitions of beautiful? The divine: skin that drapes, stretches, sags, wrinkles, burns and rebuilds like spiraling Fibonacci across our fragile and strong bones made from the same stuff as the stars all combining to create this phenomenon that comes to life for a short amount of times that we call… bodies. Many from my human tribe and other humans who wish to sell me things “that will hide the evidence that I am growing older” tell me that as I grow older, I am worth less and less and that elder bodies are anything but beautiful. These elder bodies: the temples to decades of wisdom, heartbreak, strength, failure, triumph, THRIVING. How, I wonder, could they be anything but beautiful? I am starting a new series on beloveds over 60 because I wish to be free from the imposed beliefs. Gerry: I love my body. I use a cane, i am having vision problems and my breasts reach to my waist, but you know what? I like me! Darwin: I still have body issues. I would love to loose some weight. *censored for IG

Have there been any surprises for you as you’ve photographed older bodies?

Weirdly, I’ve discovered that people don’t want their hands in the shot. They think elder hands are offensive. How can hands be offensive?

You made a book of your pictures of pregnant and nursing women. Are you planning to do the same with this project?

I hope so. So far I only have photos of about 10 elders. I’d like hundreds—a huge collection of elder bodies photographed as their actual age. I want massive diversity. Once I figure out the funding, I look forward to traveling and doing portraits and turning them into a book. I’d love for my son to see those bodies. He’s five and already surrounded by breastfeeding photos. I want him to say. “Oh yeah, this is normal, these are beautiful bodies as they grow older.” 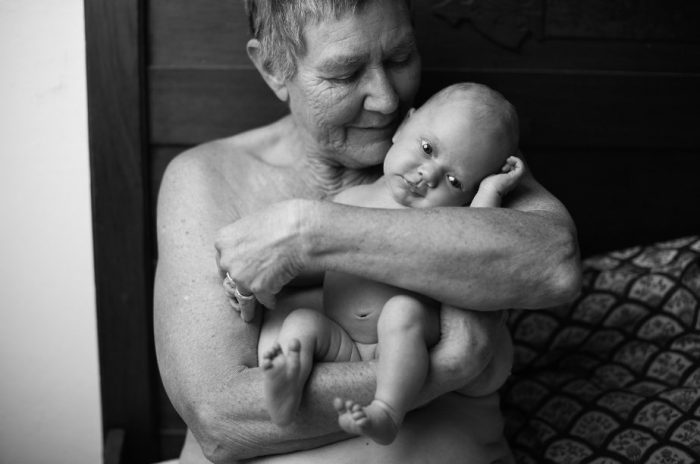 How do you feel about your own body?

I’m pretty normal looking in a curvaceous way. I’ve changed since I gave birth. I gained 50 pounds, but my body fluctuates. Most of our bodies fluctuate. Our bodies are like the ocean, and it’s OK.

4 responses to “The Beauty of Older Bodies”