By Raven Snook Wednesday, August 31 No Comments Share This:

“There are thousands of acres all over the world of unexploded ordnances… It’s a great metaphor for the unexploded potential in older people, things that are unexpressed, unexplored.”

One rule of the residency: No digging.

“They explained that we couldn’t dig because of ‘unexploded ordnances’: cannonballs and other explosives still buried on the island,” Weaver remembers. “Well, you know how artists are, we go digging all over the place! We did some research and discovered that there are thousands of acres all over the world of unexploded ordnances, and we became fascinated. It’s a great metaphor for the unexploded potential in older people, things that are unexpressed, unexplored.”

The Buried Potential of Elders 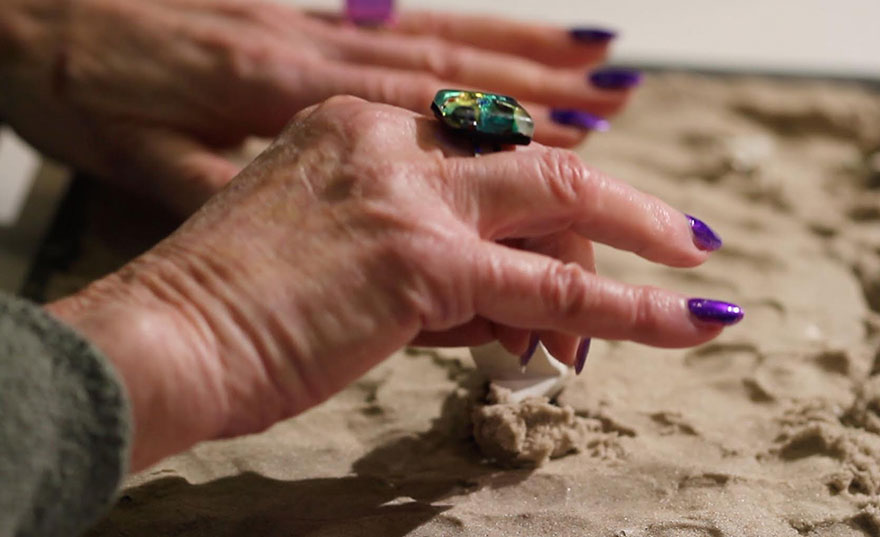 Buried potential became both the inspiration for and the focus of Weaver and Shaw’s latest endeavor, “Unexploded Ordnances (UXO),” a series of exploratory workshops with seniors that will provide material for a theatrical production. The term “buried,” Weaver says, refers more to “the fantasy of life as opposed to the lost opportunities of life.” It’s a subtle but important distinction: what you always wanted to do rather than what you didn’t do.

As Weaver says in a video about the project, “I want to find out what happens when we dig down in there and locate that hidden potential and let it go.”

Both Weaver and Shaw —  co-founders in 1980, with Deb Margolin, of the feminist performance group Split Britches — have previously explored age in their work. Shaw wrote and performed a solo  show, “Ruff,” about age and loss after suffering a stroke. Weaver has a rich history of creating cutting-edge art in collaboration with other seniors. Her 2014 La MaMa show “What Tammy Needs to Know about Getting Old and Having Sex” costarred members of the Sirovich Senior Center in Manhattan’s East Village. This past spring, a few of those seniors accompanied Shaw and Weaver to London’s Barbican Centre to help develop “Unexploded Ordnances” alongside their British peers.

“One of the things we did was just talk about this concept of Unexploded Ordnances and what kind of images came up for people. We asked if there was something they had always wanted to do but didn’t get a chance to,” Weaver says. “We also did some literal digging.” Weaver brought in some tiny objects, including dollhouse furniture, and buried them in sand. As the participants pulled out objects, they would talk about the ideas that the items sparked in them.

“Then we wrote wishes and dreams and hopes on slips of paper and buried those, too,” Weaver says. “People dug them out and responded to them even though they weren’t theirs. What if I had always wanted to be an opera singer? What would I have done?”

As things progressed, Stanley Kubrick’s classic 1964 Cold War satire “Dr. Strangelove or: How I Learned to Stop Worrying and Love the Bomb“ became a major influence. “We just fell in love with the doomsday aspect of that film and the humorous way it dealt with impending disaster,” Weaver says.

“In the workshop, we talked about our sense of doom. If there is an impending disaster right now, what is it? Trump was a big one, but so was climate change. How do we think about our own life potential when we think the planet might be dying? We talked about how we might amass all of our different little potentials in order to make a big change.”

Shaw found the entire experience liberating. “It was so refreshing that they weren’t being interrupted and they had great ideas; so great to see all of us elders have the floor and not just be talking about what they want us to talk about, which is what it feels like being old.”

Throughout September, Weaver and Shaw are inviting NYC seniors to join them for a series of drop-in workshops or “open houses” on Governors Island to discuss unrealized dreams, talents and hopes. In October, the duo will mount a show at legendary downtown culture hub La MaMa based on this research.

The London sessions culminated in an informal show-and-tell for Barbican staff, not a full fledged production. Weaver says that the October world premiere at La MaMa will still be a work in progress.

The open houses will determine what, exactly, the show will be (although the duo may invite an elder or two onstage with them, they are the stars). “We encourage as much material gathering as possible but we don’t use anything without permission,” says Weaver. “The conversations will help us develop the piece, which we hope will have an element of public discussion.”

The Governor’s Island open houses will be flexible and responsive to who’s in the room, ranging from more formal discussions if a crowd of seniors shows up, to creative activities and conversations when there are just a couple of participants.

“I want to make it as productive and comfortable as possible, so people can think and be creative,” Weaver says. “Elders are an unexplored resource.”

Governors Island Open Houses are September 5–25. People ages 50 and up can join Weaver and Shaw in Building 20B Thursday–Saturday 1–5pm and Sunday 3–5pm. No registration required, just drop in. Click here for more info and directions.

Open Thread: Back to Normal Yet? Feel safe?

Are you getting whiplash yet?
Book Club