“Do you “Tweet?” Just five years ago, that question might have been met with a vacant stare, but today it’s a bonafide call to action. Whether you understand Twitter or not, you should know that it’s fast becoming the modern-day equivalent of a newspaper—with more up-to-date information. During last year’s Hurricane Sandy, news of the electrical transformer explosion that cut power to downtown Manhattan was being tweeted hours before a major news source reported it. In the aftermath, some New Yorkers were still getting their news from Twitter. 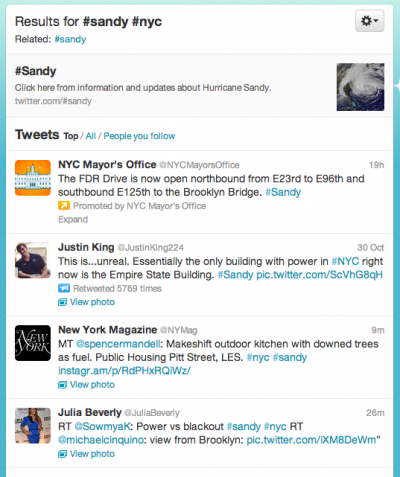 So if being up to date and aware still matters, then Twitter matters, too – a lot.

Launched in July 2006, Twitter is an online social networking tool that lets users send their followers text-based messages of up to 140 characters. These messages are famously referred to as “tweets.” With over 500 million users sending more than 340 million tweets per day, the impact of the site is tremendous. But most folks already have email -plus instant messaging and Facebook. So what exactly is it that Twitter does so well?

Here’s the scoop. Email is person-to-person, and unless you send to a group (organized by you), one person gets your message. It’s personal communication. Facebook is broader. There, posts can go out to an entire network of “friends,” but generally no further. If you’ve “liked” Senior Planet, you’ll get our posts too – but it’s still about “friends.” Tweeting is like grabbing a megaphone and shouting across a crowded subway platform. Everyone in the world (at least, everyone who’s on Twitter) can “hear” what you said. That’s why Twitter is actually the fastest way to spread information. And the fastest way to receive it.

With Twitter, your new friends (or “follows”) don’t even have to be actual “friends,” but can be a mix that you choose to suit your interests – just find their handles (@seniorplanet) and click Follow. You could be a monk in Bali and be connected on a moment-to-moment basis with your sister @Sally, @Vladimir Putin, @Salman Rushdie and your favorite @HuffPo blogger.

On Twitter, all kinds of information is available – right now. Some politician does something stupid, and it’s shared far and wide, usually through Twitter’s discussion-organization method known as a hashtag (eg. #stupidpolitico). In fact, if you’re looking for a topic discussion on Twitter, try the hashtag.  (Note: Enter #senior and you’ll get a stream of high-school senior chat; try #seniorcitizen.)

This kind of rapid information flow is what old media always strived to do while fighting the time-consuming realities of actual copywriting, printing and distribution. Thanks to Twitter’s no-frills, message-centric simplicity, all manner of news and information moves at warp speed. It’s a worldwide news feed for all – without any third-party filters. Read the tweets and judge for yourself how trustworthy it is.

When world events are trackable in nanoseconds, from the Occupy movement (#occupy) to the Middle East’s Arab spring (#jan25; that feed’s still going), traditional ways of communication just don’t cut it anymore. People don’t wait for the six o’clock news. They want to know now – and nothing is more now than Twitter.

From what’s going on in South Sudan today (#Sudan)

to the latest on #Medicare, Twitter covers all the bases when it comes to the world at large. Is it hard to wade through such a feeding frenzy of information? Absolutely, but once you’ve decided who to watch and what topics to follow, Twitter lays the world bare like no other social media site. Get ready, for it’s now officially a Twitter-world and we are merely living in it. Next time there’s a revolution somewhere in the world, you can get a blow-by-blow report. See also How to Use Twitter as Your News Source

3 responses to “So What Is the Point of Twitter, Anyway?”