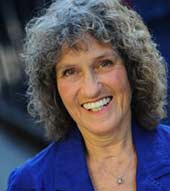 Welcome to our new Sex at Our Age columnist, award-winning senior sexpert Joan Price! Every week during Senior Sex Month and then monthly, Joan will answer your questions about everything from loss of desire to solo sex and partner issues. Nothing is out of bounds!  (Read our Q&A with Joan here.)

I’m a 62-year old woman and I am madly in love, or infatuated or whatever, with a 55-year-old man whose wife left him a few years ago. He’s the first man I’ve been attracted to since my husband’s death five years ago. He is shy and introverted, but I get signals from him that he’s interested in me. Still, I find myself holding back from full flirt mode, and not just because I’m shy. I fear that if he finds out I’m seven years older than he is, he’ll be totally turned off.

First, forget the idea that a seven-year age difference matters – whichever gender is older. It mattered when we were in our 20s, but the difference between 55 and 62 is trivial if the two people are attracted to each other.

Age aside, I think you may really be holding back from full flirt mode because you’re afraid to risk your heart again. What if you go for it and he’s not interested – can you handle that? But on the other hand, what if you wait for him to make the first move and he doesn’t, only because his shyness or fear of rejection is stopping him – then you’ll never know.

If you’re feeling too shy to blurt out an explicit invitation, here are some ways to start letting someone know that you’re sexually interested:

Sometimes directness works best – if you can do it. After nine months of sending out subtle and not-so-subtle signals to Robert, the man who attracted me in my dance class, I propositioned him by email, saying, “I’m powerfully attracted to you, and I can’t help wondering what it would be like to dance with you – without footwork.” We fell in love and had seven beautiful years together until I lost him to cancer. If I had not finally been direct, he never would have made the first move himself, and I would have lost that seven-year dance. If you feel up to be being more bold and won’t feel devastated if he says no, you could try just blurting it out.

After your loss and years of grieving, you’re starting to feel your life force come back. Whether you’re “in love” or “infatuated” (you’re probably infatuated; you don’t know him well enough to be in love), your sexual and emotional energy are part of that life force.

Enjoy this reawakening, nurture it, and even if he doesn’t end up being the man who shares your bed, celebrate your renewed feelings of sexual desire.

To send Joan your questions, email sexpert@seniorplanet.org.
Joan Price is the author of the award-winning self-help book “Naked at Our Age: Talking Out Loud about Senior Sex” and of “Better Than I Ever Expected: Straight Talk about Sex After Sixty.” Visit Joan’s  blog, “Naked at Our Age.”

6 responses to “Sexual Healing: Getting Back Into Dating After a Loss”