“The reality is that those who live longer are increasingly seeking work, not only to generate income but for a sense of purpose and fulfillment. Many people don’t want to simply retire and garden for 30 years. They’re looking for more.”

Seniors, rise up and teach the world to “wise up!”

Wise Up is the name of a campaign idea that involves older people flash-mobbing retail shops, marching on ageist organizations and using the activist tactics of their younger selves to “radically change the narrative on what it means to be older,” the campaign manifesto says.

The campaign is part of the Age of No Retirement, an anti-ageism platform founded in the United Kingdom to raise the visibility of seniors as vibrant, able members of the workforce and community at large and ultimately,to create an age-neutral society.

The Age of No Retirement, or ANOR, began after its founder, Jonathan Collie, M.D., tried to implement what he describes as a “skills dating” initiative to connect seniors with flexible, paid work. He soon realized that his project was doomed to failure. Employers weren’t going to hire seniors, because there’s such a strong age stereotype in the workplace — an image of  “an old person with crumbly glasses, a tech illiterate who doesn’t learn new stuff.”

“It was clear we need a comprehensive approach to making changes in how seniors are viewed,” Collie says.

As he dug deeper, he found that not only employers hold ageist views.

“Even older people view themselves through the same stereotypical lens as the rest of society,” Collie said. Older people he spoke with assumed that retirement was what they were supposed to do — “until they hear that they have roughly 10 years more of healthy life expectancy than their grandparents did, and I ask what they intend to do with their extra decade.”

Collie noted an interesting disconnect between those attitudes and the reality of senior life today. “The reality is that those who live longer are increasingly seeking work, not only to generate income, but for a sense of purpose and fulfillment,” he says. “Many people don’t want to simply retire and garden for 30 years. They’re looking for more.”

Seniors in the Workplace: Changing the Narrative

Collie says that by changing the conversation on aging to one that better fits today’s reality, he hopes to create an age-neutral, multigenerational society across the globe. He’s engaging with everyone — from large corporations to individuals — to help develop prototype programs designed to smash age barriers: to define “retirement” and “seniors” differently and to give older people a voice in new-product development.

“There’s no way any huge organization can ignore the fact that the modern 50-, 60-, 70-, and even 80-year old is healthier, more productive and has more cash than ever before,” he says. “Ageist stereotypes just don’t reflect reality.”

To get new and radical ideas on the table, Collie and an associate put together a design-led two-day hackathon in a bare-bones industrial space in London. The instructions: “Don’t get bogged down in the past. Avoid focusing on the usual issues — loneliness, dementia, home care. Look at the 55- to 75-year-old age bracket. What could society look like if we valued that demographic?”

With these instructions in mind, the participants brainstormed some 27 topics across nine themes. The radical “Wise Up” prototype program was one outcome. 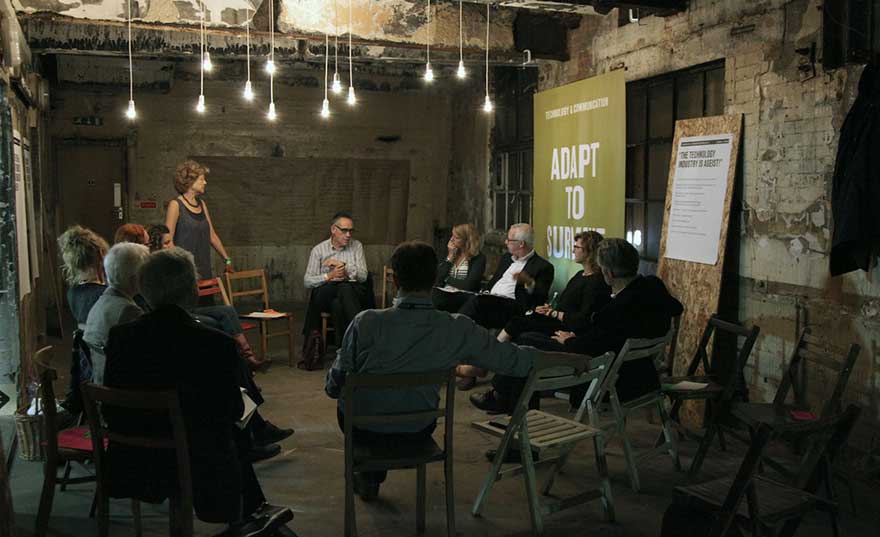 Prototypes for Projects to Tackle Ageism

More than 1,000 individuals — half or more were seniors — and 300 corporations came up with a slew of provocative prototype programs. Some of the prototypes are more practical than others, but they all target ageism in the workplace and outside of it, a few of them through actions that might attract media attention.

It’s one thing to come up with great ideas. It’s another to make them happen. Because the end goal of the prototypes is to affect real change, each has a clear action plan that describes the specific steps needed to make it happen, where funding might come from and what success looks like.

Making the ideas implementable would take business involvement. Collie pulled together 23 big-brand organizations for a corporate-only event. Its purpose was to identify ways that longer healthy life expectancies could benefit them. The large financial institution Barclays was the Age of No Retirement’s first core partner. It plans to test some of the prototype programs, giving them their first run in a real corporate setting.

Since Barclays has come on board, other funding opportunities have started to open up.

Collie now intends to crowdsource, allowing anyone anywhere in the world to provide input online and vote on the rudimentary prototypes. Once clear leaders among the prototypes have been established, the organization’s corporate partners will translate some of them to action.

“In effect, everyone who provides input will be co-creating the programs,” Collie says.

Collie emphasizes that if organizations adopt a multigenerational view from the top down, starting with senior management, society will reap the rewards much sooner. Co-creation and inclusive program design principles make the programs more actionable, he said. Seniors are playing a critical role in the prototyping.

Once some of the prototypes are up and running, Collie says that storytelling will be a big part of the program.

“We want to change the narrative around age from one of old age, dependence and decline to one that reflects the value that comes with age and from a multigenerational society,” he says.

Isolated interest has come from the United States and other European Union countries, but Collie plans to test and refine the concepts and programs in the UK first before taking them global. Stay tuned!

Read more about the Age of No Retirement