By Caitlin O'Toole Friday, September 14, 2018 No Comments Share This:

It’s mid-afternoon in the computer lab at the Queensbridge Riis Senior Center in Queens, one of the five boroughs of New York City. Ms. Ann, a 69-year-old woman with a beautiful smile, is at one of the computers, completely immersed in her work. It’s hard to believe that just two years ago — during a fierce battle with depression and other health issues — she was ready to give up. Now, she has plenty to look forward to. 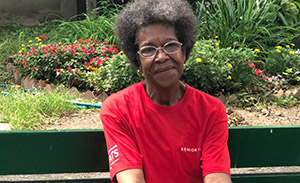 “I can do anything I want now,” she says. “I want to go back to school! I’m going to get my bachelor’s degree.” Thanks to Ms. Ann’s perseverance, drive, and enthusiasm — and some inspiration and free technology classes from Senior Planet — that’s exactly what she’s doing.

The City of New York helped, too. Its $10 million investment is helping to secure broadband service to over 21,000 public housing residents, who often struggle to make ends meet.  The City enlisted New York City-based non-profit Older Adults Technology Services (OATS) to deliver its award-winning Senior Planet technology program to older residents of five New York City Housing Authority (NYCHA) housing developments and help with utilization of the broadband service. Classes are now offered at the Queensbridge Houses – the largest public housing development in North America and the site of the Queensbridge Riis Senior Center – and other NYCHA public housing developments throughout the boroughs.

Ms. Ann, who was a computer novice, signed up for Computer Basics, one of the most popular courses — which will be offered again at some sites in October along with ACTivate, Connecting in the Digital Age and Money Matters. Some classes will be offered in Spanish.

“They sat me down and showed me what to do,” says Ms. Ann, who’s lived in the Queensbridge Houses for 53 years. “They don’t want to hear that you can’t do it. I did my first research assignment on my phone! I never thought I’d be able to do that. I give myself all the credit. In the two years I’ve been in these classes I’ve totally turned my life around.”

Ms. Ann is a huge fan of the Money Matters class — which OATS created with support from Citi Community Development to help communities tackle financial insecurity. (Ms. Ann is so motivated that she took Computer Basics at the same time.)

Tony, a 67-year-old Vietnam veteran, also took Money Matters at the Jefferson Senior Center in Manhattan and says it had a huge impact on his life.  Tony has an amputated leg, was living in a six-story walk-up, and had to climb 142 steps to his apartment. As a result of his military duty, he suffers from heart disease, post-traumatic stress disorder, chronic obstructive pulmonary disease and severe fatigue. After he took Money Matters, he learned how to bank online and send emails and got a grant for a coop apartment. Soon, he’ll be moving out of his walk-up. 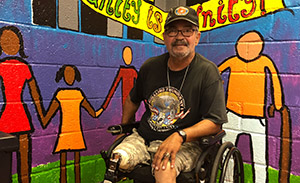 “I have better control over my finances now so I’m in a better position to take control of my situation,” he says. “The electronic age is here whether or not we like it. Getting involved is going to benefit us. Disabled people can learn a lot of things to make their lives easier. I see ‘aging with attitude’ as enabling me to get ahead.”

“We were so thrilled when we started this project in Queensbridge Houses,” says OATS Founder and Executive Director Tom Kamber, “because so many of the older residents expressed interest in empowering themselves through financial education and also helping out others in the community.  Successful participants like Tony and Ms. Ann are a testament to what’s possible when we believe in the potential of older adults, and we’ve been especially fortunate to have strong support from Citi Community Foundation and Mayor De Blasio during this entire effort.”

When it comes to teaching students about the electronic age, trainer Roberto Enamorado says his approach is always the same: be patient. The needs of the students, however, can vary from community to community.

“There are cultural nuances with each different community, such as a lower-income one,” Roberto says. “There are people who might not know how to read, or have had multiple hand surgeries, or have had nerve damage, or a stroke, or mental illness. Manhattan’s Chelsea location will be very different from Queensbridge, or, say, if we take Senior Planet to Vermont or even China. There are also cultural nuances with language — if you’re teaching class in English, Spanish, Russian, Mandarin, or sign language — that requires different tools and understanding.”

The goal, however, is often the same: self-empowerment. Fiona Adams, Project Lead, points out that while Senior Planet may offer technology tools, education, and be an inspiring catalyst, the actual changes in students’ lives come from within.

“We have awakened them to the possibilities,” she says. “They want to do more. They become more active in the community. Some start thinking about getting part time jobs. We see some seniors getting more active in leadership roles at their centers. Before, some thought things would never change. And now, they can help create the change they didn’t think was possible.”

Senior Planet trainer Marcela Rodriguez says there are two such students from Red Hook, Brooklyn. “Juana Narvaez and Guadalupe Moreno are always thinking about their community and how they can help make it a better, safer place for everyone,” she says. “They help their peers in my Chrome Basics class, and Juana has reached out to her local council member to file a complaint that certain NYCHA apartments have had no gas for months. They make their voices heard.”

Tony also became more active in the community, traveling to Albany, N.Y., to lobby with other Senior Planet members for more training. Ms. Ann took part in a 20-week technology-driven advocacy program called ACTivate and also became more active within the Queensbridge community. When she walks down the halls, everyone seems to know her. She’s sweet. And funny. And seems to embody the “aging with an attitude” slogan on her Senior Planet t-shirt.

“I’m living, honey. With an attitude, baby,” she says. “Time is short. Do something with yourself. For yourself. For other people, but most of all, for you. Try to live well, live as honest as you possibly can, and if you tell a story, be honest. Don’t be ashamed. That’s what aging with attitude means to me. Every day.”

The Fall 2018 quarter will run from October 1 — December 7.  Click here for the map and schedule of the various locations where fall classes will be held (keep checking back — we will update for the Fall quarter soon!). Questions? Please call us at 646-590-0615.