Ellen Burstyn, 88, plays a widow who reluctantly moves into a retirement community in her new film, Queen Bees. Here she discovers it’s just like being back in high school, with cliques, flirting and mean girls.

Co-starring with Ann-Margret, 80, Jane Curtin, 73, Christopher Lloyd, 82, and Loretta Devine, 71, Burstyn’s Helen even takes a chance on love with James Caan, 81. After three marriages of her own, the Oscar-winning actress today enjoys a busy, independent life in New York, telling SENIOR PLANET she’s not quite ready for senior living:

Q: What drew you to this hilarious senior rom-com?

ELLEN: The film has four leading women, all living in a retirement home, all in our 70s or 80s. It’s very unusual for Hollywood to make a film about women my age and that excited me. These people have lived full lives with partners and children, but they can still fall in love again and have a wonderful time.

Q: Did Queen Bees change your attitude to retirement communities?

ELLEN: Yes, I always thought of them as places where you’re put out to pasture and your life is over and you’re just waiting for the end. But we shot in an actual retirement community which was so lively and beautiful with a wonderful swimming pool and lovely restaurant. There were lots of activities and a lot of love in the air; lots of second and even third romances are born all the time. It’s actually based on the writer’s own grandmother’s experience where she met her next husband.

Q: Did you know the cast going in?

ELLEN: I’d met Ann-Margret and Jimmy Caan before. It was a great group and we all had a good time together. Our director, Michael Lembeck set a fun tone which I think comes through. It’s a very high-spirited film which, after this dark time we’ve all been through, is very timely.

ELLEN: When I was young, I never pictured myself in my 80s and I certainly never pictured myself still making movies at that age, so it is a different time. I think we’re healthier now and living longer. The fact people aren’t smoking cigarettes has lengthened the life expectancy because so many people were either dying of lung cancer or heart attacks. So I think we’re healthier now than before. When I was young, I thought that 50 was old. 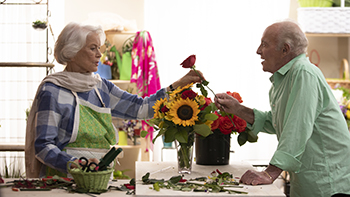 Q: Talk about falling in love with James Caan on screen?

ELLEN: We had very good chemistry (pictured at left).  We liked playing together and I think that shows on screen. We really enjoyed each other and it was easy to become this couple.

Q: Who is the best ballroom dancer between the two of you?

ELLEN: I am. Dancing is not one of James Caan’s virtues. He’s a very physical guy who’s done a lot of dangerous things like rodeo riding and motorcycling. He’s been hard on his body but dancing is not something he’s mastered so I had to actually teach him.

Q: And you plan to break into directing soon?

ELLEN: Yes, I plan to direct a film that was called Bathing Flo and now is called This Thing Called Life. It’s not going to happen just yet, if it does at all. It’s moved around from one producer to another and is still in its formative stage.

ELLEN: I’ve shot a film called Three Months which will be in film festivals come September.  The director and writer of Pieces of a Woman are also writing something for me…and then I have a play that I can’t talk about yet until it’s financed and booked in the theater!

Q: What’s your secret to aging with attitude?

ELLEN: By the time I got to 40, I had all the all alcohol I needed for the rest of my life – all the cigarettes, whiskey, wine and marijuana – so I started eliminating them so, finally, before I was out of my 40s, I was free of all that. I changed my diet and stopped eating red meat and got serious about exercising. I think all of that is responsible for the good health that I’m enjoying and still being able to work into my 80s. If you really take care of yourself, it pays off.

Want a peek of Queen Bees? Check out the trailer:

Queen Bees, as of June 11, will be in theaters + AVAILABLE FOR RENT ON THE FOLLOWING PLATFORMS: Amazon Prime Video, Apple TV, YouTube, Vudu, DirecTV, Spectrum, Xfinity and other digital platforms and pay TV operators.