“I am old, and things are different. When I leave the house, I have to make sure I go to the bathroom. And I make sure I don’t carry too much stuff. My costumes have become very lightweight.”

Rolando Vega has never given up making art. It has never earned him a living — in fact, he doesn’t have a gallery to sell his work. But as a street artist who wears a lot of his art, he doesn’t really need one. Since he was 18, Vega has been dressing up in homemade, over-the-top costumes and parading around the city. Now 62, he’s a mainstay at many annual NYC events and has earned a following of devoted fans who seek him out for pictures. Though he never wears the same getup twice, Vega is instantly recognizable for his one-of-a-kind style, a mash-up of Kabuki makeup, tribal elements and garbage glamor.

Workdays, Vega is a production supervisor for an environmental planning and engineering company. He’s been there for 30 years while raising two children, now grown, and pursuing his artistic passions: making analog and digital art as well as fashioning funky outfits, and even dancing and singing onstage at now-defunct places like Mars Bar and CBGB, where he earned the nickname Chickinman thanks to one particularly yellow ensemble.

Vega almost broke through years ago. When he was just 19, the Brooklyn Museum offered him a studio although he had no formal training, and he spent four years there making art. He was even profiled in The New York Times. But when a large grant fell through, his professional foray into the art world came to an abrupt end. He decided never again to rely on making a living as an artist.

These days, Vega shows no signs of slowing down. He is even contemplating ways to make his talents pay off monetarily. That is, if he can find someone else to do the promoting. He’s an artist, not a salesman.

We checked in with him by phone to ask about what it’s like being a street artist after all these years and how he sees his future. 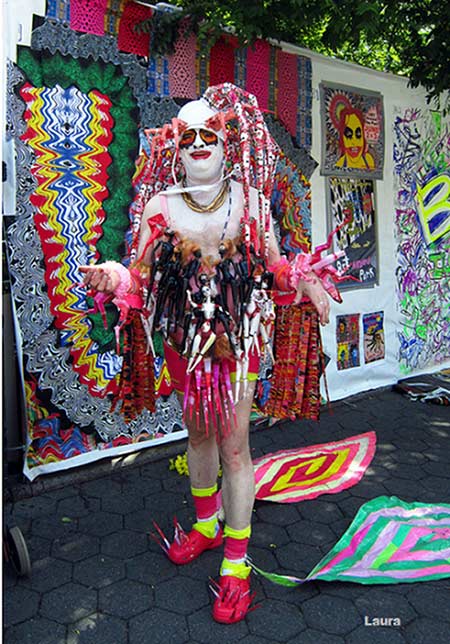 You’re approaching retirement age. Do you think you’ll ever stop dressing up?

Never, actually. I do it for the sheer joy of it, and I like the idea that I make so many people happy when they see me. If I could dress up every day, I would! I’m constantly making stuff, but if I make something and it’s not spectacular, it stays on the shelf until I think about how to turn it spectacular. I’ll be walking out the door and I’m still changing things.

How about retiring from your day job?

I think about it, but I’m not sure. I have access to a lot of equipment here, like printers and copiers and laminators. I even love my shredder. I have a whole series of wigs that I’ve made out of shredded paper. Plus, I love the company I work for. They’re very supportive of my work as an artist. They let me put up lots of my pieces at the office—it’s wall-to-wall.

Because of your heavy makeup and outrageous outfits, it’s impossible to figure out how old you are. I was floored when you told me you are 62. Do you get that reaction a lot?

Yes! I have a big fan base of people who have seen me for years, and many of them are really young. They don’t have a clue about my age and when they find out, they freak out and say, “You’re like an old man!” It surprises them. Makeup hides everything. I even paint my gray hair! There’s this book called Man as Art about the people of New Guinea, and they just take clay from the dirt and slap it on their faces, and it’s amazing. Very inspirational. I’m always out to create a look that no one has seen before. In doing that, you find that there is no age in it.

People are obsessed with age so much these days. I lived in Williamsburg for a while and you could tell they didn’t want me there. Everywhere I went, they were like, “What do you want, grandpa?” But when I dress up, everybody loves me—little kids, young adults, old people. This year at the Easter Parade, so many older folks pushed people out of the way to get a photo with me. As old people, we learn we have to be forceful. It was absolutely beautiful, so many old people coming by and insisting on posing with me.

Has aging changed the way you approach your art?

There’s a lot of shit about being old that sucks. People say you’re as old as you feel, but really, when you’re old, you feel it! I’ve been a partier all my life and I’m feeling the effects. I just did a show at this downtown gallery WhiteBox and I made this amazing thing, like a boat on a pole, but it had to be carried, and it gave me a backache. I wouldn’t have gotten a backache 20 years ago. I am old, and things are different. Like, if I leave the house, I have to make sure I go to the bathroom. And I make sure I don’t carry too much stuff. My costumes have become very lightweight.

Up until now, you’ve just done art for fun. Have you ever thought about getting paid for your work?

My kids and my fans are always telling me, “You have to start making money on this stuff. You can’t give it away for free!” But I don’t know how to sell myself. Sometimes people try to give me money. Once I went to Times Square, and three Elmos wanted to kick my ass because I was on their territory! I usually say I don’t take money, but sometimes people insist. The idea of selling any of my art is terrifying to me. I hate selling. The minute you get into the selling thing, it’s that world of, “Can you make a painting that’s yellow that matches my sofa?” No… but I’ll paint your sofa! It just bothers me. I’m not a promoter of myself at all. It’s a problem.

How are you aging with attitude?

I’m more prolific than ever. I say I’m an old prodigy because I’m coming up with new shit all the time. I sit down for a second and say, “Oh, I’m bored. I’ll make something!”

I have always made stuff. It’s always been a part of me since I was little. I just don’t know how not to. I never wanted to be a portrait painter or a landscape artist. As a street artist, I like the fact that I can do whatever I want. I’ve learned everything on my own, and I cherish what I know. I’m in an amazing place right now. I’m so sure of what I do, it’s part of me. 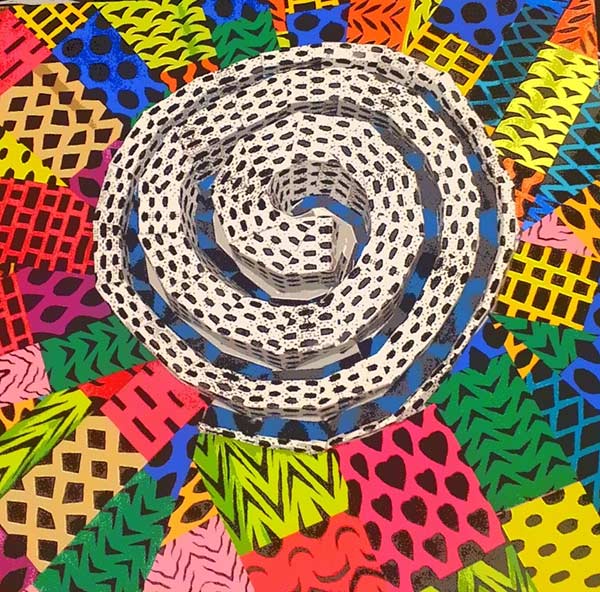 4 responses to “Street Art for the Joy of It”