If you’re a TV, radio, or movie buff, you may have heard of Gilda Mirós. The 80-year-old trailblazer has been an inspiring fixture in film and broadcasting for some 50 years. An award-winning veteran of Latin American broadcasting in the United States, she went to Vietnam as a presenter with the USO during the Vietnam War. She was also the first Hispanic radio personality to conduct a daily, four-hour live program in the US. She is featured in an exhibit at the Smithsonian’s National Museum of American History called Escuchame: The History of Spanish Language Broadcasting in the U.S.

Carmen Gilda — neé Gilda Mirós  — will be featured alongside other panelists at #RaisingHell: 50 Years of Activism – a panel discussion on December 11, 2018 at the Senior Planet Exploration Center in Chelsea.  The Puerto-Rican born performer will be speaking about the groundbreaking documentary she produced for the Manhattan Neighborhood Network (MNN) called “Seniors Finally Say #MeToo”. The documentary was shot with an iPhone and iPad, which Carmen Gilda had not touched before she was 77 years old.

“Activism is grounded in artistic expression and Carmen Gilda serves as an incredible example of the power of sharing your story,” says Isabel Magnus, Manager, Civic Engagement and Advocacy for OATS. “In committing to learn a new skill and by using that skill to participate in a movement, she’s a reminder that we are one choice away from beginning to create the change we believe to be necessary.”

Senior Planet spoke with Carmen Gilda recently in New York, where she is busy working on her new podcast.

SP: You got your start as a model. Yet, you say you were very insecure. That’s kind of fascinating.

CG: It’s interesting because I never felt attractive. I was a very insecure, shy, inhibited teenager. And all of a sudden, there I was. In one of the films I did, “La Vendedora de Amor,” I dance with a bikini! To me, my body was not beautiful, my movements were not good. I did it because I had to do it. Discipline, practice. Rehearsal. My mom said you can do it, try, you can do it.

SP: Tell us a bit about your mom. She had such an influence on you that you wrote a book about her. 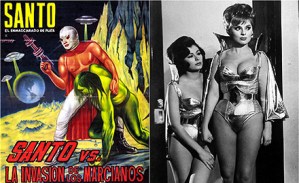 CG: My mom was everything to me, she is my inspiration. She helped me, she taught me about faith. Instead of going to college to do art, I said to her, “let me go to Mexico.” And she did. She went with me to Mexico City. She found a place where I could stay, and she paid in advance even though we didn’t have much money.  I was in 13 feature films there! It’s funny — you found a wrestling still from “Santo vs. La Invasion de los Marcianos”. That’s a B-film. I did two B-films about wrestlers.  I get emails from Mexico, Ecuador, Colombia, Argentina … people who remember my work. It is amazing! It is a cult — they are really fans!

SP: You went from being a TV, radio, and film star to being a full-time caregiver for your parents for fifteen years. Then, at 77, you sort of reinvented yourself and started producing. How’d you make that transition?

CG: I went to the Manhattan Neighborhood Network under a different name, just as an older woman who wanted to learn technology. I thought they’d think I was too old, but they didn’t. I felt comfortable. My son gave me an iPhone as a gift. I started to experiment. Then, learned how to edit with iMovie. I edit in my bed! And I’ve had my show, “Latin Icons: Past and Present,” for two years.

SP: How did “Seniors Finally Say #MeToo” come about?

CG: I had suffered from sexual harassment in the past but I had never talked about it. When the #metoo movement surfaced, the other seniors in the Actors’ Fund I am in started talking about their experiences in Hollywood and on Broadway. I said, why don’t we do a documentary on it? I rented the equipment, reserved a studio, used the iPhone, and used the iPad. One of the ladies co-wrote the script. It took three months to edit!

SP: The documentary is powerful, important, and gutsy.

CG: We’re making a statement with “Seniors Finally Say #MeToo”. We dare say what has happened to us, And this will help other people speak about it. Especially to me, as a Latina. Latinos have so many hang-ups because of our culture. We were raised to say, “No, no, a lady doesn’t say that, a señorita doesn’t say that — no, no.” Everything’s like, “Shhhh! Hush! Don’t let them know!” This cover-up is part of the culture. And we have to speak up so we can correct situations. So that we can deal with whatever has happened to us in life and be happy. And not feel guilty about it. That’s why I did this documentary.

SP: What’s next for you?

CG: I joined a committee to help older adults about bullying and about harassment and the aged. I want people to be able to say, “I need help, someone is mistreating me — can you help me?” It goes back to what I was saying about Latinos. Open your mouth! Ask for help! I’m carrying on “Seniors Finally Say #MeToo” to a clinic forum.

SP: What’s your advice to someone who wants to get involved with technology but is hesitant or afraid?

SP: You’re a perfect example that we never stop “becoming.”

SP: What does aging with attitude mean to you?

CG: My attitude is positive. I want to be able to say I have a statement before I go to the other world. I want to say good things, I want to present positive things. There’s no more ego in me. I’m over ego. Aging is a liberation.

If I have to leave tomorrow, I have my bag ready with good deeds. That’s all you take with you when you have your last voyage. You don’t take any more. You control nothing, you don’t know when you’re going to go. So that is my attitude. It’s a loving attitude, it’s a happy attitude. Because all we have is this little moment. And maybe someone listens to me and says, ‘I want to do this, I want to do that. I want to try! If I can’t do it, I can’t do it, but I tried.’ That’s it.

On December 11th, 2018, Carmen Gilda — neé Gilda Mirós — will take part in an interactive panel discussion and reception celebrating activism then and now called #RaisingHell: 50 Years of Activism. The event is hosted by OATS (Older Adults Technology Services) and will be held at their flagship Senior Planet Exploration Center at 127 W. 25th St.  from 4 – 7 pm. It will feature advocates discussing the intersections and parallels of social movements over the past 50 years, including the Civil Rights Movement, the #MeToo movement, and many others. To attend, RSVP required. To RSVP, email rsvp@seniorplanet.org, call 646-590-0615, or RSVP here on Eventbrite.

One response to “#RaisingHell: A Conversation With Carmen Gilda”