Until the lockdown imposed limitations, internist Dr. Melissa M. Freeman saw patients four mornings a week at Beth Israel Medical Center’s opioid clinic. In the afternoons, she received patients at her private office in Harlem, NY.  What’s so special about that?  The internist is 94-years-old!  What’s more, after practicing medicine for 65 years, Dr. Freeman still isn’t ready to retire. “I love helping people; medicine is a gratifying way to do it” she says. “As long as I can, I’ll continue.”
Born and raised in the Williamsbridge section of the Bronx, Dr. Freeman had a happy childhood surrounded by a loving, supportive family. Another joy: music. She began piano lessons as a child and was accepted at the High School of Music and Art; there she continued her musical education learned to play the bass – and met a world-famous conductor. Later, as a Hunter College student, she considered a career in social work, but it was her science classes that influenced her career choice.  When Covid-19 forced Dr. Freeman to limit her schedule, Senior Planet seized the opportunity to talk to her.
SP: You once played bass violin under the direction of the world-famous conductor Leopold Stokowski. How did that happen?
Dr. Freeman: Mr. Stokowski once visited the High School of Music and Art to listen to our orchestra. We were thrilled. What happened next was even more thrilling: Mr. Stokowski  picked someone from almost every section of our school orchestra to join his own artists in playing Bach’s St. Matthew Passion at the old Metropolitan Opera House. I was one of the students he picked.
SP: Did this experience cause you to think about a career in music?
Dr. Freeman: No. As much as l love music, I never wanted a career as a musician.
SP: What prompted your decision to study medicine?
Dr. Freeman: A family friend whose daughter was a physician urged me to consider it. I brushed off the suggestion again and again. But when I realized how much I relished my science courses, especially my classes in physiology, the idea suddenly took hold.

SP: Once decided, where did you go to medical school?
Dr. Freeman: Howard University College of Medicine accepted me.  With a partial scholarship, family assistance, and part-time jobs, I was able to get through.
SP: What did you do after your 1955 graduation?
Dr. Freeman: I had an internship at Kings County Hospital in New York followed by a residency in internal medicine at Nassau University Medical Center in East Meadow, NY. Eventually I started working for Beth Israel Medical Center which was then focusing on the just-developing epidemic of opioid addiction. That was just over 50 years ago — and I still work there several mornings a week.  In the afternoon I see patients in my private practice in Harlem.
SP: What advice do you have about Covid?
Dr. Freeman:If sickened, anyone with a comorbidity such as diabetes, hypertension, heart problems, cancer, or any kind of infection should see a doctor immediately. People of color must be particularly careful. For reasons we don’t understand, Covid death rates are higher for this population. 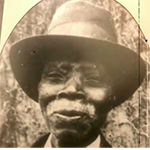 SP: How do you feel about the Black Lives Matter movement?
Dr. Freeman: I feel hurt and angry that my grandfather (right) was a slave. A quiet, gentle man, he always respected others — and others respected him, something I saw all the time from our neighbors while growing up. Because total respect is called for, I’m gratified by the outpouring of concern for the lives of people of color.
SP: What does “aging with attitude” mean to you?
Dr. Freeman:Respect!  It’s the vital attitude we must all hold — and not just as we age, but all our lives. ‘
Want to know more? Check out this TV profile. And this one.