“The characteristics of personality change throughout life, but it seems that individual nature remains rooted in the abyss of time.”

That’s how photographer Jan Langer sees the changes we go through as we age. Langer has an inside view: a news and portrait photographer in the Czech Republic, he has spent some time comparing images of people when they were young with their 100-year-old selves. His meditation on age is the basis for a thoughtful, impactful and deeply moving photo project, Faces of Century. It might be the best visual representation yet of the idea that “we are all the selves we have been.”

Langer, who has a background in social anthropology, sought out centenarians and asked them for photos of themselves in their youth. He then restaged their early photos in black-and-white, using the same simple setting and the same poses, and paired his remarkable series of portraits with his subjects’ images from decades ago. Langer started showing the work in Europe in 2013. Recently, it’s been discovered by the internet and shared on multiple art and design blogs.

How We Change—and Don’t

So, can Langer’s image pairs tell us anything about what we will look like at 100-plus—should we be lucky enough to live so long? Physiognomy does change for sure, as Langer points out in a (badly) translated statement on his website. But what about the rest—our sense of ourselves, our view of the world?

In some of his image pairs, the subject’s, basic character certainly shines through, unchanged through the years. The sense of challenge evident in the face of skilled locksmith Antonin Baldrman at 17 ripened by the time he reached 101. 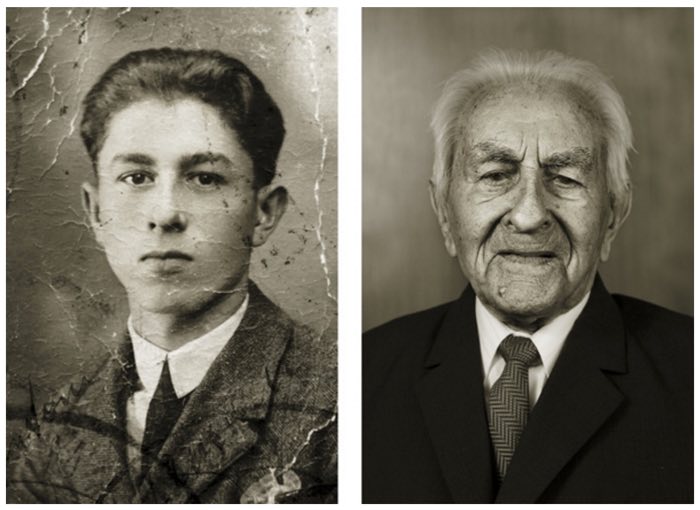 Others appear to have preserved their sense of optimism—for example, Bedřiška Köhlerová, in whose face at 103 we see the hopes she had for her future as a bride of 26, all captured in her lovely smile. 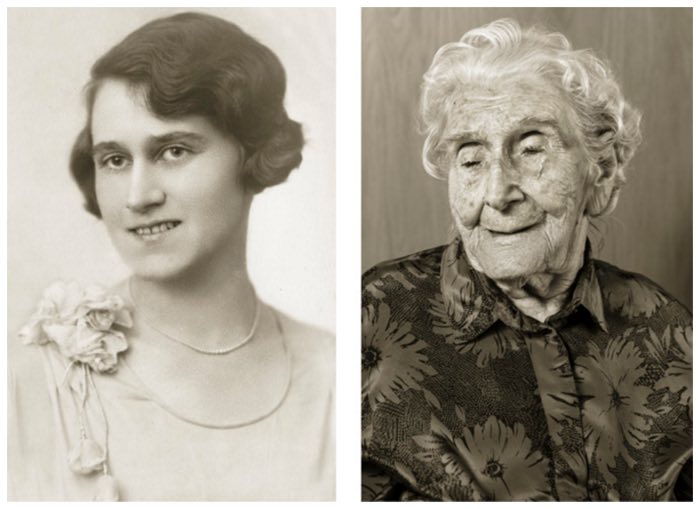 …or Antonin Kovář, a 25 year old bandleader, whose satisfied expression suggests that his optimism about the future as a youth was validated in old age, as a 102 year old. 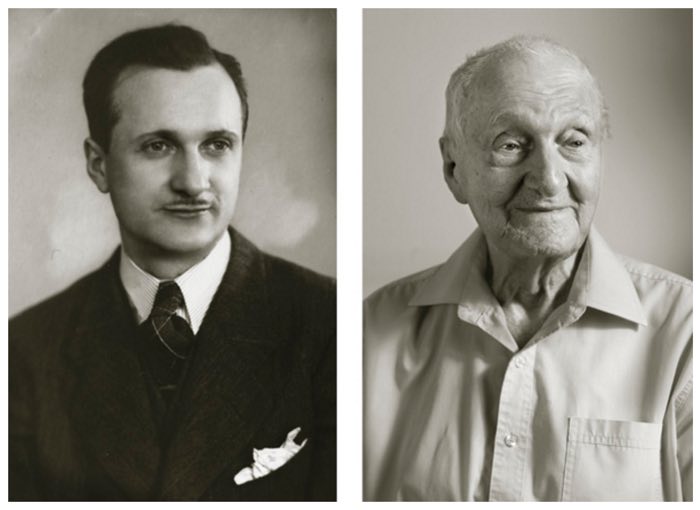 Some portraits might make you wonder what happened to the sitter. What happened in the 80 years since 22-year-old Anna Vašinová sat for this portrait on her wedding day? 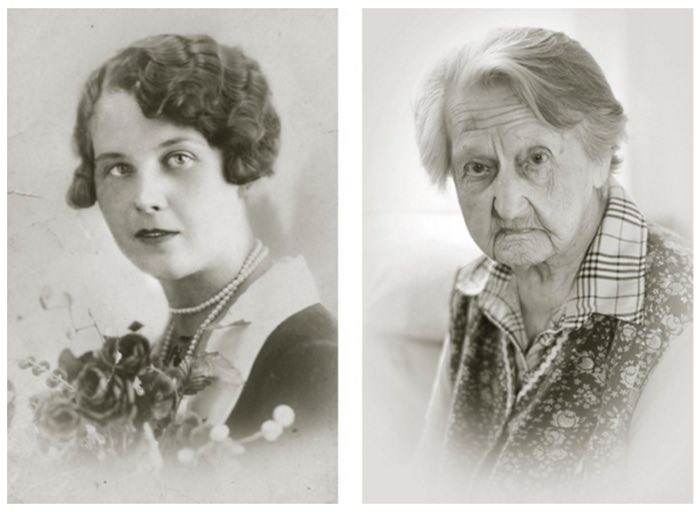 Another subject of Langer’s, Stanislav Spáčil started his career as an electrician as a 17-year-old. Now 102, he looks as if he may be simply amused at the whole idea of sitting for such a portrait. 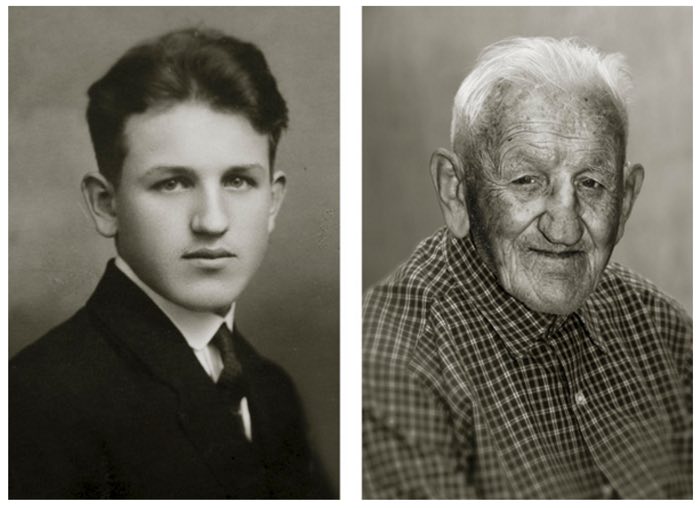 In some cases, the passage of time deepens the subtext of the photos. The quiet happiness in Marie Burešová’s eyes as a bride of 23 is refined and transformed into poignant memories at 101, with the same faint smile she had on her wedding day. She even has flowers. 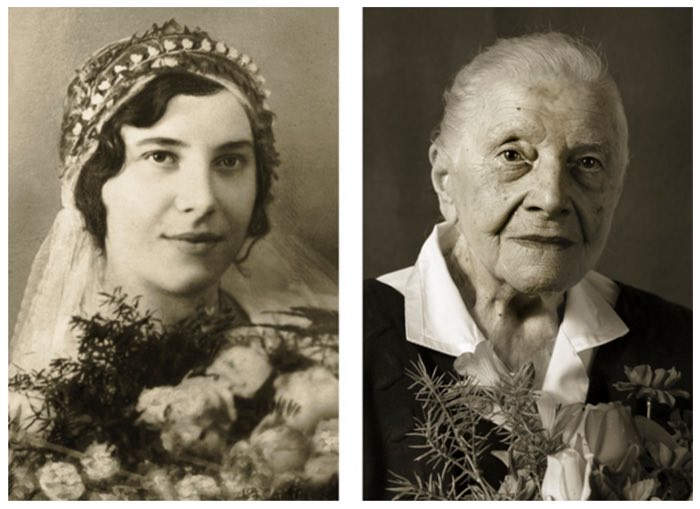 Langers’s technical proficiency for mood and tone is most evident in his portrait of 101-year-old Ludmilla, in which the photographer matched the darkness in his subject’s photo at age 23 (she gave that photo her to her fiancé, Langer tells us). The before and after of this woman could have been painted by Caravaggio. 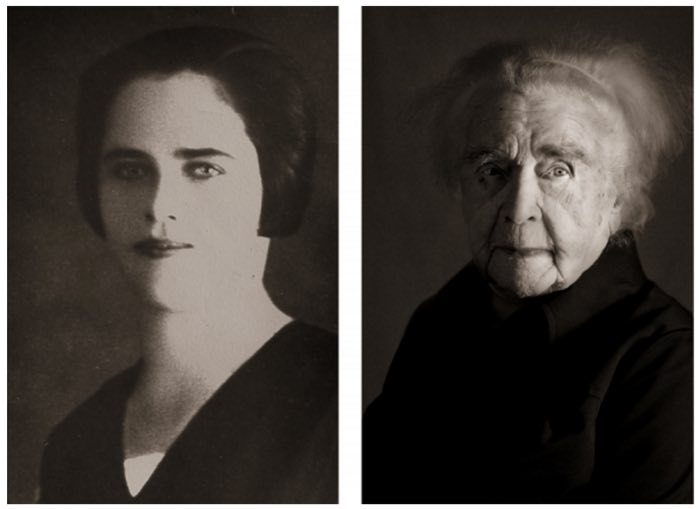 The group of people who Langer photographed are much older than the Czech Republic. They survived the Spanish flu; the Nazi occupation; World War 2; the Soviet occupation; purges of Jews, Catholics and anti-communists; the Prague Spring; the Velvet Revolution; and the fall of Communism—all that, and the day-to-day ebbs and flows of life. Their portraits inspire and illuminate.

What do you see in these image pairs? Share your thoughts in the comments box below.

2 responses to “Portraits of a Century: The Selves We Keep for Life”