By Raven Snook Thursday, January 9 No Comments Share This: 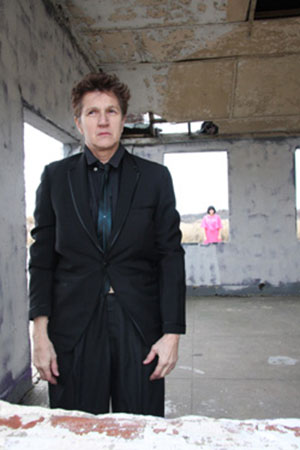 Peggy Shaw has always drawn inspiration from her own life. So when the soon-to-be-70-year-old suffered a stroke back in 2011, she knew almost immediately that her experiences would end up on stage.

Within months, she was back on the road starring in “MUST: The Inside Story,” a show about the medical profession from her unique perspective as a sexagenarian lesbian grandmother. She claims the tour served as her rehab.

It’s no surprise really: Theater has been Shaw’s panacea ever since her very first time onstage in 1975, when she screamed “Dyke! That’s what you call me!” in an autobiographical monologue that she says “got 31 years of aggression out.”

Since then she’s won a host of accolades (including three OBIES) and worked with many groundbreaking queer performance troupes, notably Split Britches, which she cofounded in 1981 with her longtime collaborator Lois Weaver. After decades of no-holds-barred exploration of her sexuality, body and identity, she and co-writer/director Weaver are examining the indelible impact Shaw’s stroke has had on her life, both on-stage and off, in “RUFF,” a new solo show.

A huge success at last year’s COIL festival, “RUFF” is in part Shaw’s attempt to fill the gaps left by her stroke with new life; it’s a tough, funny ode to wry resilience in the face of aging and loss.

In between rehearsals for RUFF, which opens this week at New York City’s famed La MaMa Experimental Theatre, Shaw took time out to chat over the phone about growing older as a queer woman and her new reliance on technology in her post-stroke reality.

How soon after your stroke did you know you were going to talk about it onstage?
I knew I’d write about the stroke, but I didn’t think about it for a while. I went right back to work: a tour of “MUST” in England. I was stupid to do it, but I just looked at it as physical therapy. Some nights I couldn’t even walk from the dressing room to the stage without help! It was an incredible way to get my body working again. I don’t know what drug it is your body creates when you perform, but you don’t feel any pain. I would tell the audience, ‘You’ve got to help me out. I had a stroke. We’ll see if we can do this.” They were wonderful.

You use a high-tech onstage assist: three monitors scrolling the play’s text. Is that a permanent part of your post-stroke reality?
It’s out of necessity. I can remember all my old shows – hundreds of them – but I have trouble memorizing new ones. Memorizing has always been hard for me, and now I have a good excuse not to do it.

I have memory and balance issues. Like when I’m trying to remember a word, I come up with ten other things that start with the same letter before I find the right one. It’s hard to know whether it’s the stroke or if it’s just part of getting older, but I certainly changed very quickly.

When I look at my CAT scans and MRIs there are noticeable gaps in my brain. I want to fill them with new things. I imagine it poetically: My brain is now like a green screen so I can project anything on it. “RUFF” is about survival: How do I keep performing as a person who has had a stroke? Sometimes I just go off and forget what I’m doing, but that’s built into the show. Luckily my work doesn’t have traditional arcs, anyway.

Although you’re well known on the underground theater scene and in the queer community, “RUFF” seems to be introducing you to a whole other demographic: people with mobility issues.
Yes. We’re specifically using the First Floor Theatre at La MaMa since it’s accessible to all: There’s just one step so most people can get in, even if you’re in a wheelchair. In May, I’m performing at a big disability festival up in Toronto [The Tangled Arts Festival], and Lois and I are trying to develop motion capture workshops for people who’ve had strokes or suffer from mobility issues.

We tried motion capture last year in Australia and it was amazing. When I put on that suit with all those dots, my body started moving in ways I couldn’t have imagined. The suit is tight and feels so good; it compresses you and makes you want to stand up, especially when you see yourself on the screen. You keep practicing how to move. It’s a new way of seeing yourself. It’s so freeing and empowering – we found ourselves jumping around like little kids.

Do you think aging is different for queer women?
Totally different. I have a lot of heterosexual sisters and as they age they’re panicky about having some guy there to help them when they get old. Having survived as a queer all my life, I continually think of ways to get along. I don’t need to rely on a tired old guy to go to the store for me. Most people I know end up in an apartment alone by themselves very happily. Also, Lois and I are both teachers, so we’re always around people who keep us young and take care of us – not just helping us down the stairs, either.

I’ve been thinking so much about survival lately. There are people who survive, and I think I was one of them. I came to New York City to find my tribe to help me survive, and now I have a huge community.

You’re still creating and performing at an age when many yearn for retirement. Do you ever think about it?
Only when I’m opening a new show and feel stressed out. It lasts for maybe three days. That’s when I think, I wish I was a plumber, not a performer. I’m trying to get my grandson to study plumbing or electricity because guess who makes all the money?

But so many people just die after they retire. If I retire, I won’t have that constant deadline to create. That’s the only way to get me to do anything.

Funny they call it that: deadline.