At the age of 60, I stepped out of my comfort zone and into the goalkeeper box.

I’d been playing midfield in soccer for 10 years, but because of an injury, I could no longer run or kick. So I traded the good aerobic workout I got running after the ball. Now, my heart works double-overtime from fear while I’m waiting for the ball to come at me.

You might think I’m a crazy old lady who should quit while I’m ahead, but playing with my team is important, and I’d argue that more women my age should consider team sports.

Some older women hold to a stereotype that dictates age-appropriate activities: water aerobics, reading (large print), chasing after grandchildren, and maybe some golf, tennis or yoga if you stretch the imagination. Although I enjoy some of these, I’m not giving up my many miles a week of walking and hiking, or my weekly soccer game.

I started leaving my comfort zone when I turned 50 and a friend invited me to play in a women’s soccer league. I was in very good physical shape and could run relatively fast, but that was the extent of my skill set. The average age on the league was 36, and many of the women had played soccer in college. Surprise: There was no waiting list, no incredulous gaze, and as soon as I said yes, I was on the team! 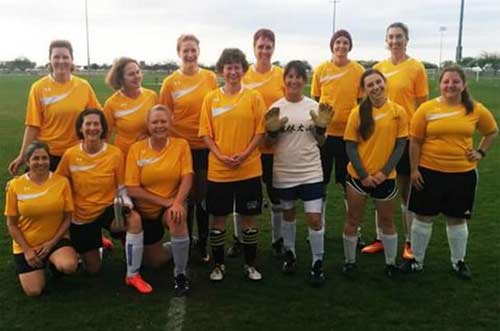 That’s not to say that some players weren’t irked the first time I scored a goal for the other team. These things happen. With time, I improved to the point that I’ve even managed to be in the right place at the right time and score a couple of goals. In this game, anyone who scores is an instant hero, and the congratulations are wild and physical.

Our weekly soccer game has become my supportive Sunday community. I still enjoy having to turn down other events, explaining, “I have a game.” Our team has celebrated marriages, divorces, births of children and grandchildren, and college graduations. And while many of my friends and acquaintances thought I was crazy when I first started playing, some now say they think it’s pretty awesome that someone “my age” still plays.

Since “my age” keeps adding one each year, the “awesomeness” level is likely to increase as I grow older.

The Benefits – and Risks – of Team Sports

We all (hopefully) know that exercise is key to staying healthy, especially as we age. But team sports benefit us mentally and emotionally, too. A recent study found that older women age 55 to 90 who participated in sports experienced positive feelings of community and inclusiveness, a strong sense of identity and a positive spirit of competitiveness. Although there are few studies like this, the findings mirror my experience.

Off the field, we play the roles of wives, mothers, grandmothers, professionals; on the field we are competitive. Forget the stereotypes of older women as passive, weak and dependent. Being on the field helps us see ourselves as strong and vital, like young gazelles racing to a ball, or leaping effortless inches to head it away.

In 2006, our team won the league championship for our division in Tucson. We felt as if we had won the equivalent of the World Cup, at least for a few minutes. There were no parades or interviews, but we did get instant posture improvement as pride and competitive spirit buoyed us to new heights. I admit, every time I proudly put on the T-shirt memorializing that championship year, I take a moment to make sure that my name, listed among the team players on the back, didn’t get erased in the wash.

Of course, playing team soccer is not without risk. Young and old alike, we’ve suffered torn ACLs, pulled hamstrings and broken ankles. Last year I may have done too much of everything; I trained for a 500-mile trek across Spain, practiced yoga three times a week and played soccer. I enraged a hamstring, and it just never healed. Instead of taking time off, I kept up with all of my activities, and kept reinjuring it. The muscles screamed each time I tried to run or kick a ball. I continued to hobble about on the field, because sometimes a fresh pair of legs for a few minutes is helps the team. Apparently we more senior women take a longer time to heal and have an increased risk of re-injury.

After I was injured, I considered hanging up the cleats. But I couldn’t do it. For one, we got a sponsor who provided us with new snazzy uniforms. It felt really good to put on the new jersey! Then I took on the temporary position of goalkeeper. I’m perfect for it: short, thin, can’t jump and have no particular hand-eye coordination. But when the ball approaches, I can make myself big and act scary. If they miss the shot, I think “yay me.”

Our team name, Furinkazan, according to Sun Tzu’s “The Art of War,” means “Move as swift as a wind, stay as silent as a forest, attack as fierce as fire, and provide an undefeatable defense like a mountain.” I don’t move as swift as the wind anymore, but I can still be silent and fierce as I defend the mountain. Our team name alludes to the different traits each of us brings to the field and to life. And who’s to say I won’t get my gazelle legs back. I’m keeping those cleats for now. 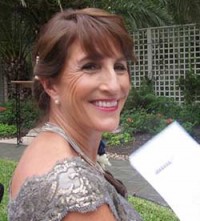 We don’t have to limit ourselves just because we’re a certain age. Will you (have you?) try a team sport?

Off the team, Carmen Marriot is an attorney and hazardous waste expert based in Tucson, Arizona. She recently became a Public Voices Fellow with the The OpEd Project, whose mission is to increase the range of voices we hear in the world.

3 responses to “Outside My Comfort Zone: On Becoming a Goalie at 60”