The Holiday Gift thread had a ton of comments about Weird/Worst gifts. Some simply strange (a box of orange Jell-o? A dog toy to a non-dog owner?), some thoughtless (candy for a dieter? PJs for someone who never ever wore them?) and some just, well, indescribable.

And it’s amazing how many of these indescribable gifts came from SO’s the commenters described as “ex’s.”

…an enormous royal blue ELVIS LAMP (from an ex)

…the man I absolutely loved and who was living with me, gave me a plastic Alien figure that was about 2 feet long…he followed shortly afterwards….

Reader Fran got a piece of paper and a hint.

And a note to married men:  make sure you keep track of the gifts you give your wife…and your side piece. Why? Just read the comments from readers Cassie E. and Lee.

A few readers took exception to my position against ‘household’ gifts, like Shirley and K.G. (hope Santa gets you that Roomba!).  Others praised the convenience of gift cards…and I see their point.

The best advice came from Reader Patti, who simply advises, “Know your recipient.”

Every comment is a gem, so make sure you read them all and add your own! And have a happy holiday season, full of all the right gifts – like health, happiness and love.  See ya next year!

Only Santa can give the perfect holiday gift, because he’s, well…Santa.  Everyone else muddles along with a combination of hints, outright requests/questions, or guesses.

The best gifts, I think, are the ones that make the recipient feel seen.

Years ago, before online shopping, my late husband surprised me with a framed copy of a painting I had admired the three times we visited Paris and the Louvre. 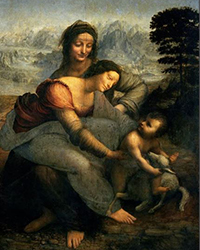 Each time I couldn’t buy a copy from the gift shop. The gift shop was closed, or it was out of stock. The last time we went, the gift shop workers were on strike! I wailed, “I’m never going to get a copy of that!”

He secretly contacted an acquaintance who was going to Paris and arranged for him to purchase it, bring it over and had it framed for Christmas.  When I opened it, I was so happy and touched I cried.

Some of them are educated guesses.  A woman I knew made it a habit when outside with her husband, to stop at the same jewelry store every time and remark on a particular pair of earrings.  She all but wore a sandwich board saying “I want this.” Guess what he gave her?

A note to men: do not ever and I mean ever, give your SO household tools, machines or equipment.

Other times, though the guesses are, to put it kindly, uneducated. A note to men: do not ever and I mean ever, give your SO household tools, machines or equipment.  One guy I was seeing gave me a frying pan.  It was hard to resist the urge to hit him over the head with it.

“Don’t Let This Happen to You” Gifts

A related no-no: a gift that really benefits the giver.  A cousin of mine gave his girl three boxes of lasagna noodles.

Another route to avoid is to simply ask what the recipient wants. You may not like the answer. A woman I know asked her SO what he wanted and he mentioned a highly specific sexual act.

Of course, the last resort is a gift card or cash.  If every gift sends a message, this one says “I can’t be bothered.”

A close runner up, though, is the gift that is so off key it’s almost funny if it weren’t so appalling, like some of the ones listed here.

But how about you? What was the worst/weirdest holiday gift you’ve ever received? Share your story in the comments!

Virge Randall is Senior Planet’s Managing Editor. She is also a freelance culture reporter who seeks out hidden gems and unsung (or undersung) treasures for Straus Newspapers; her blog “Don’t Get Me Started” puts a quirky new spin on Old School New York City. Send  Open Thread suggestions to editor@seniorplanet.org.

Looking forward - and back at New Years and reviewing lessons learned. What would you tell your younger self?
Healthy Aging

Meet the newest Senior Planet Sponsored Athletes and learn their inspiring — and fun — approaches to fitness, from CrossFit to pickleball.
Open Thread

Readers share family wit and wisdom, from the zany "Here's mud in your eye, fishface!" to the practical "Those dishes won't wash themselves." What's your memory?