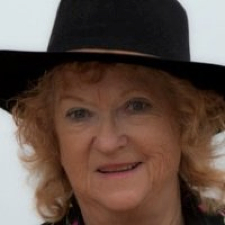 Jo Ann Bender believes in the law of attraction. She says we attract what we think about, both good and bad. And she has proof –  in the form of a vintage RV.

Thoughts of owning a motor home had been on her mind for months. Every time she saw one, her longing became more intense. But as she tells it in her travel memoir “Snowbirds,” when she mentioned the idea to her husband, “He looked like a cat staring at substandard food.”

Practicality won him over. The couple, who between them have 10 children and multiple grandkids, were planning sleeping arrangements for a family reunion at their mountain ranch in northern Washington; parking an RV there would give them extra space for visiting family. Jo Ann though a vintage one would have charm and be comfortable, and Bud agreed, so they shopped around and finally found the “Old Girl,” a $7,000 turquoise-and-white 1973 Ford RV.

Taking Old Girl on a 2,000-mile journey was Bud’s idea. He had a meeting in Texas and suggested that instead of flying, they take six weeks in early winter for some slow travel. They could wend their way south from the Pacific Northwest to warm and sunny Texas, exploring and visiting friends and family along the way.

And so they became Snowbirds – Northerners who travel south for the winter.

Their journey, as told by Jo Ann in her memoir, ended up being more of a misadventure than the smooth ride they’d anticipated. One calamity after another – usually a mechanical one – occurred on the road. But through it all, former engineer and pilot Bud, aka Skipper in the book, never gives up, and Jo Ann, a novelist and cookbook author, finds a way to enjoy every minute – even when they’re stuck for hours waiting, yet again, for a tow truck to arrive. Between the breakdowns and the coffee grounds, the couple, as the book’s subtitle says, “put love and adventure back in a marriage.”

Jo Ann talked to Senior Planet by phone from her home.

What did you do when Bud suggested going south in the Old Girl?

I started making lists! We took the RV out on a few test drives and there were some problems that had to be corrected. Little did we know what the challenges would be.

You write that people in their 60s and 70s, as you and Bud were when you went on the road, are “nearing a point in their lives when time can be substituted for money.” What do you mean by that?

There’s a freedom. The spirit of adventure takes over once you’re going down the road. It’s time to hike to new vistas, go to ball games, visit a quilt gallery if that’s your thing, see National Parks and renew your relationships with relatives and friends scattered all over the country.

It seems that every other day you were on the road, something broke, and repairs were sometimes difficult and mechanics hard to find. Did any of those minuses turn into plusses?

We could have thought, “Oh no, another breakdown! Isn’t this horrible! I’m just going to sit here and pout.” But we allowed plenty of time to get to Texas, so that eliminated a lot of stress. Also, there were several ways to look at the situation. For instance, while waiting for a tow truck to come from many miles away, we took out our bicycles and rode around and explored.

There were other challenges besides mechanical breakdowns, like how to drive in high winds or heavy traffic, or parking in tight spaces. Before, I was intimidated by driving anything too big, but now I can drive a loaded trailer by myself to empty at the landfill.

You made a promise to yourself to never stop exercising. How did you do that on the road?

We had our bicycles. We really enjoyed biking along the riverfront in San Antonio. You can do yoga on the grass when the weather is good. Some people take their four-legged critters on trips – dogs need to be walked every day.

Your book is dotted with discoveries that you made on this trip. You’ve even numbered them. What were some of the most important discoveries?

You view your relationship with your partner on a different level. There are topics to talk about that you would never discuss at home base.

You meet people who live their passion in their daily work, and you want to be more like them. We met some very cheerful mechanics on the road.

Traveling in the RV also gives you more time to think about spiritual things, to watch sunrises and sunsets. On our trip we often went to church on Sunday wherever we were, even if the church wasn’t our denomination. We called it church visiting.

What was the greatest adventure or misadventure you had on the road?

There is a fantastic place for camping in a State Park in the southwest corner of New Mexico, north of Deming, a city unique for the quality of its water. At the entrance there is a sign saying, “You have one half hour to choose a site.”

Once inside the gates, we were driving and saying, “Is #53 better than #27? Each one has something to offer in awesomeness or view. The camp sites are within walls of rocks, each separate from another. Nearby are hot springs – a place that the first explorers of the US are rumored to have enjoyed. They’re within the cone of an extinct volcano, Skipper says, and being a geotechnical engineer, he knows. The wonder is unforgettable.

You and Bud have been married for six years, and you wrote that couples who want hotter sex should buy a motor home. What’s so sexy about an RV?

When you’re out there, it feels like the first spring of your relationship. You’re not distracted by other things. It’s nice if the man has a romantic streak.

Keeping up your passion. I think the key is to be flexible, adaptable, willing and receptive. In other words, be lighthearted and cheerful. We’re wise women who can be mentors.

What advice would you give to people your age who are thinking of an RV trip?

We always suggest that people start small. You want an RV that has a comfortable chair and a very comfortable bed.

Before going on the road, find the biggest parking lot you can and practice driving around.

Have some hands-on practice before you start out. Know how to plug in the electricity, how to deal with the grey water and the black water.

The less you take the more you have. People who travel a lot know they can get along with less stuff. You don’t need to take all your recreational equipment and all of your clothes.

Would you do another RV trip?

Absolutely. We’ll visit that area of New Mexico again this spring and also go to the Northwest corner to Chaco Canyon, the largest of the Anasazi ruins.

As for RV-ing, we’ve relished the freedom and the joys it offers before, during and after a trip. Now we travel in a little, 20-foot Pleasure Way, a converted van that we call Sally.

“Snowbirds: How A Road Trip in a Vintage RV Put Love and Adventure Back in a Marriage” is available on Amazon in paperback and Kindle editions

3 responses to “On the Road in a Vintage RV”

Readers share their magic moments when everything just seemed....perfect. What's yours?