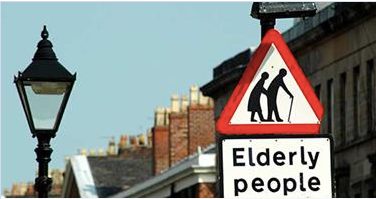 A couple of weeks ago, we decided to get to the bottom of what older people in this country want to be called. In an article on Senior Planet, Erica Manfred explored some of the options – elder, older, oldster, geezer, crone, old lady, older adult; then she asked you to pitch in.

@ElijahTyre  I enjoy the perks that come with being a senior citizen. I also refer to myself as an old dude. In fact, I plan to make some purchases from “Old Guys Rule” tee and sweatshirt collection.
@ElderJourney  Crone, hag, queen, elder, senior, old timer, boomer, grandma… it’s all good.
@Geezer I’ll give you one guess, sonnyboy.
@Leslie Grollman In Portland, Oregon, we are called ‘honored citizens’ by the transit system…AND we get that discount!
@Georgia Klay I prefer Elder. It speaks of respect for age.

@SilverySage I’m SAGE
@TheLightHasCome I prefer older adult, because in the context of a culture that often infantalizes the aged, ADULT adds a needed specificity.
@Siobhan_Odwyer What interests me more is how the male terms imply eccentricity, while the female ones imply frailty. (Good point)

Wendi in NYC says: This is a great subject. I don’t care for “senior” much because it reminds me of high school (shudder). I like Elder because it’s elegant and sorta Spanish (“El Der!”)
Linda says: We call the older generation in our family “Golden Oldies,” and I like the respect it implies.
Ashton Applewhite says: I nominate “olders” as a noun – a simpler version of “older adult,” the only acceptable term. It’s short, non-value-laden, and emphasizes that age is a spectrum.

165 answers came via our poll 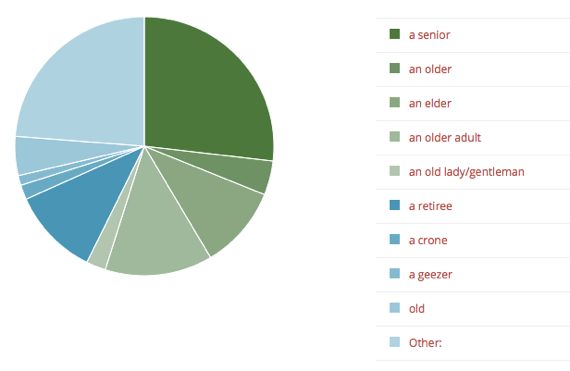 Which name won the poll?

Our unscientific survey produced a clear winner: “Senior” led the pack – not surprising, maybe, on a site called Senior Planet.

But way up there with “senior,” the second most popular choice was “Other.” If you’re looking for a new label, read on:

There were many version of “Don’t label me.” Some of our favorites:

And almost as many versions of  “Wise”:

Among the rest, here are some of our picks:

The poll remains open; please weigh in by clicking here. And please share your favorites in the comments below.

2 responses to “Old, Older, Elder, Senior… The People Have Spoken”