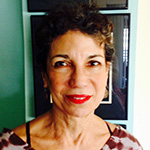 An awards-winning and ground-breaking television and radio producer since the 70s, Carmen Matias (at left) says her talent is spotting talent and taking risks.  Since the 80s she has been producing cabaret shows starring her husband, Hechter Ubarry (pictured up top). Carmen, who has attended a Senior Planet meet and greet and taken a class, recently spoke with us about her storied career, her newfound passion for social justice and how to produce a stellar cabaret show.

Let’s start with what brought us here: Cabaret! How do you go about producing a good Cabaret show?

“…many are called to cabaret, but few are chosen.”

CM: This is a How-To from Carmen Matias’ on how to put together a Cabaret show:

First, you need a name for the show…

…even if it’s a working title. For my first show I produced that my husband starred in, I chose “Then & Now.” The “Then” was about him growing up in the projects in Harlem (a stone’s throw from the Apollo Theater) and his musical influences. The “Now” is about his career on Broadway and in movies.

Then You Select the Songs…

…that will support the title. Usually in a cabaret show, you need eight to ten songs, and they should run the gamut of slow, fast, slow, fast.

In-between the songs, you need to have a script, or “patter.” You write the patter ahead of time to fill the 50 minutes. It can be as poignant or as funny as you’d like to be. Unfortunately many are called to cabaret, but few are chosen.

“I have no talent to sing or dance or that stuff – my talent is recognizing talent and doing things that other people find scary.”

What were you doing before you started focusing on Cabaret?

CM: I started working in TV in 1976, after graduating college. Eventually, I went to WOR-TV in New York City in 1983; I produced a show called “Women at Work” and we did public affairs. I started in November.  I told my Executive Producer that I couldn’t do another Thanksgiving show about how to cut up the turkey 50 different ways. They had never really had a producer like me.

I proposed the idea of calling women in my network, known actors and people like that, and asking them “how do you deal with the holidays when you can’t go home? You’re on set, you’re working, but your heart isn’t there because your family isn’t.”

“They had never really had a producer like me.”

I called in a favor and booked Mario Cuomo’s’wife Matilda to do the show. (Tony and Emmy award winning actress Colleen Dewhurst also joined the program along with other celebrities.) People wrote in about the show and they absolutely loved it. It was something new!

I also worked on a radio show called “Executive Dining Guide” for WBBR. I even got a James Beard award for that. It’s not like I can cook. But I can book chefs. And I know good food.

I have no talent to sing or dance or that stuff – my talent is recognizing talent and doing things that other people find scary…but I have a strong belief in my ability to pull things off and a deep faith in God and so I just go for it.

What was it like being one of the only people of color in the room throughout your career?

CM: I was the only one in the room. Often I would give an idea for a show and no one bought it, but then the same idea a half-hour later came some someone who was not a person of color and suddenly it was a great idea. What I learned to do was piggyback, because the minute you force the issue, you’ll get shut-out. I always tried to work within the system.

“If you can do something, do it. Your voice matters.”

My greatest relief now that I don’t have a 9-to-5…what you think about me is your business, not mine, so I stand by my principals. Now, I speak up.  Sometime others don’t like it. But the Black Lives Matter movement taught me that things have to change, they have changed and they will continue to change and you need to just step up. If you can do something, do it. Your voice matters.

CM: I think it’s important, as a Latina and a woman, that we let the community know that not only do we have rights – our voices need to be counted. We need to be given entrees into the discussion. That’s why I’m getting involved in the New York Mayoral race.

People think because we speak with an accent, we think with one. But we are vibrant warriors and we’re not taking it anymore. We need to be counted.

To see the most recent Cabaret show produced with her husband called “Call me Papo,” click here!