Senior Planet’s largest advocacy event of the year, Raising Hell, takes place Wednesday, December 9, from 3 -5pm EST, featuring an online panel of some of America’s most influential older adult activists. After the panel, you can join us for small group discussions with other Senior Planet community members. Here’s a quick introduction to the line-up – now all we need is you! Get more details here to register and get Zoom info. 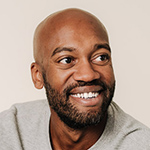 Raising Hell’s Moderator, Sam Sanders is a correspondent and host of It’s Been a Minute with Sam Sanders at National Public Radio; engaging with journalists, actors, musicians, and listeners to gain an understanding of news and popular culture only possible through conversation. The podcast releases two episodes each week: a “deep dive” interview on Tuesdays, and a Friday wrap of the week’s news.

Previously, as a key member of NPR’s election unit, Sam covered the intersection of culture, pop culture, and politics in the 2016 election, and embedded with the Bernie Sanders campaign for several months. He was also one of the original co-hosts of NPR’s Politics Podcast, which launched in 2015. He’s spent time at three Member stations as well: WUNC in North Carolina, Oregon Public Broadcasting, and WBUR in Boston, as an intern for On Point. Sanders graduated from the Harvard Kennedy School in 2009 with a master’s degree in public policy, with a focus on media and politics. 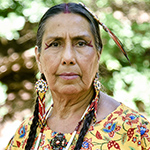 Casey Camp-Horinek is an Environmental Ambassador of the Ponca Tribe of Oklahoma and Hereditary Drum-keeper of its Women’s Scalp Dance Society, elder, and matriarch. She is also an Emmy award-winning actress, author,  and internationally renowned, longtime Native and human rights and environmental justice activist. Camp-Horinek has led efforts for the Ponca tribe to adopt a “rights of nature” statute and pass a moratorium on fracking on its territory. She has traveled and spoken around the world. 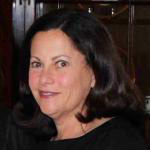 Sherry Matusoff Merfish, current New Leaders Council Board Treasurer, has had a long career in advocacy and fundraising. As a Majority Council Director for EMILY’s List, she conceived, planned, and implemented the Major Donor program in many states, including her native Texas. Prior to EMILY’s List, Merfish was an advocate within the Jewish community, doing speaking tours fighting the pernicious Jewish American Princess stereotype; this effort generated widespread press attention and created a significant cultural shift. She co-founded (with her daughters) NotAlone.us, an organization that asks women to join the conversation around reproductive justice. Merfish holds a BA from the University of Texas at Austin, a MA in American Studies from the University of Southern California, and a JD from the University of Houston Law Center.

“I think it is a safe assumption that the older generation is expected to pass on an improved world to succeeding generations,” Merfish notes.  “Sadly I cannot say that is the case with increased wealth disparity, climate change, and systemic racism all threatening human progress. Studies have repeatedly shown that by sharing our life experiences with others we foster resilience in younger people who rely on those stories to help shore themselves up as they face their own challenges. Seniors who are in a position where they are not threatened by a loss of employment, for example, are more emboldened to speak up especially for those whose voices are unacknowledged or ignored.” 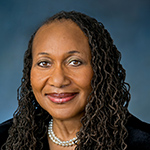 Dora Moss-DeVan is a 2017 Graduate of The Iliff School of Theology with a Master of Divinity Degree and was ordained at First Christian Church, 2000 North Lincoln Ave, Loveland, CO. She retired from the Federal Government in October 2015, after 45 years. Moss-DeVan was born and raised in Grenada, Mississippi, where she was active in Martin Luther King, Jr.’s Civil Rights Movement and worked with the late Reverend King.  She is a strong supporter of social justice, and denounces any form of racism; learn more of her inspiring story here.

“I am passionate about being my sisters’ and brothers’ keeper.”

Why must senior mobilize to do this work? “The significance of ‘Raising Hell’ or ‘passionate advocacy’ is to know within oneself what she or he believes and to not be moved or changed by what someone else thinks or says, Moss-DeVan points out. “I am passionate about being my sisters’ and brothers’ keeper. We as a people have always had to raise some kind of hell in order to survive, in order to protect our children and grandchildren.  The significance of ‘raising hell’ is also a time to remember those whose shoulders we stand on; those who have fought for us and gave their lives in order for us to have a better life; those who sheltered us and taught us how to survive in an unjust society, the institutions of racism and hatred that we face every day.” 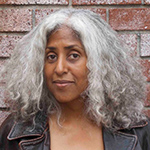 “I don’t believe we should “step aside” or “pass the torch.”

How does she hope to engage seniors for this event?   “I think seniors are so underutilized in our movements. I do believe in intergenerational work that respects the wisdom and leadership of younger people—and I also don’t believe we should “step aside” or “pass the torch.” It’s such a patriarchal, limiting idea.  I’d much rather we all have matches. I want seniors like myself to feel confident in their voices, feel confident in their contributions—not just as “wisdom bearers” and keepers of the story, but as co-conspirators whose lives are just as much affected by policy decisions as our younger comrades.”

“Seniors have an important role to play,” Makani notes, “in helping to build this bridge between the experiences many of us have on the frontlines of poverty, disability, caregiving, food security, fair housing, income support and so much more.  We have to be co-architects in the creation of a world that works for everyone.” Besides looking forward to a great conversation with Senior Planet members, she’s also an avid fan of funk music.

Want to be the change you want to see in the world?  Register here to be part of Senior Planet’s biggest advocacy event of 2020.  Raising Hell takes place on Zoom on Wednesday, Dec 9, from 3 -5pm EST.