When you think of Senior Planet course offerings, you might envision technology classes on subjects like computers, smartphones, and email. Recently, a new subject debuted into the virtual classroom:  acting.

After the COVID-19 pandemic began, the Seniors in Play theater program teamed with Senior Planet San Antonio, allowing members and participants to step onto the digital stage and express themselves in a brand new way. The result? A flourishing community filled with enthusiastic learning, impassioned performances, and blossoming friendships.

The Show Must Go On

Seniors in Play is a theater program for older adults, founded in 2017 by award-winning actor Tony Plana (see right). 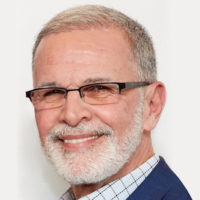 This past March, when senior centers, libraries, and community centers in San Antonio began closing due to the Coronavirus outbreak, the Seniors in Play program was in jeopardy of being temporarily shut down. Mr. Plana however, was not about to let anything halt his students’ progress.. “Why should we stop what we’re doing, when it’s obvious that now they need this kind of programming even more?”, Plana asks. “They’re going to be isolated more than ever, so they’re going to need connectivity, creativity, and community.”

Through local connections, Plana met Senior Planet Texas State Director DeAnne Cuellar, and the Seniors in Play program was soon brought into the fold as a weekly virtual class offering on seniorplanet.org. “Technology has revolutionized the way older adults can express themselves during COVID-19,” Cuellar says. “The performing arts is no exception.”

Senior Planet San Antonio supplies the technical support for the program through its Zoom video conference rooms. A trainer joins each session as a “virtual stage manager,” helping to ensure stability throughout the two-hour sessions. Mr. Plana brought in Bill Gundry, accomplished actor and theater director, to lead the course. Gundry has been pleasantly surprised by the seamless transition from in-person classes to virtual meetings behind computer screens. “As everyone has gotten more comfortable, it’s worked out great,” he says. “It’s not what we could do if we were on a stage, but at least they’re getting their voice out, and I think that’s what’s important.” 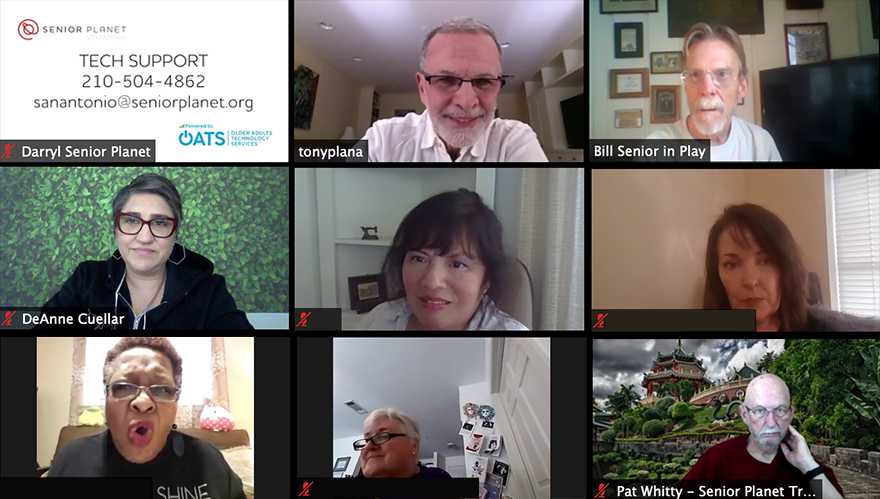 Beginners start with the “Intro to Seniors in Play” course every Monday and Thursday. The introductory class features acting exercises, where students discover theatre principles and step outside their comfort zones. More seasoned performers join the “Original Seniors in Play” class on Wednesdays and Fridays. This group works on advanced material and productions, even writing their own monologues and short plays to perform.

Although a New York resident with the busy schedule of an actor, Plana does his best to join the Friday morning sessions as a co-teacher. He can see the tremendous impact the program is having on its participants. “A unique type of socialization takes place,” says Plana. “It’s creative; mentally, emotionally, and physically-involving. It’s also a great stimulant of cognitive function.” 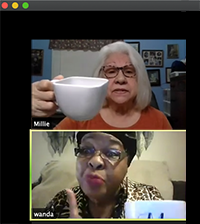 Occasionally the two classes will team up to observe and learn. Veteran participants Millie Hilbrich and Wanda Webbe (see right) recently visited the Intro class to perform a one-act play and demonstrate the work being done by the advanced students.

Millie, with just one year among the “Originals,” has developed both her acting skills and an appreciation for the art form. “There are times when all we do is watch others rehearse,” she explains. “Those are learning opportunities for us. I always look forward to our rehearsals.” Now a thriving member of this community, she says “COVID-19 has only made us more determined than ever to persevere and continue on.”

Wanda is a more experienced player with four years in the program. Over the past four months, the format has changed drastically but she is embracing the challenge. One of her favorite aspects of the class is the comraderie. “With us working so closely together, it’s like a big family,” she says. “We look out for each other. You find out you have a lot in common with each other. I’ve met a lot of friends.”

What’s next for Seniors in Play?  Plana hopes to stage a public acting showcase for the advanced class this September, recreating the feeling of a live performance in a virtual space.  Working with Senior Planet, the effort will push the limits of Zoom’s technical and artistic possibilities with ideas like shared virtual backgrounds, costumes and props, and special editing techniques.

Plana calls the Senior Planet partnership “a marriage made in heaven,” that he hopes to expand. “We’ve talked about looking to export and cultivate it in areas like New York and California; offering the program virtually now, and eventually physically in a classroom when we’re able to come back.”

“I would encourage anybody to come and join the group,” Millie Hilbric urges.  “Since I have been part of Seniors in Play, I have discovered that life isn’t over because of the golden years. On the contrary, it has opened up a lot of doors for me, mainly within me, myself.”

“Introduction to Seniors in Play” meets Mondays and Thursdays at 10:30am CDT. Find an upcoming class session and join here.

Photo of curtains by Christos Giakkas from Pixabay. Photo of Tony Plana courtesy of tonyplana.com

9 responses to “Senior Planet Debuts with Seniors in Play”