“I’m thrilled to have been selected as one of Senior Planet’s first Sponsored Athletes, especially since I never dreamed of being an athlete, certainly not one who got started in my late 60s. I hope my story can serve as an inspiration that it’s never too late to learn something new.

Five years ago, I happened upon a documentary on PBS called “Ping Pong” that focused on four competitors ranging in age from 80 to 100 years old at the global World Veterans Championship Tournament. It looked like it was more than a game for them. They weren’t just competing for medals; they were refusing to let go of life.

I understood that. A few years before, the bottom had dropped out of my life. Within a short period, I had back surgery for spinal stenosis and my ailing husband died. I had to pack up the family apartment and find myself an affordable rental. Then three months after he passed away, in the depths of the Great Recession, I got laid off. That’s four out of the top five life stressors within a few months. Depression isn’t my thing, but I’ll never forget how alone and empty I felt schlepping my file cartons from work back to my little apartment.

I started a freelance publicity company, working off my dining table. I was feeling isolated, which was like solitary confinement for me since I had worked in offices surrounded by colleagues for over 45 years. I wasn’t sure what lay ahead, but I knew I needed to get out of the house. And after seeing that documentary, I recognized that ping pong could be a way out—a sport I might be able to play for the rest of my life—and so began my journey.

They weren’t just competing for medals; they were refusing to let go of life.

I had grown up somewhat athletic, but playing sports came to a sudden stop in college when I was in a car crash that resulted in a dislocated hip. After three weeks in the hospital and five months on crutches, the doctors advised me to take it easy and avoid impact like running or jogging—for the rest of my life.

After seeing that documentary with 80 and 90-year-olds playing, I thought ping pong seemed worth a try. I went with a friend to Spin, New York’s popular table tennis-themed lounge and club.  We loved the experience and worked our way into league play. Over the next year, I played a lot, lost a lot, got tired of losing, and came to realize that as much as I loved playing, it would be more fun if I could win sometimes. So I found a coach and actually started to win more often. What a euphoric feeling!

Three years ago, after many hours of coaching and the encouragement of more experienced players, I entered some official tournaments, and I have amassed quite a collection of medals. Through it all, I’ve learned that ping pong can be a great equalizer. I’ve played men and women older and younger than I am, people in wheelchairs and even some nine-year-old kids (a humbling experience) who came with awesome skills and their own cheering section—friends and families laden with shopping bags overflowing with yummy snacks. I’ve lost some and won some. And I can assure you winning is better. Recently, I’ve been lucky enough to be the New York State Senior Games gold medalist in Singles, Women’s Doubles and Mixed Doubles. And I scored bronze medals at the National Senior Games and the USATT Nationals. I also won my first prize money: 30 bucks. (It’s not a money sport).

I’m almost 75 now and ping pong has introduced me to a new world of people who are smart, off-beat, decidedly NOT part of the country club set. I’ve become friends with wonderful people I would have never met. It’s led to new freelance work projects, membership in a book club, and a board seat on AYTTO, a youth table tennis non-profit that brings this egalitarian sport into schools. 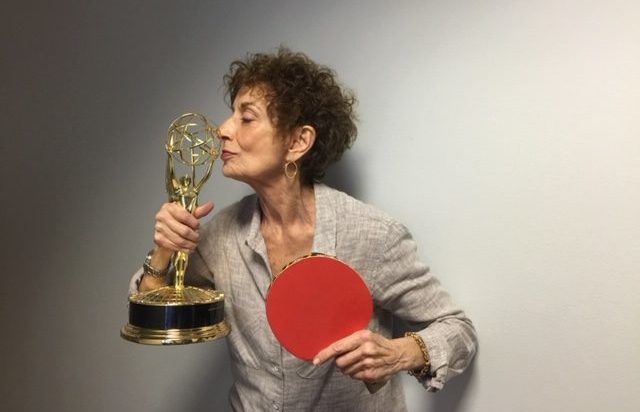 Ping pong has also delivered my 15 minutes of fame. I’ve been profiled by the Wall Street Journal, amNewYork, and half a dozen New York City television news shows. My favorite was a segment done by our local PBS station, which went on to win an Emmy Award.

I’m filled with gratitude. Ping pong launched me into the next chapter and helped me reclaim the joyful sporty girl buried deep down inside. It’s also been great for my physical and mental health. It’s really true: “Move a muscle and it will change your mood.”  Another thing I’ve learned in the process is that for me, play is one of the best four-letter words.