Welcome back to this special series featuring the stories of the Senior Planet Sponsored Athletes as they pursue their fitness goals in 2020.

David Hill’s story is the third in the series; check out the first two here. After trading in his running shoes for a bicycle, a near-death experience brought David back to the track. Today, he shares his incredible journey: from crossing the pond, to crossing the finish line.

I’m thrilled to have been selected as one of the inaugural Senior Planet Sponsored Athletes. I hope my story can be an inspiration to everyone 60 or over who wants to be physically active. I was hoping to lead some runs and give talks and advice. Because of the current situation, that will have to be virtual for the time being. I look forward to meeting all of you.

I attribute my success to listening to advice from those wiser than me, community (especially my running club, the Reservoir Dogs), persistence, and putting in the work (however bad the weather is, and including three-minute cold showers every day for three months, before the New York City Marathon). I also attribute it to being chased up a tree by a rhinoceros when I was younger. Now, when I’m feeling tired at the end of a race, I visualize the rhino chasing me and my pace boosts 10 or 20%.

Here’s a little of my story, so you know some more about me. I was born in 1957 in London, grew up 30 miles north in Berkhamsted, studied at the University of Warwick, and worked for a short time in Oxford. I emigrated to America in 1980 and have lived in New York ever since.

“I’d never run a long-distance race but thought … how hard could it be?”

Until recently, I ran for fun, but was not particularly fast. I ran cross-country in high school but stopped when I went to university. After almost being killed after being hit by a van on my bicycle in 1983, I started running again. I was above average, but never a top runner.

In 2014, I was inspired by a university friend who had come from England for the New York Marathon.  He told me he had run multiple marathons in the previous 12 months. I’d never run a long-distance race but thought that if he could do this, how hard could it be? I started training (the FIRST three-day-a-week plan). I signed up for and ran the Central Park Half Marathon in February 2015 and it went well. Next May, I ran the challenging, hilly, Riverdale Half Marathon in 1:31 and came in second overall. I discovered that I was good at this. 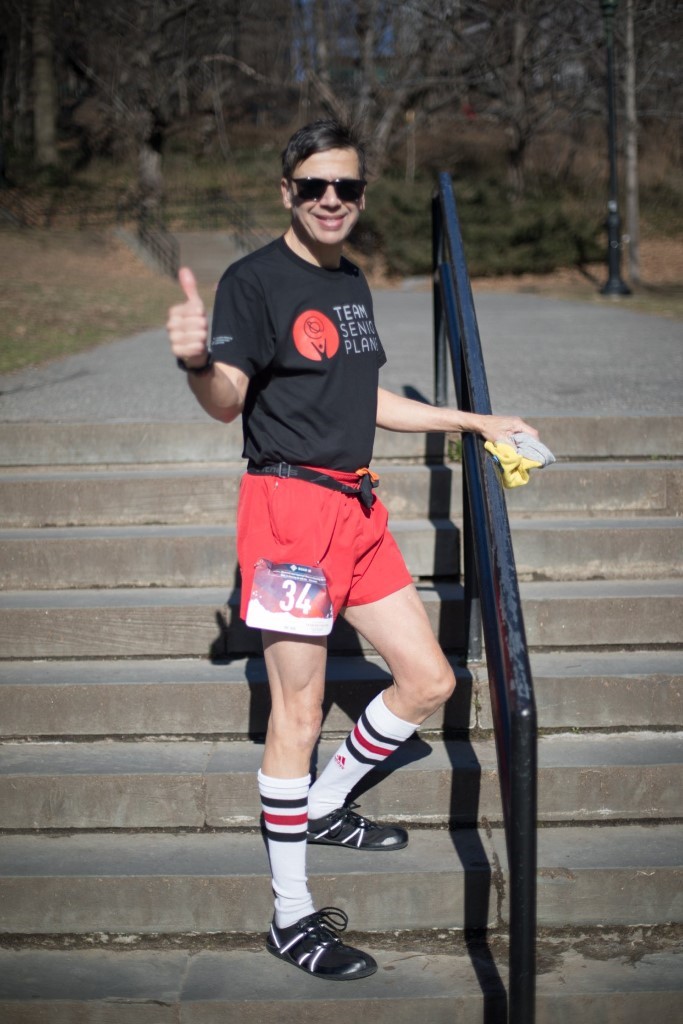 In October 2015, I ran my first marathon — Yonkers (the city of hills) — and came in second in my age category, 40th overall, and qualified for the Boston Marathon. I came second in my age category in the New York Half Marathon, and since then, have been offered guaranteed entry and a special local competitive runner start for each New York Marathon. I had been volunteering for it for the prior 20 years, leading an Elite Runner Fluid station volunteer team.

Before my first NYC Marathon I was in an episode of the AARP short video series, Disrupt Aging, about seniors who defy expectations about age, in conversation with a millennial in a similar field. I’ve taken it up a notch in the past year, winning my age category in seven races and earning guaranteed entry to the NYC, Chicago, and Boston marathons.

As well as running and yoga, I also do Mind Maps. My “Rebuilding Downtown Manhattan” mind map was acquired by the Museum of Modern Art and the 9/11 Memorial Museum.

I’m looking forward to an exciting and rewarding year as a Senior Planet sponsored athlete.”