Meet Burr Daly. He’s one of the 2020 Senior Planet Sponsored Athletes, and he’ll be sharing updates on his journey as an older athlete with us over the year. Today, Burr’s taking us through how he found a new fitness goal after some life-changing surgery: at 81, he’s striving to compete in speed-walking.

“I have been a USA Track and Field and Senior Olympic sprinter and jumper for 25 years. These are races of 50 and 100 meters and long jumps, triple jumps and high jumps. I started at the age of 55. It’s never too late. I have a whole wall of medals and awards, which include twelve age group All- American distinctions and thirty five awards for being in the top 10 or top 25 in the USA. But that was before my partial knee replacement of a year ago. 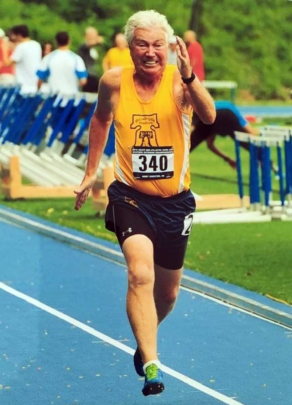 With today’s advanced partial knee replacements, you get up and walk immediately after you wake up after surgery. My physical therapist was amazed at the results after two month of intensive therapy and the range of motion achieved. She said I could do almost anything. Unfortunately, I took her too literally. I went out and trained too hard—sometimes being too competitive is not good. I went back to the doctor and they X-ray’d my knee. Everything was fine, but I was told to cut back. So I did.

So it was a shock, then, when they said—after one year—no running or sprinting again. Ever. I was devastated. Track had become a big part of my life, and actually the intensive exercise was important to my health. One of the most important things in later life is friends and companionship. I had made friends with many folks through track meets all over the USA, and giving up track was a big loss. I later talked to a friend who is an orthopedic doctor, and he said that the procedure I had done wasn’t necessarily the right choice; he would have recommended a full knee replacement. However, my knee does feels more like a real knee with a partial knee replacement, since the ACL (which allow lateral movement) was not removed.

“One of the most important things in later life is friends and companionship.”

After some time, I shared my story on Facebook with friends, relatives, and members of my track team, the Philadelphia Track and Field Association. I received an amazing amount of support and all kinds of suggestions on what alternative actions I could take, most of which related to track and field.

I personally thought speed walking, which is a USA Track and Field event, would be a good new goal for me. It is also on the agenda on many Senior Olympics and Senior Games meets. It is a big difference, however, between sprinting and speed walking, where one foot must always be on the ground and the distance is 1,500 meters not 100 meters. But this will be my new challenge at age 81. It’s never too late.”