Blaring car horns, the drumbeat of construction jackhammers, and the shrill shrieking of car alarms, fire trucks, ambulances and police cars—these sounds are part of the City Living Package (along with those nice restaurants and cultural events). If you think noisy city living has affected your hearing, you’re not alone, and now there’s proof. According to research by an online hearing test provider, there’s a connection between a city’s ambient noise and the populations’ hearing loss.

Mimi Hearing Technologies’ research estimates that if you’re the average city dweller, your hearing loss is equivalent to someone’s 10 to 20 years older than you. In other words, your hearing may be older than you are. (Now do you regret standing too near the speakers at all those concerts?)

Here’s a look at noise pollution and hearing loss in several cities (or check out the interactive chart on the Mimi minisite). 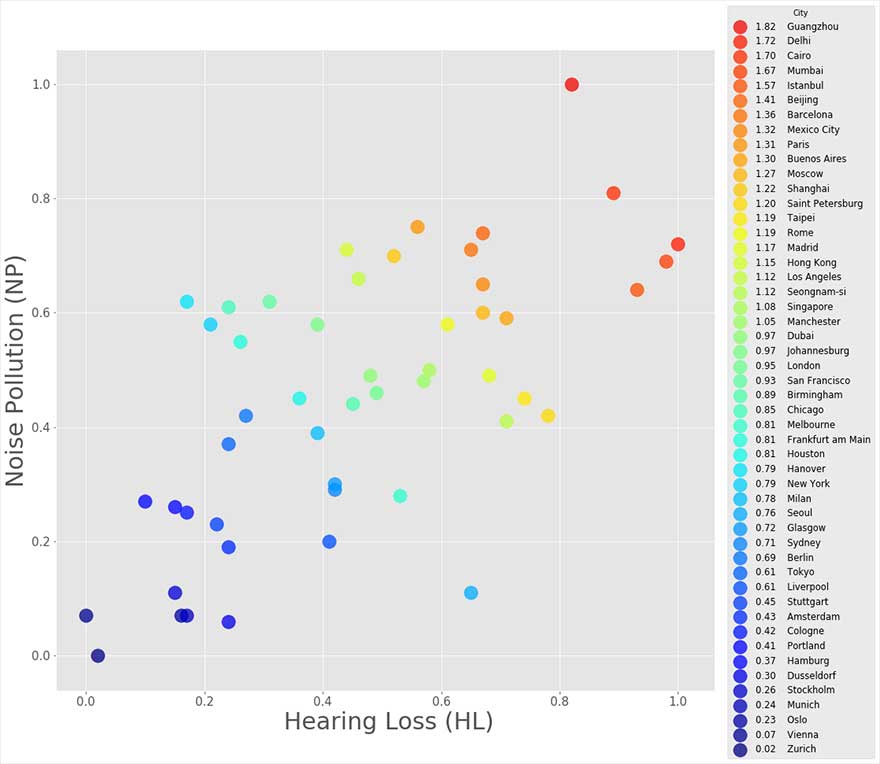 In New York City, the noise pollution rating is .58—not bad considering the near constant construction and traffic noise, plus those omnipresent speakers in restaurants all set to 11.

This chart reveals that the average age of New Yorkers’ hearing is 12.3 years older than their chronological age. The combined hearing loss index is .79. But it’s all relative. Los Angeles weighs in with a “hearing age” of 14.47 years older than chronological age (and plastic surgery can’t do a thing about it), and the combined hearing loss index is an ear-ringing 1.12. Even Houston is noisier than NYC. And if you’re traveling to Guangzhou in China, Cairo or (sadly) Paris, pack your earplugs. These three cities ranked in the top 10 for the noise pollution.

The quietest city and the lowest rate of hearing loss? Zurich.

Here’s how some of these cities sound.

The data was collected from thousands of users of Mimi’s app-based hearing test and the World Health Organization’s data on noise pollution; the findings were released to coincide with the WHO’s World Hearing Loss Day, March 3.

One response to “My City’s Noise Pollution Causes What?”