Meet the new “Old Age.”  We’re not talking about a NY Times blog. And this is not your grandmother’s old age. This is 41-year old architect Matthias Hollwich, declaring himself to be ‘old’ because he’s passed the halfway mark of a German man’s average life expectancy.

Hollwich is co-founder of HWKN (an NYC-based architecture and concept design firm), as well as a cofounder of Architizer, a social media networking platform for architects. But he is not just an architect with an impressive background. He is the embodiment of “New Aging,” a revolutionary rebuttal to such concepts as “aging in place,” “nursing homes” and  “retirement communities.”  (In his presentations, he crosses out “retirement” and replaces it with  “empowerment.”   “Elderly people” is distilled to “People.”) 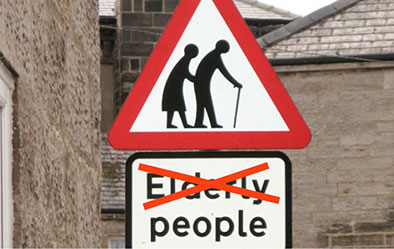 Hollwich is fond of saying that there are 17,000 nursing homes, and 17,000 reasons not to live in each one of them. He characterizes them as “storage facilities.”  (The Eden Project, he notes, is a singular exception.)

Over the past few years, he has been a tireless advocate for community-based living options that go well beyond the traditional concept of housing for older people, organizing design conferences and presenting at such design, cultural and aging events as well as giving TEDx talks.  As a visiting professor at U Penn’s School of Design, he organized the New Aging Conference, and is developing a series on reinventing nursing home design.

So, what does he offer as an alternative?  Plenty: conceptual designs or proposals for planned communities have included: the LGBT-focused BOOM in Palm Springs, CA; another Boom in Spain’s Costa del Sol; the Bauhaus Foundation’s Geropolis in Germany; MAX, a micro-unit “community incubator” in NYC; and Aging in Africa, a retirement community for Catholic priests in the Ivory Coast.

Many of these proposed communities feature an abundance of common space, places for people to socialize, to enjoy the outdoors. The actual living space is smaller and not as “hierarchical.”  For example, bedrooms might all be master bedrooms, because people might be living in groups of friends or siblings, rather than parents and children.

In his own case, Hollwich grew up in a multigenerational household. He was close to his grandmother and was witness to the process of her aging, her attitude towards her loss of independence.

As Hollwich is the first to admit, the key to his New Aging is about more than the built environment (no matter how wonderful it is!).  He recommends that we “live the life we want,” suggesting that such a life might reasonably include:

He advises us to “start thinking about aging early.”  If you incrementally adjust your expectations and circumstances along the way, you won’t be so traumatized when, for example, you can no longer drive.

Another piece of advice:  greatly extend your concept of “family” so you have a broad, far-reaching support network.  Whether it’s because of his strong support of LGBT issues, including LGBT-focused communities, or just common sense to not rely solely on one’s offspring for everything, this approach is one that runs counter to today’s prevailing infantilizing vision of family “caregivers” and their “loved ones.”

One response to “Meet the New “Old Age”: Matthias Hollwich”