When performance artist, activist, educator and author Lois Weaver decided to start working on a show about aging and sex, she pulled out her old blonde wig and cowboy boots. No, it wasn’t part of some kinky game. Instead, she transformed into her longtime alter ego, Tammy WhyNot, a mature former country singer turned downtown performance artist who helps Weaver facilitate conversations with real people about taboo topics.

Originally commissioned for London’s Chelsea Theatre in 2008, “What Tammy Needs to Know about Getting Old and Having Sex” was initially more of a performance-lecture. But after being awarded a 2014 Guggenheim Fellowship, Weaver set out to transform the piece into a 60-minute interactive show with plenty of audience involvement.

Perhaps best known for co-founding the renowned lesbian theater troupe Split Britches with Peggy Shaw and Deb Margolin, Weaver worked with groups of seniors (whom she affectionately calls “elders” in a nod to the Native American sense of the word) in Zagreb, Croatia, where she lived in a retirement home, and New York City, where she partnered with senior centers.

During playful and intimate sessions, she inspired participants to share details about their lives, sexual and otherwise, and is even coaxing some of them into joining her onstage at La MaMa Experimental Theater.

“Lois arrived at the Sirovich Center in her Tammy outfit with her blonde wig and the whole thing,” remembers Topaz, an 80-year-old singer who’s doing a duet with Weaver. “She would give the beginning of a sentence and ask each one of us to complete it. The first one was: ‘When I think about sex, I___.’ Some women were uncomfortable, but I loved the idea. So I said, ‘I get very excited and I want more!’ It was like a sex improv group.”

Conceived, directed and performed by Lois Weaver, and written in collaboration with her longtime creative partner, Peggy Shaw, “What Tammy Needs to Know” is Split Britches’ second show this year examining the impact of aging, following Shaw’s post-stroke odyssey “Ruff.”

In between rehearsals and fighting a nasty fall cold, Weaver called to chat about the evolution of the show, how she got seniors to spill their secrets and what aging with attitude means to her. 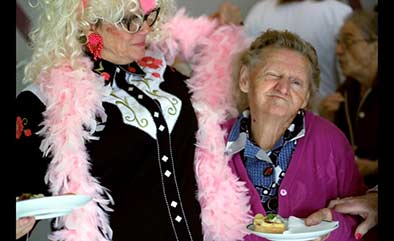 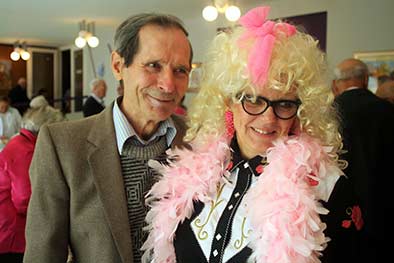 Lois Weaver as TammyWhyNot, with seniors in Zagreb

You’ve been using your outrageous alter ago Tammy WhyNot to explore a wide variety of topics over the years. But “What Tammy Needs to Know About Getting Old and Having Sex“ sounds a bit different.

Yes. I’ve used a talk-show format for Tammy shows in the past, but this time I wanted to push myself; this is the most singing Tammy has ever done in a show. The premise is she’s preparing for a concert tour for her comeback album, which is all about getting older and having sex. The audience members are my VIP guests, and I’m running through the songs in advance of the actual performance. I like to think of it as a sound check, which is a great metaphor for life: We work and work and work and finally get it all together, and then the show is over.

Is all of the material in the show new, and what kinds of aging issues do you examine?

[Most of the] songs are new and came out of issues I encountered while working with elders in Zagreb, Croatia and New York City. What it’s like living with dementia or with loved ones who have dementia; sexuality and sex when you’re older; the relationship between regret and satisfaction – that’s what I’m talking about in “Too Full to Finish.” I deal with what I call age fright, the fear that we won’t be able to perform the way we used to. “How Do You Sing a Broken Song” came from with working with Peggy [Shaw, who plays Tammy’s roadie in the show] through her stroke and what it means to perform in a broken way. What does it mean to live with things you can’t change? How do we work with what we’ve got? And of course, the meaning of “This Lemon’s Still Got a Whole Lot of Juice” is obvious.

Speaking of getting old and having sex, you recently turned 65. How has that impacted your life?

I’m Medicare eligible as of last week! I have started to feel a change in my own levels of desire. If I followed the common wisdom, I’m through menopause, so as a result of my lack of hormones I won’t want to have sex. But I don’t know how true that is. I think hormones pushed me out of the house at 11 o’clock at night to go to a club and flirt with someone! But in terms of physical intimacy with people, it’s still vibrant for me, and I’ve been encouraged by seeing how creative other elders are at reinventing sensuality for themselves. One guy I worked with gets physical satisfaction from teaching women ballroom dancing!

He appears in the show, right, along with many of the elders you worked with in NYC?

Yes. There’s a group backing me up on a few numbers and learning choreography. Have you seen that YouTube video of the 97-year-old woman dancing on the street in Havana? I’ll be singing “I’m Stuck Between Polish and No Polish at All” while she’s onscreen, and the elders will be dancing along with her. I’m also doing a duet with Topaz, “The Stars Fall.” One guy does dirty limericks and the ballroom dancer I mentioned will do some routines with one of the women. I’ll also have mini-discussions with people onstage and in the audience. I hand out these little fill-in-the-blank cards just like I did in my elder workshops: “When I think about sex I___; I feel desire when ___; If I had a secret sex life, it would be ___ .” I get people in the audience to respond so it becomes an intergenerational discussion. I like to play with the conventions of performance and subvert them so I can have a proper conversation with the audience as opposed to me being the performer and them being the viewers.

Were there any marked differences between working with elders in NYC and Croatia?

Croatia has a heavily Catholic population so there’s a lot of repression toward sex. I couldn’t just sit down and say, “Let’s talk about sex!” Instead, I said, “Let’s talk about your first kiss, your last romance, what gets in the way of you wanting sex,” etc. By the end, they were telling me stories of seniors getting together in the elevator having sex! But it was totally different in NYC. We cut straight to the chase! The senior centers I worked with were keen to advertise it as conversations about sex, so the group was somewhat self-selecting.

The idea of performing—both what we do onstage and in the sexual realm—is affected by everything else. Our fears impact our performance and our ability to connect. We think everybody is having these amazing sex lives, but we all kind of worry and stumble and don’t get it right and fail, and we never talk about that. And we especially don’t discuss what happens to the aging sexual body.

That’s a perfect segue for me to ask what “aging with attitude” means to you?

It’s finding the positive response to the situation you’re in, whatever it is. I have this thing I do when I start working with anybody. I say, “We’re going to work with what we’ve got,” and I have them pull things out of their pockets, and we make a performance out of that. For me, aging with attitude means accepting where you are and working with it, and not succumbing to any negative aspects.

Trailer: What Tammy Needs to Know About Getting Old and Having Sex from Claire Nolan on Vimeo.

One response to “What Lois Weaver Knows About Getting Old”

Open Thread: Back to Normal Yet? Feel safe?

Are you getting whiplash yet?
Book Club