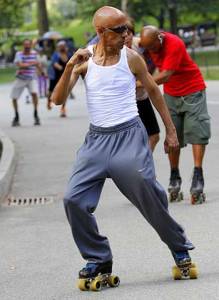 Roller skating might not be the first thing you think of when you think senior pastime, but it’s a lifelong passion for many regulars at the Central Park Skate Circle in NYC, who are back to boogieing now that Spring has sprung.

The seasonal weekly event features live DJ’s and attracts skaters of all ages, including some who’ve been skating in the park since the roller-disco scene’s heyday in the late 70s. Back then, the park’s Dead Road had become a gathering place for skaters to boogie down to their favorite tunes. Forty-something years later, those former disco kings and queens are part of a blossoming skating community that’s tight knit but welcomes newcomers.

Among the regulars is Robert Dea, who stumbled on the circle four years ago and was asked to take the “family photo,” an annual tradition on opening day. Although he’s not a skater, he’s been returning every year and now has a Flickr stream of photos. “I was attracted by their energy and try to capture it.” His photos help tell the story of intergenerational fun – with great music.

The power of community 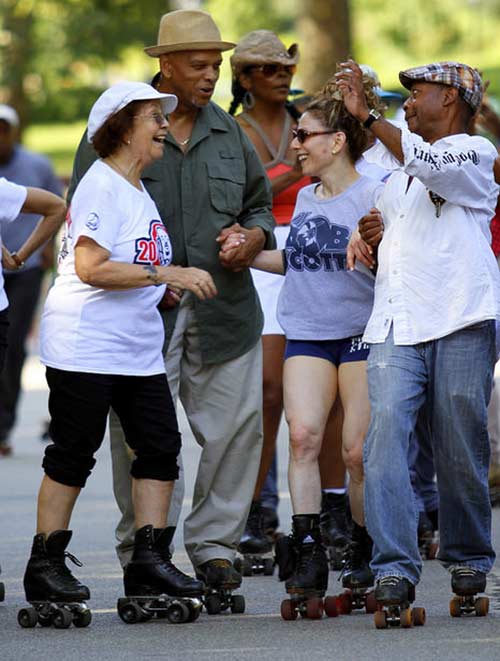 Ironically, this skating community might have had its biggest boost from its most serious threat: a New York City amplified music ban that was passed into law during the Giuliani days in 1995. In response, some of the skaters formed the nonprofit Central Park Dance Skaters Association to preserve the tradition and maintain the community that had become a staple of the park.

It’s April 11, opening day of the skating season for the Central Park skaters. Before the music gets going, a small group has gathered early to prepare. While some simply practice moves, others help out by setting up barricades, sweeping, and hooking up speakers and DJ equipment. The music starts, more skaters arrive, people greet each other and hug or kiss. The bonds of long friendships are clear to see. Some skaters glide around solo, while others pair up, exchanging partners every so often. Groups of three glide around the circle, arms locked together. 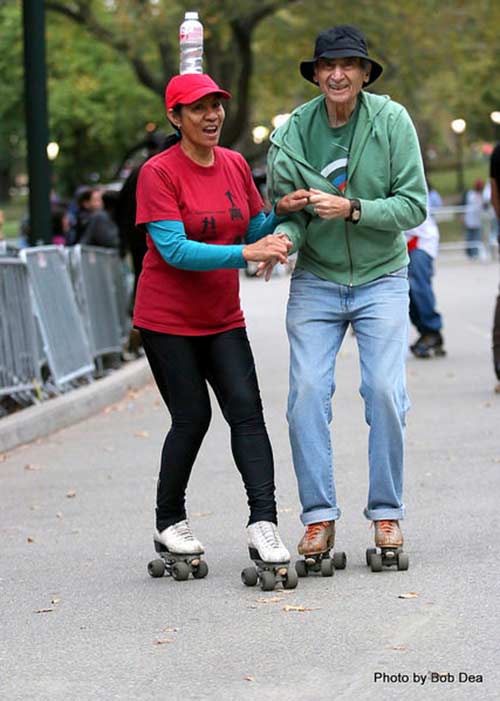 Robin Ostrow was fascinated by the diverse mix of the skating community when she fell in love with skating in her mid 20s. Now 62, her closest friendships are with those she met skating, and she credits these seasonal friends with helping her through difficult times. Skating became a healthy way to channel her compulsive behavior and provided her with the sense of community and friendship she need after her father’s death. “I don’t expect to be skating in my 70s, but I’m returning this year. It’s what I do in the summer.” 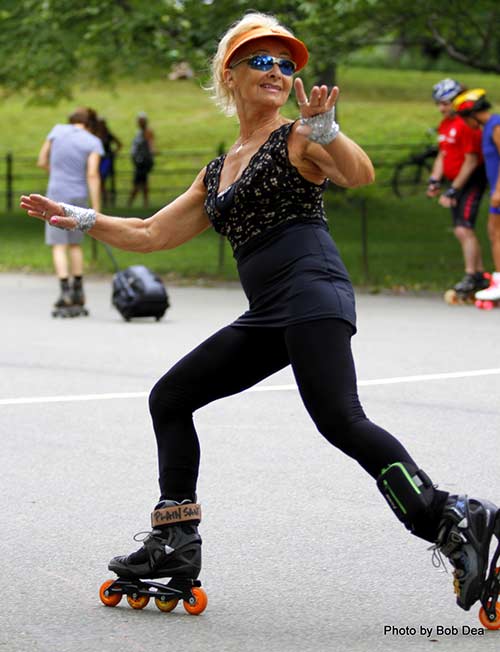 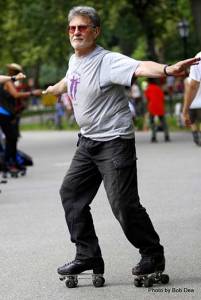 Bob Nichols, 68, current CPDSA president and self-proclaimed roller skating advocate has been an active member since it’s formed. He says he enjoys skating as part of an active and healthy life, citing the sport as an easy way to burn calories and stay in shape. He chose skating because “It’s not as demanding or as competitive as other sports.”

While Nichols believes it’s easy to continue skating as you age, he recommends taking precautions to prevent injuries: protective padding for those over 50 including wrist guards and maybe even a helmet. He also suggests regular exercise to strengthen legs and ankles.

James Singley, sometimes called the black Fred Astaire on skates, compares skating to “when you kiss somebody you love and it just feels right.” A skate instructor and regular at the skate circle from its beginnings, he encourages people not to let age or injuries stop them from skating. It’s all in their head, he says, and by taking small steps it’s possible for pretty much anyone to pick it up – although he warns that falling while skating comes with a big risk – breaking your tailbone. He recommends taking a class to learn how to fall properly and wearing protective gear, including butt padding.

In NYC, the Central Park skating season runs from April to October. Weather permitting, sessions are held every Saturday and Sunday from about 3pm to 6pm, excluding several weekends when the circle is closed due to other events taking place. The skate circle is located on Dead Road, west of the Bandshell and east of Strawberry Fields and the Sheep Meadow. Skates can be rented from The Skate Truck. 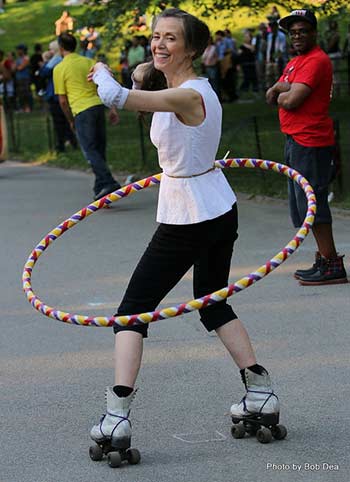 When did you last go roller skating?

4 responses to “It’s Roller Disco Season, and Seniors Are Boogieing”