You’ve probably read about radical life extension science and the funds that are being poured into finding a “cure” for aging. Several tech giants, including Google, have joined pioneers like Aubrey de Gray in what is often characterized as a search for immortality.

In actuality, much of the research is targeted at increasing what’s being called “healthspan” along with lifespan. If we can harness the power of biotechnology to figure out why we age and how to slow the process, then not only will people live longer, but they’ll be less likely to suffer from diseases of aging such as cancer, Alzheimer’s, diabetes and heart disease. Our lifespans will be longer, and we’ll be healthy and productive into much older age.

At least, that’s the argument in favor of “messing with nature,” as some people characterize life-extension research.

With more and more money being funneled into the field, more health data being crunched and chances increasing that scientists will crack the aging code, it’s a good time to examine the arguments. That’s what Intelligence Squared U.S. will be doing in a heavyweight debate between leading life-extension scientists (including de Gray) and ethicists (including Paul Root Wolpe, a founder of neuroethics). Learn about the complete panel here and read what the panelists have written on the topic here.

The debate, at New York’s Kauffman Center, follows a classic format — but as in all Intelligence Squared debates, the audience weighs in ahead of time via an electronic poll and again at the end of the event; the extent to which opinion swings between the two polls determines the winner of the debate.

Non-attendees weigh in, too, by voting in an online poll. At this time, the public poll is showing most people disagreeing with the premise that at an average 78.8 years, lifespans are long enough.

Take the poll and watch the livestream at IntelligenceSquared U.S.

Update February 5: Is our current lifespan long enough? The No vote won handily in the February 3 debate, with a majority of the vote and a larger part of the Undecided slice shifting its way. You can still watch the archived livestream of the debate here and vote in the public poll. 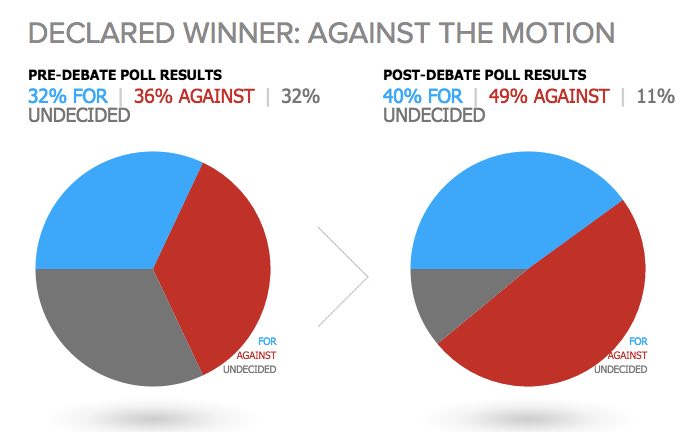 What do you think about radical life extension? Watch the debate, then share your opinion in the comments below.