Jonathan Ned Katz is a scholar, historian, activist, and visual artist. The author of 7 books, his ground breaking work, Gay American History: Lesbians and Gay Men in the U.S.A., was first published in 1976. His latest book The Daring and Dangerous Times of Eve Adams came out last year. Senior Planet spoke with Katz, 84, at his home in Greenwich Village.

SP: How did you get started in this work as a gay historian?

JNK: I have been doing this since 1971. I wrote a play called “Coming Out” and it opened at the Gay Activist Alliance building in 1972, a perfect time and place for a gay liberation play. My mother read the ad for the play in the “Village Voice” and called me up and asked “Is that you?” That’s how I came out to my parents, the beginning of a new, positive relationship.

My father was very interested in African–American history. I grew up with discussions of history at the dinner table.  My father (an art director in advertising) was a great influence on me and so was my mother (a magazine editor). The fact that I’ve written about Native American history and African-American history came from my father’s wide angle vision. But my focus is on sexual and gender history: the history of gay men, lesbians, transgender and heterosexual people.

SP: When I read Gay American History I was amazed you had information about homosexual activity from the colonial period, the Civil War. How do you find this information? Where did you get these research skills? You pride yourself on the fact you don’t have a PhD or even a college degree. I read that you refer you to yourself as a historian/detective.

JNK: I learned the skills by doing it. I scoured the archives. I went to a party and someone told me Alexander Hamilton wrote love letters to John Laurens. I looked it up in the NYU Library. Queer librarians got me in since I was not a student. That was published in Gay American History and because of the Broadway play about Hamilton it is the most looked at piece on the www.outhistory.org website (created by Katz in 2008).

What I do is like detective work. I’m a tracer of missing persons. From the beginning I have always looked for and evaluated the original evidence. So they could not say he made this up. When researching a doctor who transitioned from female to male in the 1930s, a medical journal article helped me track down Alan Hart’s original name and honor his amazing history.

SP: Why is this work so important especially the digging up of the early history? I think most people only know what happened since the Stonewall riots 1969 but your work goes way back before Stonewall.

My research is activism. It gives us back to ourselves.

JNK: It is really fun to be part of the movement to recover this long suppressed history. My research is activism. It gives us back to ourselves. The more I know about queer history, the more fascinating and complex it becomes. The world was so different in the past. There was a death penalty for sodomy!

SP: Could you talk about what’s happened in the past 50 years since Stonewall? When I came out as a lesbian in 1975 I could not have imagined we’d have same sex marriage and a gay man in the cabinet. What is your reaction?

JNK: So much change happened so quickly. We have made more progress than other minorities in a shorter space of time. Maybe because powerful privileged queer people wanted a seat at the table. In the early days, we wanted structural change to the unequal system. It was more revolutionary and that changed to wanting to fit in. The LGBTQ movement has been highly successful at integrationist politics. I’m glad for the success. I benefitted greatly.

SP: You created the outhistory.org website. It seems very active and provides a space for the general public to do research and get published.

JNK: Yes, just regular people get inspired to do research. The website contains some original historical finds that are nowhere else.

I want to reclaim the word old as positive, the way we reclaimed the word queer.

SP: Can you talk about being an older writer. You’re 84 and very prolific. You published a new book at 83. How do you remain so productive? Any tips?

JNK: I enjoy working at projects. It keeps me going. I’m engaged with the world. I read the New York Times carefully every day.  I’m also an artist who had a one man show in New York in 2013.

SP: What is it like to be a revered gay elder? In 2012 you were honored by SAGE (Services & Advocacy for LGBT Elders) for being a veteran activist and a champion of change.

JNK: I’ve been lucky. Some people are only recognized after their death. In my 60s, I came out as “old” and started talking publicly about being old and gay. I want to reclaim the word old as positive, the way we reclaimed the word queer. 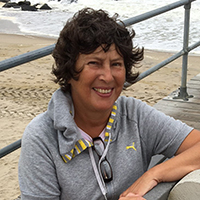 Kate Walter is the author of two memoirs: Behind the Mask: Living Alone in the Epicenter; and Looking for a Kiss: A Chronicle of Downtown Heartbreak and Healing. Her essays and opinion pieces have appeared in The New York Times, Newsday, New York Daily News, AM-NY, Next Avenue, The Advocate, The Village Sun and other outlets. She taught writing at CUNY and NYU for three decades and now works as a writing coach.