When we hear the word “nudes,” we expect to see young bodies – the smooth, taut ones that painters usually paint and photographers photograph. Aleah Chapin, an award-winning artist who is quickly making her mark on the art world, paints a different type of nude: She makes huge, hyperreal paintings of older women’s bodies with all their wrinkles, sagging skin, cellulite, scars and grey hair.

In her series of oil paintings called the Aunties Project, for which she won Britain’s prestigious BP Portrait Award, Chapin captures her models’ aging bodies – and much more: joy, caring, support, humor and a “take me as I am” attitude. 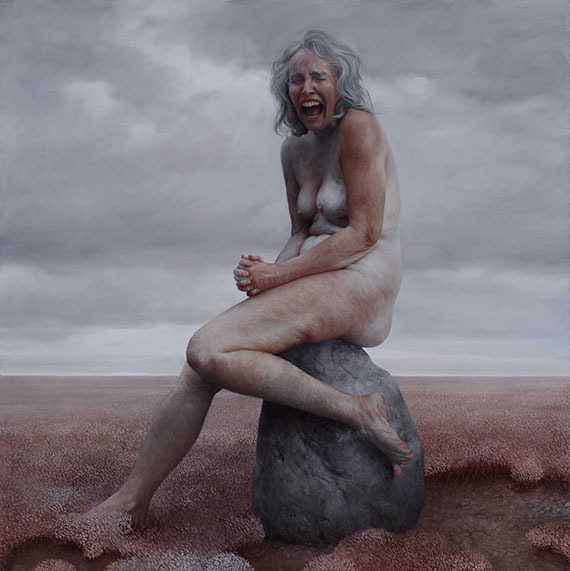 We asked Chapin a few questions about her work; she responded via email from her home in Brooklyn, New York.

How did you, a young woman in her 20s, became interested in depicting older women’s bodies?

I’ve been obsessed with realism since I was a child. But I noticed that the subject has mainly been the idealized young, female nude. Although these paintings are undoubtedly beautiful, I wanted to see something that mirrored the world I saw around me. The Aunties Project is less about age and more about making paintings that fully embrace the real human body, this fascinating vessel that carries us through our experiences. 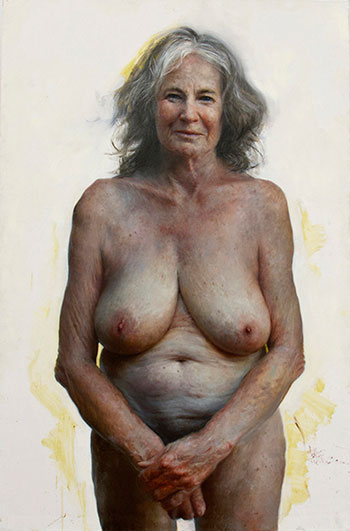 Is “Auntie” really your aunt?

My mom is the only woman I have painted who I am actually related to. The woman in the painting called “Auntie” was in the room when I was born and is one of many who call themselves the “Aunties.” This name refers to the fact that although we are not actually related, I grew up in a community of people who feel like family.

I chose to paint the Aunties, a group of women most of whom I’ve known my entire life, because they are people that I care about. I realized that the only work I could make with any honesty would come from my own life, and these women exemplify a certain outlook on the world that I was raised to have.

They seem so natural posing nude. Do they spend other time naked outdoors or was this just for you?

People have often asked me if I grew up in a nudest colony – which of course, I don’t blame them for thinking! But no, these women are not naked together very often. I asked them to pose and amazingly, they said yes. We’ve had several sessions where I get a group of them together outside and we take photos. It’s very much of a collaborative experience. I want to capture their reactions in the moment to me, each other and their surroundings. Life gives us an infinite outpouring of subtle emotions, physical manifestations of thought and experience that range from intense and dark, to hilarious and childlike. I want to make work that digs into all of this and everything in between.

These women look very comfortable in their own skin. Do you think they are unusual in that regard?

Yes, I think it is unusual. But as strong and confident as they are, they still have their own insecurities; they’re human. I think that they’re just more okay with everything that comes along with it, the good and not so good, and are comfortable acknowledging this fact. 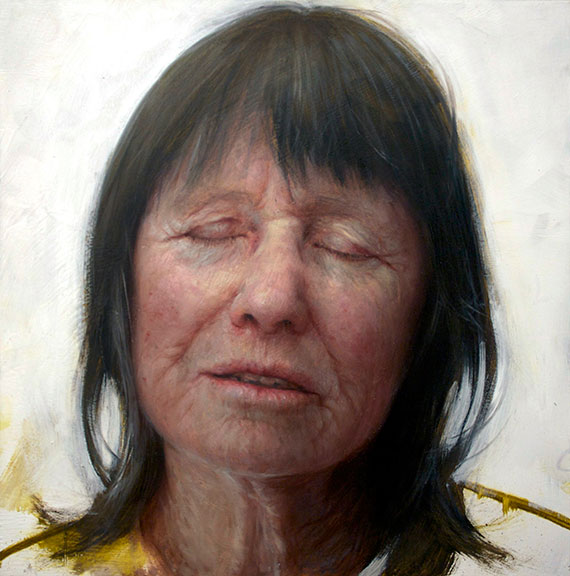 We sense camaraderie and support among the ladies.  Can you tell us more about them?

Most of them have known each other for 30 or more years. They are artists, nurses, dancers, mothers, grandmothers, business owners, therapists, writers, healers, funeral home directors, wives, activists and preschool teachers. My friend Eliza, in blogging about them, writes that they “have shaped history, raised children, explored the outer edges of consciousness and washed the dishes, and they are not finished yet!”

Our society overall has a cultural blind spot for older peoples’ bodies. What has been the response to the Aunties Project?

Hearing people’s reactions has been one of the most gratifying aspects of creating this body of work. I originally started the project for very personal reasons, having no idea what people would say and being really nervous to put the work out there. Surprisingly, people from all generations, sexes and nationalities react in the same way. It seems the paintings speak to a shared humanness that ignores our differences. This is nothing new. In fact, what it is to be human, to search for what unifies us as a species, is probably the most ancient idea. I think we’ve ignored this for a while, but it’s coming back because we desperately need it to. 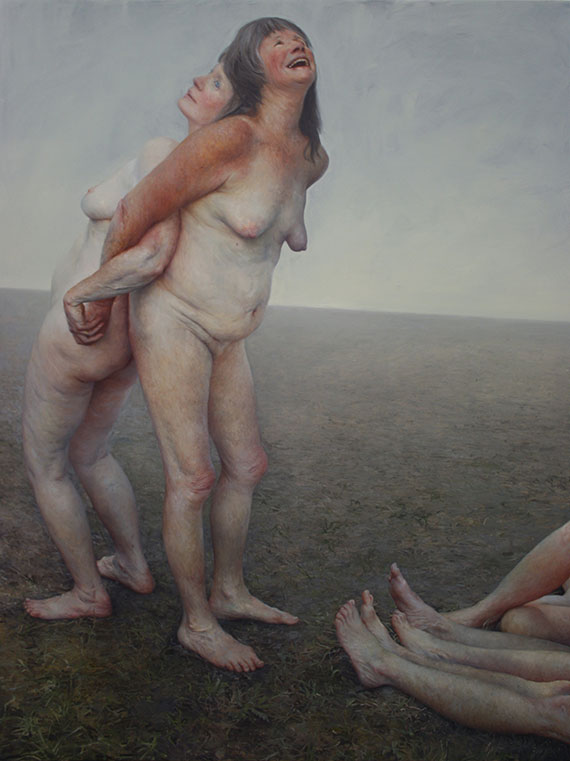 How has working closely with the Aunties Project shaped your perceptions of aging?

I was raised by these women, so I don’t think anything has actually changed, I’ve just become more conscious of it. I’ve always had great examples to show me that getting older doesn’t have to stop you from anything and is definitely nothing to be scared of. I can only hope that this feeling will last the rest of my life and that I can pass it along to my children.

Are there more exhibitions scheduled?  Do you have any other plans for the Aunties Project?

Yes, I do! I’m currently working on a solo show for fall 2014 at Flowers Gallery on Cork St. in London [a street of London’s top-tier galleries]. The Aunties Project is something I think I will always continue. It had a beginning, but I don’t see it having an end. I’ve begun to paint the younger generation, the daughters and grandchildren, but I think I will always paint the Aunties, too. My intention is to explore through paint, and the people who enter my life, the spectrum of the human experience.

What do you think about the Aunties Project? Please comment below.