Last time in  Aging With Geekitude, Erica explored the pros and cons of Mac and PC (take a look). This week, she’s on an emoji adventure.

That was as far as I ever got with keyboard emoticons – the type you make by typing punctuation marks – because I couldn’t remember what to type for a wink or a tongue sticking out. Plus they’re sideways, which is annoying. If something is funny, I still write “that’s really funny” or “that’s just awful.” Sometimes even <ha-ha> or <sob>is good.

But recently I discovered that those old keyboard emoticons have morphed into emoji – the Japanese word for “emotions” and that if you email, text or use social media like Facebook, and/or happen to have children or grandchildren, you’d better get with the program. Emoji are cartoonish versions of happy face, sad face, etc. Since the Japanese are in love with cuteness, animated emoticons or emoji have sprouted everywhere.

So, how do you make emoji?

It turns out that almost all mobile devices, programs and platforms now let you type clever cartoon emoticons. Even Facebook, which is congenitally behind the times, has added them. If you type :) in Microsoft Word, it automatically transforms into its emoji equivalent,

Here are some tips and tricks I’ve learned for making creative emoji. Try them – you might impress your kids and cute-tolerant friends.

Facebook recently made its emoji selection much more fun, with options to add feelings or activities to your status. You can  also add animated stickers to comments. Some are very clever.

On Your Status Click on the smiley icon next to the camera to find a whole bunch of options for what you’re doing or feeling. If you click on “feeling,” you get options like “blessed” or “exhausted” or “pissed off” or even “old.” If you click on “Looking for” you get selections like “a job,” “a cake,” “a partner in crime,” “dinosaurs.” It’s a lot of fun to figure out what to put in. Of course, there’s nothing for “working on.” I guess they assume that if you’re on Facebook you’re not working – unless you’re me.

In a comment  Even more fun: Click on the smiley to get a bunch of illustrations. such as Snoopys, smileys or cats; and definitely try the + sign for a bunch of sticker collections, some animated. I posted one of a girl and a cat that danced when you ran your mouse over it. My friends were impressed.

To add a sticker pack to your emoji, select the “Free” button under the ones you like. They are all terrific IMHO. (You know what that means by now, right?)

How to Make Emoji in Gmail

If you use Gmail, you know graphic options are not its strong suit – but wait! Some time ago, Gmail added a whole bunch more smileys, some of then animated.

To find them just hover your cursor to the right of the Send button and click on the smiley face that appears. Scroll through the faces and objects and click on any that appeal to you to add them to your email.

How to Make Emoji on an Android Tablet or Phone

Android tablets and phones have almost too many ways to get emoji. If you are running Android 4.4 – the latest version – on your tablet or phone, your default keyboard will come with a large selection. I like the ones that come with my Samsung keyboard. 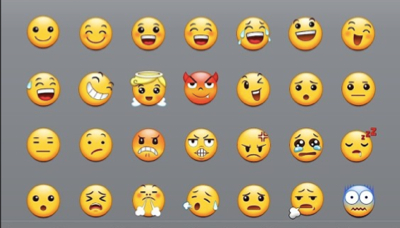 If you have an earlier version of Android, or you want even more choices, you can download a keyboard with emoji from Google Play. I tried a couple. The biggest and most popular is called the the ai.type keyboard. My daughter loves it, but I found it nightmarishly complicated. Then I tried the TouchPal, which is easy to use. You swipe the keyboard up from the bottom to find the emoji. In the end, I wound up going back to my familiar Samsung keyboard, which I like the best.

Go to Google Play to download keyboards. Then locate the keyboard in your list of Apps and activate it. Then go to Settings>Controls>Language and input/check the keyboard you want to use.

How to Make Emoji on an iPad or iPhone

That’s it! Now in email, iMessage, Facebook, Twitter and any other app, just tap the globe icon on your keyboard to switch to the Emoji Keyboard.

You can also download emoji apps from the App Store. Try Emoji Free for an unusual selection of very cute animated ones, along with holiday emoji, cats and dogs, and more (downside: you have to switch between this app and whatever you’re in – email, iMessage, etc to copy your desired emoji over).

Do you use emoji or smileys in emails or Facebook?   Do you send them just to your kids or to friends as well?

9 responses to “How to Make Picture Emoji”