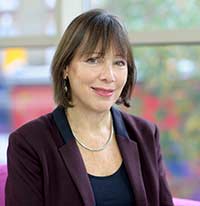 “The narrative of decline tells us aging is like a thief who comes in the night and steals your whole essence, your whole personality, and you become old. I think that’s a travesty!”

If we can recognize growing older as inevitable rather something to be resisted, then aging is simply living, and our challenge remains the same as it always was: to live an engaged life. It’s a message at the core of “How to Age” – a new primer by award-winning British journalist and sociologist Anne Karpf.

Karpf isn’t just interested in aging because she’s getting older. She grew up with older parents and is married to a man 17 years her senior. Karpf had the idea to interview Grey Panthers founder Maggie Kuhn way back “sometime in the 1980s” – long before aging was a topic.

In fact, Karpf says she had the idea for a book on aging several years ago. Trouble was, publishers weren’t interested. They told her “books on aging don’t sell.”

What a difference a few years makes. Now, together with Lynne Segal (see our Q&A with Segal, author of “Out of Time”), Karp is giving talks to a receptive readership.

“Something is in the air,” Karpf told Senior Planet by phone from her London home. “I want to to go back to those publishing houses and say, ‘You were wrong!’”

The book is titled “How to Age,” which makes it sound like we have control over it. Do we really?

One of my goals with this book is to alleviate the fear about becoming old — the narrative of decline that tells us aging is like a thief who comes in the night and steals your whole essence, your whole personality, and you become old. I think that’s a travesty! We remain our selves as we age, only older. But of course we change as well.

I think this fear of aging is setting in earlier and earlier. So we have this paradox: We’re living longer and longer on the whole than ever before, and yet we’re worrying about our health for longer.

Another thing I’m trying to challenge is that aging only happens at the end of life. Aging happens from the moment we are born. So if you say you’re anti-age, what you’re really saying is you’re anti-life.

Has it been easy to take your own advice?

I think you write the book that you need at the time.

A few years ago I was struggling with my own gerontophobia. I didn’t get the way the language of age denial and age resistance is a reaction to that fear of aging. I was following exactly the same path of stigmatizing age and being terrified of age that now I’m challenging.

We’re all faced with limited time on earth, and we need to acknowledge it and attend to aging. But I don’t think aging means necessarily that we become frail and a burden and a drain on resources, which is the way it’s so often depicted. I think very often we become a resource ourselves.

Your husband is significantly older—is he an inspiration?

My husband is going to be 80, and he’s the most dynamic person I know. I struggle to keep up with him! I’m going to be 64 in a couple months. My husband is remarkable, he just started learning the saxophone.

How much of how we age depends on our personal attitude versus the systems around us?

In general, in our culture being old is so stigmatized, we are inclined to not identify with old people; even when we are 60, 75, 85, we see a room full of people with gray hair and we say, “Oh, they’re old.”

If we identified with older people, we’d be lobbying for more resources, for facilities to be improved. England had floods recently that damaged a few thousand homes owned by the kind of people who vote for the Conservatives. David Cameron [Prime Minister and leader of the Conservative party] stepped in and said, we’ll rebuild, money no object. Wouldn’t it be great if he said, “aging population, money no object.”

So I think change on the personal level and change on the social-cultural level are indivisible. What we need to do is gather together and put pressure on politicians and institutions, and challenge ageism wherever we find it — and if it’s intergenerational, all the more so. We should be lobbying consistently and challenging people when they use ageist language and ageist terms, even tiny little things, like “she must have been beautiful,” as if beauty is incompatible with age. The problem is, we’ve all internalized ageism so much, we have to work on ourselves at the same time.

You have a chapter on gender. Did you hear Rush Limbaugh’s comment about Hillary Clinton to the effect of, “Do we really want to see this woman age in office?”

We had something similar here in the UK. We have a brilliant Cambridge academic, Mary Beard. She has long gray hair and the Twitter trolls were rubbishing her, saying, “how can she look like that, why doesn’t she color her hair?” She came right out saying, “More women in the population look like me.” She used her position to speak out instead of changing her looks. Each time somebody does that, it changes the public discourse just a little bit.

You mention in the book that “old age” is no longer listed as a cause of death on the U.S. death certificate. Why should we be worried about this?

I’m also a medical sociologist and I used to teach med students. There’s a lot of interesting research suggesting that part of the students’ motivation in becoming doctors is that they’re very uncomfortable with the idea of death and want to annihilate it.

But death is not a failure. It may be much worse to keep someone alive without quality of life.

We’ve got such hubris in Western culture — this idea that “my sensibility is so unique to me, how can it be extinguished?” One of my sisters-in-law is Indian, and she has a very different attitude. I think in Eastern or more collective societies, people think of themselves more as part of an organism, of a collective group, which I’m sure makes the prospect of death easier.

You talk about how the brain makes better connections as we age and give examples of people like Frank Lloyd Wright and Winston Churchill. But I didn’t notice many examples from the world of computer technology.

I think on the whole computer technology has been young person’s game. One of things that older people have is the experience of having lived before all this technological innovation and making do without it. This may be what we need: cultural memory of pre-consumerism in this age of climate change. That memory has begun to fade, because we feel that technology can do the remembering for us.

I think this is going to become vital. Maybe we won’t be reaching back but rather reaching forward: Our memory that it’s possible to survive, and survive quite well, without the things we think we need today is going to be an enormous resource in the future.

“How To Age,” the latest in Pan MacMillan’s School of Life series, is available on Book Depository.

4 responses to “How to Age: Anne Karpf on Creating a New Narrative”