I no longer spend a single minute on those who lie or want to manipulate. I decided not to coexist anymore with pretense, hypocrisy, dishonesty and cheap praise. I do not tolerate selective erudition nor academic arrogance. I do not adjust either to popular gossiping. I hate conflict and comparisons. I believe in a world of opposites and that’s why I avoid people with rigid and inflexible personalities. In friendship I dislike the lack of loyalty and betrayal. I do not get along with those who do not know how to give a compliment or a word of encouragement. Exaggerations bore me and I have difficulty accepting those who do not like animals. And on top of everything I have no patience for anyone who does not deserve my patience.”

It’s no surprise that this quote got some viral action on Facebook and across the Internet last week. But helping it on its way might have been its attribution: As it was shared again and again in the media and on social media, the quote was put into the mouth  – and paired with photos – of Meryl Streep. 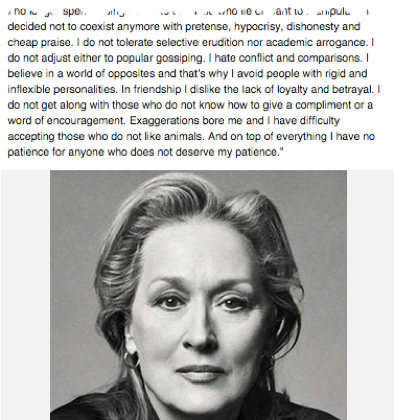 Who doesn’t love a great celebrity quote, especially a wise quote from an older celeb. It confirms one of our favorite myths: That silver hair equals wisdom.

The problem is, this quote is actually from the pen of Portuguese self-help author/life coach José Micard Teixeira – not a woman, and not an elder, but a younger man who is suddenly becoming the “not Streep” Internet celebrity of the month. 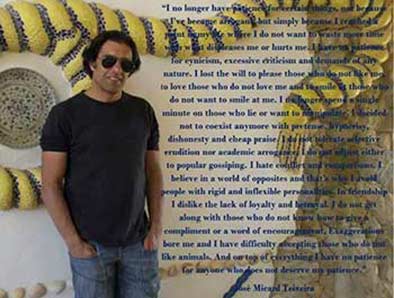 On his Facebook page,  Teixeira has asked his followers (a number that’s been growing fast over the past few days!) to visit the pages of people who’ve shared his quote and ask them to set the record straight; among these people are Julian Lennon and singer Janis Ian (165,000 people have liked the quote on Ian’s page and 150,000 people have shared it).

How did this all start? The “Streep” quote appears to have been posted on July 31 by a Romanian blogger who goes by the name of Ioadiceau – a woman who according to her “About” statement appears to be aging with plenty of attitude. “Never forget to be yourself even if it involves risks,” she says (according to Google Translate). 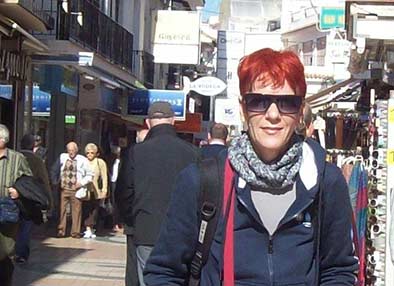 Ioadiceau may have found the quote elsewhere; it was posted on Facebook in mid-July by My Inner World (the Official Site of Tuncluer Textile Industry International Trading Inc. Co.!). But the version posted by Ioadiceau is the one that went viral.

Someone saw Ioadiceau’s Thought for the Day and shared it, and the rest is history. Nobody bothered to check the attribution of the quote.

Ever since the quote’s real author emerged, there’s been a lively discussion on Facebook about whether it even matters who said it – as long as someone said it.

Apparently, there’s a powerful desire to have Meryl Streep attached to this quote – somehow, anyhow. Look for the quote online now, and you’re likely to see the attribution: “Words Meryl Streep lives by.”

Meanwhile a new myth is spreading across the Internet: life coach Teixera is being described in post after post as “the great Portuguese author.”

Does your estimation of a quote about aging depend on who said it? We’d love to see what you think in the comments section below.