“The fact is, at age 70 I could possibly work creatively for another 15 or 20 years. That’s a whole lifetime. I had just been kidnapped by a depressing presidential campaign for a year and I wanted little to do with the daily news and a world in disarray. What was most exciting to me was my own vision, my inner world, how I saw things, using whatever gifts I’d been given and using them up completely.”

Turning 70 was a traumatic experience, so I thought I would make a film about it.

I’d been making documentary films for 30 years, working with editors, shooters, advisors, specialists, crew. But now at the age of 70 I wanted to try something else. I wanted to make a short movie like a writer writes a short story. Alone.

I barely have the technical ability to open a jar of applesauce, but I do know a little about current film technology and production, so I thought I might be able to make the journey from idea to screen solo. Online distribution platforms like YouTube and Vimeo would give me easy access to those screens—mainly small ones, on computers and phones. Editing software is becoming easier to use. Cameras are so consumer friendly, they seem to run by themselves. And the images, music and effects, all available online, make it possible to be writer, director, shooter, art director, designer, gaffer, gofer, actor, marketer and distributor all rolled into one.

If you want to, you can make a film alone at a desk.

Early on, I realized that working alone would present me with problems. By going solo I was not only sealing myself off from clients, but also from friends, compatriots and other professionals; a whole world of technical and artistic expertise, as well as travel and sociability.

Making a film by yourself backs you into an isolated corner—as does getting older. Somewhere on route to 70 one starts to become invisible. In film work we call this a slow dissolve. You just appear to fade. Maybe it’s the constantly changing technology. Maybe it’s the beautiful and ever-present fervor among young filmmakers, but what happens is this: You not only retire but you are, in fact, retired from the scene. While I wanted to work alone, I wasn’t prepared for how isolating getting older in a young person’s field would be.

You have few social discoveries to make in your seventh decade—you aren’t out much, and when you are, everyone is younger and you have less to learn.

So there I was, home alone. Fine. I would explore my inner landscape. Obsessive diarist and doodler that I am, self-exploration was a natural for me. But I learned I needed to practice it, at least in some part, away from the desk and out in the real world. It’s nice to have somewhere to be and something to actually do while trekking around in your inner angst. And so in the process of making this film, I developed a scaffold on which to build a relationship with both the outside world and myself.

For example, once I began shooting the film, I might find myself “on location” at my local Barnes & Noble with my little low-profile Sony NEX camera at my side. I might stash it on a bookshelf, turn it on, walk to the front of the store, come back, do a jig in front of the camera, record a scene, pack up and get out. Sometimes I’d buy a book.

This felt like an especially productive and entertaining way to be in a bookstore. I would end up doing this at supermarkets, on highways, in trains and while visiting friends in distant cities. I could both work alone and get out in the world.

Now, as I say, I have limited technical ability, so I knew if I was going to make a film by myself, I’d need a simple, intuitive editing system and I would have to love using it. For me, a low-tech filmmaker if ever there was one, this relationship with editing software would have to be a love affair.

I retreated to the seclusion of my home office, and started using Adobe’s Premiere editing software, because that’s what I used when I learned the little bit of editing that I knew. But my relationship with it fell apart fast as my story grew more complicated. I wanted to paint. Adobe Premiere was like working with surgical tools.

So I started a flirtation with Apple’s Final Cut X editing software. Suddenly the sun came out, it was all singing and dancing. I loved it. Undiscriminating filmmaker than I am, I simply started shooting things (any things), loading clips into my computer and playing with Final Cut X. I had no idea what I was doing or where this was headed.

The fact is, at age 70 I could possibly work creatively for another 15 or 20 years. That’s a whole lifetime. What else was one to do? I had just been kidnapped by a depressing presidential campaign for a year and I wanted little to do with the daily news and a world in disarray. What was most exciting to me was my own vision, my inner world, how I saw things, using whatever gifts I’d been given and using them up completely.

I couldn’t tell where the outside world was going, but inside I was making progress. I was putting something together. I have always been fascinated by the way words and images work with each other. Now I had some word-and-image manipulating machinery—let’s see what happens.

We have a guest house on our homestead outside of Albuquerque, New Mexico. I took refuge in a corner of it and locked myself in for two weeks with paper, pen, laptop and a dozen of my favorite books for inspiration. I wanted to create something that people I knew could relate to.

My film would need to be short. I knew people would likely watch it on a smartphone or tablet where the average attention span for video is about two minutes. But my story was going to be longer than that, so I decided to tell it in episodes of under two minutes each.

I saw “Seventy” as an episodic story with each episode having a bit of a cliff hanger ending. And I wanted it to be light—no heavy existential turmoil. The world needed smiles.

I walked out of the guesthouse after two weeks with a script in five acts about what I had done since closing up my production business.

Then I threw the script away.

I didn’t want a shot-by-shot script, just starting points. I was creating something that didn’t exist, not painting by numbers, and I wanted to be open to serendipity and chance. This was to be an exercise in my ability to let go. I would follow where the work wanted to take me.

I wanted to keep dialogue and exposition to a minimum because I knew sound can be an issue on mobile devices—and anyway, I didn’t trust myself to operate sound equipment. I would use the built-in mic on the camera whenever I could.

I wasn’t much more proficient with a camera than I was with sound equipment. I couldn’t pull off any really stunning shots—and I didn’t want to. What took master photographers decades to learn is now built into camera settings, and everyone’s a soft-focus genius producing creamy, beautiful images. None of that for me. I’m a writer and I like it rough. I would keep the camera on its flattest, most basic automatic settings.

I took endless notes, gave them to myself and headed into production. In the morning I would meet with myself and all of my teammates: lighting, costume, script, camera, sound — me, me, me and me—and my tripod.

I was the lead, indeed the only actor. I directed myself, reviewed “takes” with myself and, after turning the camera on, ran around to the front of it for endless reshoots and pickups. Later, I sat with my editor and writer, me and me. No meetings, no call sheets, no urgent texts, no hard feelings, no nothing.

The film, was driving, I was just along for the ride.

Editing and the Acorn Theory

I read and re-read James Hillman’s “The Soul’s Code.” Hillman is the astute and delightful Jungian Psychiatrist who postulated what he called the “Acorn Theory”; there is an innate part of us that exists from birth, even before birth, and it calls out to be lived. Our job is to listen for it, find it and follow it. Forever.

And I wanted to have fun. If I did it right and didn’t plan too much, that fun would come across on the screen. As I put scenes together, I found I didn’t need a lot of words. The picture would do the talking, and the music would keep the story moving. It became a silent film with title cards, something I never even considered when I sat down to write the script.

Music was my inspiration—the music I was using in my film and the music I had listened to most of my life. Rock and Roll. I don’t know if I could have made “Seventy” without Tom Petty. I must have listened to his new “Mudcrutch” song, “Trailer,” a thousand times over two months. I wanted something that sweet and simple.

Five hundred hours of video is uploaded to YouTube every minute. The moving image has become a commodity, like wheat. Most short films highlighted on video platforms have a polish and a refinement that in the past, only a team of disciplined craftsmen could have created. But that doesn’t necessarily make for art or even a decent three-minute video.

That’s what makes the recent explosion of film festivals so exciting. Most film festivals are carefully curated, many by true aficionados who sift through endless entries and can spot original thinking. They’re where people who appreciate the out-of-Hollywood experience go to watch films.

I had always done things for clients or with the idea of making money. Now I want people who have no investment in the product to watch.

Now I only want to make sparks and have fun.

My short film “Seventy” opened at the Taos Shortz Film Festival in March. In April it was featured in the Southern Arizona Independent Film Festival where it won several honors; Best Indie Film, Best Director, Best Editing and shared honors for Best Performance. 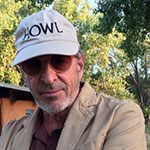 9 responses to “How I Made Seventy”